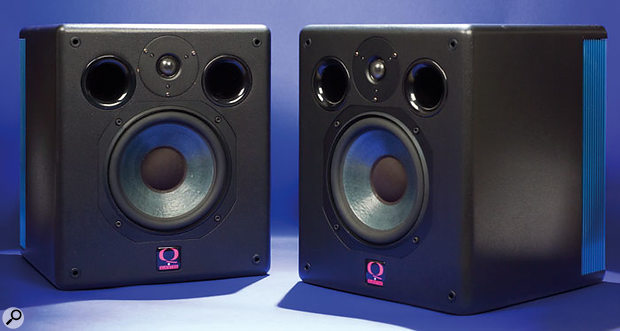 Big or small, Roger Quested's monitor designs always deliver the goods. His VS2108 actives are no exception.

Roger Quested has been building studio monitors for longer than almost anyone in the industry. Because he runs a small company, rather than being part of a large corporate machine, he is able to design speakers that satisfy him rather than just the company's accountant. In fact, most of the speakers that I really enjoy working with come from small companies, many of them British, and I think part of the reason for this is that the best speaker designers are almost clinically obsessive about what they do and constantly strive for perfection — even though they know they can never quite reach it. From what I know of Roger, he definitely fits into that category!

It is no secret that smaller project studios continue to increase in number, while the high end studio market is shrinking. So, like many other speaker designers, Roger has responded by designing appropriately sized systems to meet market needs. One of the first Quested monitor systems I saw was installed in a nearby pro studio. It comprised huge 4x12 cabinets that could have done battle with most PA systems — with a fair chance of coming out on top! These were passive speakers, powered by huge, external power amplifiers, and when the system was powered up, the owner swore blind that the lights in the village dimmed! Today Quested still builds big systems for those who need them, but it's probably true to say that the bulk of their production is now geared towards the small to medium sized studio market.

A little larger than most nearfield monitors, the active VS2108s have perfectly adequate bass extension on their own, so they work perfectly well as main 'mid-field' monitors. However, they can also be teamed with a Quested subwoofer to provide even greater bass extension and headroom, making them equally suitable for larger studio applications or surround systems. They have also been designed with the needs of producers in mind, especially those who like to take their own reference monitors around with them, though they are just as well suited to mixing, film and television post production, mastering, and multi-channel surround sound mixing.

Sonic accuracy obviously relies on low distortion, but also on paying as much attention to things like phase response and dispersion as to frequency response.

The VS2108 monitor is an active, two-way design, based around a custom-designed 200mm (8-inch) bass driver that utilises a dual-rear-suspension, long-throw cone, in order to combine a good transient response with low distortion at all operating levels. The subjective performance would seem to corroborate this claim. A ferrofluid-damped 28mm soft dome tweeter, designed with a wide dispersion to create a wider sweet spot, handles the high frequencies. Both drivers are set back within rebates machined into the baffle so their outer edges are flush with the cabinet surface. 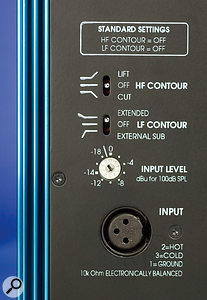 The rear of the Quested VS2108 monitor speaker is as uncluttered as the rest of the design. The HF and LF equaliser switches allow you to roll off either end of the frequency spectrum, and with the LF equaliser switched out (no roll-off), the system is still protected by a subsonic filter that introduces a 12dB/octave slope below 27Hz.This design turns its back on horn loading or waveguides — elements that Roger feels can be detrimental to the phase response, and which may even lead to increased distortion. Both drivers are magnetically shielded, allowing them to be used close to CRT monitors without causing picture distortion. The rigid, front-ported cabinet (13.5 x13.5 x16 inches, or 340mm x 405mm x 340mm) is made from 22mm MDF to ensure it exhibits minimal resonances. Though the 2108s look fairly plain, with their simple paint finish, their rounded edges help to reduce cabinet edge diffraction. Both plastic port inserts also have rounded edges to reduce port noise. There are no fancy innovations or radical new ideas, just solid engineering (the monitors weigh a hefty 22kg/48.5lbs), but then most speaker designers agree that optimising established design paradigms is the best way to achieve good performance.

While great attention has clearly been paid to the enclosure construction and to selecting appropriate low and high frequency drivers, the crossover circuitry and power amplifier design is also crucial to performance. To deliver adequate headroom, even at high operating levels, the VS2108's two internal amplifiers have a combined rating of 210 Watts RMS (110W woofer, 100W tweeter) where the output stages and PSUs are, we're told, over-rated by a factor of two just to be on the safe side. The analogue circuitry is described as audiophile and uses good quality components, but it also includes thermal protection and there's a clip indicator LED on the front panel to warn the user that they are pushing the speakers too hard. When the LED shows green, it indicates that the monitor is powered but this will turn red in the event of the amplifiers being driven within half a dB of clipping. The LED also turns red if the amplifier temperature rises to an unsafe level whereupon the speakers will mute until the heatsink has returned to a safe operating temperature. In addition to using the metal rear panel as a heatsink, there are also finned, blue, anodised heatsinks running down the sides of the cabinet on the rear corners, so overheating under normal operating conditions is highly unlikely. Internal switching allows the monitors to be used on 110V or 230V mains systems. A crossover frequency of 1.25kHz is used in conjunction with a 24dB/oct filter slope to minimise overlap in the crossover region.

The practical outcome of all these design decisions is that the speakers can deliver a maximum SPL of 108dB when three are used in an LCR configuration, so I assume the total will be marginally less for conventional stereo. In practice though, there's adequate level, whichever way you look at it and, with a frequency response of 55Hz to 18kHz (+/-2dB), there's plenty of low end, even if you don't use a sub.

No matter how well monitors are designed, the room characteristics and the positioning of the monitors within the room have a significant effect on the spectral balance of the sound reaching the listener, so in common with many other active designs, the VS2108 includes rear panel controls that allow the user to tailor the frequency response. A low frequency (LF) equaliser switch offers an extended bass setting (1dB lift below 55Hz), as well as a low roll-off setting for situations where the speakers are used in a system with a Quested VS1112 or VS1115 subwoofer. A three-way, high-frequency (HF) equaliser switch adjusts the high end (+1dB from 5kHz or -1dB from 6kHz) while an 18-position rotary switch handles the input gain setting in 2dB steps. Using a stepped switch is a good idea as it makes it easier to correctly match the gain of the two monitors. Connection is via a balanced XLR socket with RF filtering (-3dB at 25kHz, 6dB/octave) to keep out interference and the overall level of hum and noise is 100dB below the clipping level. With the LF equaliser switched out (no roll-off), the system is still protected by a subsonic filter that introduces a 12dB/octave slope below 27Hz.

I set up the VS2108s in my studio, supporting them on the Auralex Mopads that I normally use for my own monitors. All rear panel filters were set in their flat position. The weight of these speakers makes them a hefty lift for one person, especially if you need to lean over to place them correctly. Once in place, though, they certainly aren't going anywhere — producers planning to use these as mobile speakers might consider getting some flight cases with wheels, or maybe even a roadie! Being wider than most of the nearfield speakers I've tried, they only just fitted onto the monitor shelf of my Quicklock studio desk with a pair of Apple 20-inch monitor screens between them, but the listening tests proved extremely revealing.

Quested monitors typically come across as smooth but punchy, with an ability to spotlight detail in a non-abrasive way. They also tend to exhibit extraordinarily good stereo imaging and happily the VS2108s embody all these attributes. What I really liked about them though was that they didn't cover up poor or unusual mixes — every nuance is exposed. For example, I listened to the original Peter Green version of Black Magic Woman, which is a great track, but you could really hear the room in which the drums were recorded and the guitar distortion on the rhythm track was laid bare in a way I hadn't experienced before. The whole thing had a very obvious 'recorded in a small studio while playing live' vibe about it which, while being very much 'of the time', probably wouldn't be done the same way today. I soon found I was listening to my record collection in a much more analytical way, with the sonic differences between artists and producers seeming far more obvious than I was used to hearing.

There was also a good sense of deep bass with these monitors, but without the bass being hyped or overblown. So, unless you have a very large studio or are setting up a big surround system, I can't imagine a sub being considered a necessity. I don't think I've ever heard better stereo imaging, which often reveals amusing pan settings on some early pop records, and though transient details comes across clearly, it isn't over-emphasised, as it is with many metal domed tweeters. When a mix sounds good on these speakers you can be confident it is good. By the same token, if it sounds a bit on the rough side, then there are almost certainly improvements to be made.

As a home studio monitor, the VS2108s are at the higher end of the price range, but as professional monitors capable of functioning as main monitors in a medium sized professional facility, they are actually very attractively priced, given their performance. Similarly, they are ideal as a producer's personal reference speaker as they paint a far more accurate picture than the majority of smaller nearfield monitors and can be used to look into a mix with almost forensic accuracy. Whether they are right for you depends on your budget and on the room you plan to work in. Any monitor needs to be used in an acoustically treated room to give of its best, and with a speaker of this quality, it would be false economy to put it in a typical bedroom studio and expect professional quality monitoring without applying at least basic acoustic treatment. Having said that, even simple two-inch acoustic foam at the 'mirror points' achieves acceptable results in most domestic rooms so don't feel these are for serious, pro-grade studios only.

I have to say that these are amongst the very best monitors I've tried in my own studio, which is typical of many project studios in terms of size and acoustic treatment. I love the way the VS2108s don't cover up bad mixes with flattery, and when you get the mix right, the sound is glorious. What all this proves is that an honest engineering approach to monitor design really pays off, and although there are many cheaper alternatives, I'd be hard pushed to suggest one that does the job as well.

If you are considering buying new monitors in this range, you might also consider auditioning the ADAM S3A, Genelec 1031A, ATC SCM20A and Klein + Hummel O-series 200 models.

For studio monitors with the ability to reveal your mixes as they really are, the VS2108s are hard to beat.

For studio monitors with the ability to reveal your mixes as they really are, the VS2108s are hard to beat.