The original VS2108 design was a real success for Quested — so when they said they'd improved it, we thought we'd better test that claim... 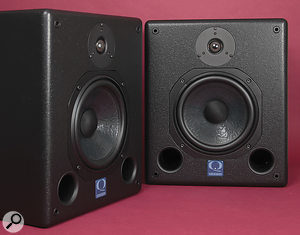 Roger Quested has been building studio monitor speakers for even longer than I've been writing about them, but he still runs a small, independent company that means he can make his own design decisions, rather than having to follow the whims of the finance or marketing departments. Some five years ago we reviewed his VS2108 active monitors, which have now been radically upgraded and re‑engineered, to be relaunched as the V2108 reference monitor. Quested claims that the new model's benefits include improved dynamics delivery and better mid‑range clarity.

The two‑way driver layout remains the same, albeit with a new dust cap and stiffer cone on the eight‑inch driver, but power now comes from the company's new current‑driven, floating drive‑stage, Class A/B amplifier design. There's a 200W amplifier for each driver, which is almost double the power of the earlier version. The amp has been designed for Quested by amp specialists MC2, long‑term collaborators whose premises are just around the corner from Quested (in fact, they used to share premises).

MC2 amps are now used in all Quested active monitor designs, and Roger tells me that he picked the company as development partners after a long search for a suitable amp designer. He says that the new amp design is more reliable, easier to service and of higher quality than that on the V2108's predecessor.

The improvements in the amplifier design, the increased power rating and the changes to the main driver are said to be responsible for the improved mid‑range clarity of the monitors, and the extension of the low-end response down to 40Hz, as compared to the 55Hz of the original VS2108.

Thermal protection is built into the power amps, which are automatically switched to standby mode if they overheat. There's also plenty of heat sinking for normal operation: in addition to the large, rear‑panel, finned heat-sink, there are further metal panel sections, with ventilation slots running around the rear corner edges of the cabinet. A traditional analogue power supply is used for this model, and its operating voltage can be set to either 230V or 115V via internal plugs. 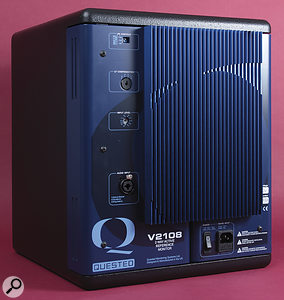 The rear panel includes all of the inputs, outputs and response switching that you'd expect on a professional‑quality studio monitor, as well as the heat sink for the MC2‑designed amplifier.

These speakers are aimed at the smaller professional studio facility, as well as the more discerning end of the project‑studio market, and are a far cry from some of Quested's earlier studio monsters. Although Roger still builds bigger systems for those who need them, demand has shifted towards small‑ to medium‑sized studios. Even so, the V2108 is somewhat larger than most nearfield monitors, so it would probably be more realistic to classify these as midfield monitors, with each one weighing a hefty 23kg and measuring 340 x 400 x 365 mm. The proportions are slightly different from the original VS2108s, but the overall format is still very chunky and squat.

In this design, the eight‑inch bass driver utilises a dual rear‑suspension, and the cone has a long throw — or 'XMax', as the designers like to call it — while the one‑inch, soft‑dome HF driver is ferrofluid‑damped and has a wide dispersion characteristic to help generate a wider sweet spot. Dual bass ports are located at the bottom of the front baffle, and both drivers are flush-set into machined rebates in the 22mm‑thick baffle. Other than the blue Quested logo and its blue power LED, which flashes red to warn of impending clipping or overheating, the boxes are outwardly very conventional, with rounded corners and a textured black‑paint finish. There are no waveguides or other adornments.

Crossover slopes of 24dB/octave at a crossover frequency of 1.4kHz are employed to minimise overlap in the crossover region, and the tonal output balance can be tweaked using an HF Trim DIP switch (which can be set to flat or ±1dB) and a rotary LF trim to accommodate room positioning (‑9, ‑3, flat or +1dB). The ‑9dB setting on the latter is for use with a separate subwoofer. With the LF equaliser switched out (ie. flat, with no roll‑off), the system is still protected by a subsonic filter. A 10‑position, recessed rotary switch adjusts the input sensitivity setting in 2dB steps from +7 to ‑11dB. (The benefit of a stepped switch like this over a continuous control is that it ensures accurate matching of the sensitivity of the two monitors.) Connection is via a balanced combi jack/XLR socket with RF filtering, and the overall level of hum and noise is more than ‑100dB below the clipping level.

These speakers can generate a maximum SPL of 112dB at one metre, and they are flat within ±2dB from 40Hz to 20kHz, which means they offer full‑range operation without the need for a subwoofer, though one may, of course be added for a larger studio installation, or as part of a 5.1 system. Roger tells me that when designing these speakers, he also had in mind the needs of those producers who like to take their own reference monitors with them to wherever they're working.

As usual, I conducted my initial listening tests with the speaker controls set to flat, using some familiar commercial recordings as a source. I have to admit that I was expecting a lot from these speakers, because I had been very impressed by the original VS2108s, and these new models are specified to be even better, with a few dBs of extra SPL capability and an extra 15Hz of bass extension.

Quested monitors always sound the way I feel a studio monitor should do — and my tests confirmed that this new version is, indeed, even more impressive than the older model. Nonetheless, they still retain the same family sound. They're revealing, they deliver an un‑hyped low‑end punch, and they sound smooth enough that you can work with them for long periods without becoming fatigued.

Good mixes sounded great, and bad ones were easily shown up for what they were — which is exactly as it should be from a studio monitor. I listened to David Gilmour's On An Island album, where everything sounded silky and pristine, then went to the opposite extreme to listen to some archive Alex Harvey Band material from his early BBC sessions. The live and somewhat raw nature of the recording came across very clearly, but it still sounded very real!

There was a nice impression of being able to hear into the mix in a more three‑dimensional way than in the older design: any room ambience, wanted or otherwise, was shown up very clearly. (You'll need a listening room with the benefit of adequate acoustic treatment to notice this!)

In a medium‑sized room, there was a wonderfully complete sense of deep bass with these speakers; lesser monitors tend to sound flabby at the low end because of lack of clean power, or because the cabinet is over‑tuned to increase the impression of bass in the kick-drum range. A subwoofer certainly won't be a necessity for most users of the V2108 — in fact, so good is the bass extension of these speakers that they're likely to show up acoustic imperfections in smaller studio spaces. Nevertheless, I'm told a suitable subwoofer design that will complement the 2108 is just around the corner.

If I had to sum up the improvements that have been made over the original VS2108s, I'd have to say that these new speakers have a similar character, but sound just that little bit cleaner in the mid-frequency range, they have a better bass response, and you can squeeze more level out of them.

The Quested V2108s, then, are an impressive pair of studio monitors, but whether they represent the right choice for you will depend both on your budget and the studio space you have available. Their impressive bass extension rules out using them in a very small room, and to get the best out of them, you'll need at least basic 'mirror point' acoustic treatment in the room, as we've explored in many a Studio SOS article in these pages — because otherwise the potentially excellent stereo imaging will be blurred by wall reflections. My own studio is around 3.3 x 5 metres and has simple acoustic treatment as described above, and the V2108s behaved perfectly well in that environment. They also have enough power in hand to stand up well in much larger rooms.

Given the price and the market these speakers are aimed at, the world isn't short of quality alternatives! I'd recommend auditioning the likes of Event's Opals, Genelec's 1031A and ATC's SCM20A, which are obvious quality alternatives for high‑end monitoring, but also consider models by PMC, Klein + Hummel and Focal.