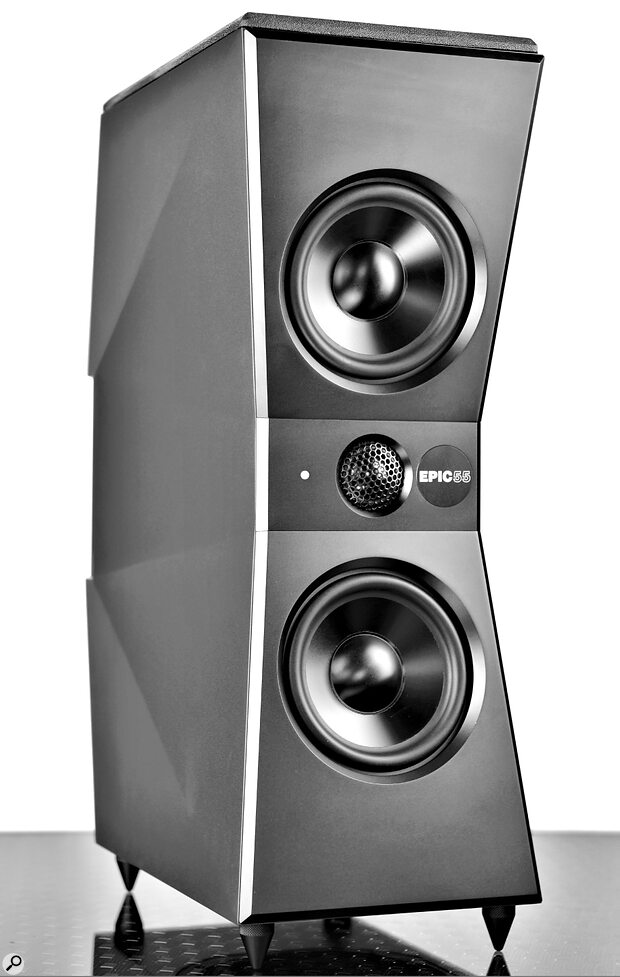 There’s more to ReProducer’s flagship speaker than its unusual looks!

German monitor brand ReProducer Audio Labs made their debut with the compact Epic 5 active monitor around two years ago, and we reviewed it back in SOS February 2021 (https://sosm.ag/epic-5). To save you the bother of sorting through your back issues, I described it as “a classy little monitor that handles extremely well the design compromises inherent to small speakers, while at the same time offering a new option in the compact nearfield category”. So, yes, the Epic 5 acquitted itself very well. The question now is: can ReProducer pull off a similar success with the significantly more ambitious midfield Epic 55?

Even though the Epic 55 is rather larger than the Epic 5, ReProducer Audio Labs haven’t dialled back the innovative and distinctive industrial take on enclosure design that was such an intriguing and attractive feature of the Epic 5. If anything, the Epic 55 is yet more dramatic, with an aesthetic that, to my eyes, looks part Tim Burton‑era Batman and part stealth fighter. The appearance is genuinely striking and it received nothing but praise from those who happened to clap eyes on it while the monitors were in my possession. The constructional materials of the Epic 55 are similar to those employed on the Epic 5 and just as impressive: precision CNC‑machined aluminium plates create the angular front panels, while the multi‑faceted enclosure is constructed from MDF panels and finished in a finely textured dark‑grey paint. The Epic 55, and Epic 5 before it, go to prove that it is still perfectly possible to develop and successfully manufacture monitors that don’t conform to the rectilinear box norms. All you need is creativity, intent, and an enclosure manufacturer willing to work outside the box (see what I did there?). 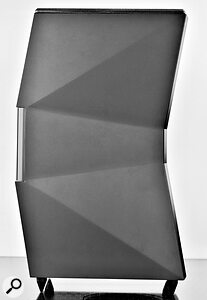 The Epic 55 in profile. Note the lack of parallel surfaces.In addition to being great to look at, the architecture of the Epic 55 makes pretty good electro‑acoustic sense. Firstly, the multi‑faceted enclosure shape creates a multitude of non‑perpendicular angles and non‑parallel internal surfaces, which ought to help suppress internal resonance. This is especially useful on a reflex‑loaded speaker like the Epic 55, because any need to fully fill the internal volume with wadding to damp internal resonance would probably also lower the Q of the reflex resonance to the point where its fundamental worth becomes questionable.

Secondly, the Epic 55 is a D’Appolito system, in which two bass/midrange drivers (one either side of the tweeter) work in parallel right up to the crossover frequency. A fundamental characteristic of D’Appolito systems is that their (portrait orientation) vertical dispersion narrows significantly through the midrange as the spacing between the bass/mid drivers results in off‑axis acoustic path length differences and consequently destructive interference. Line‑source PA speakers control vertical dispersion through exploiting the same phenomenon. There’s a school of thought that says such dispersion narrowing can be of benefit in monitoring applications because it tends to reduce ceiling and desk reflections (or, if the monitor is mounted in landscape format, side wall reflections) in the frequency band where the ear is at its most sensitive. However, the architecture of the Epic 55 takes the dispersion narrowing effect a little further, because its two bass/mid drivers are angled inwards by a few degrees. I’ll present some FuzzMeasure frequency response data a little later in the review to illustrate the narrow vertical dispersion of the Epic 55.

I’m getting a little ahead of myself. however, because there’s some more general description that I’ve not yet covered. Rather than arriving in a simple cardboard carton with crumbling polystyrene corners, the Epic 55s are shipped in individual flightcase‑style boxes, which, while perhaps not ‘tourworthy’, are undoubtedly a big step up from the usual packaging arrangement. Within the flightcases are tightly cut foam inners that hold the monitors securely in place (and actually make it quite difficult to get them out of the box). The foam inners also incorporate compartments for the screw‑in conical metal feet and optional decoupling pad accessories. But why, I hear you ask, does the Epic 55 need feet? It does so because it is reflex loaded by a couple of auxiliary bass radiators, ABRs for short, and these are located in its bottom and top panels,. So the feet, and the 30mm of clearance they provide, are necessary because if an Epic 55 is mounted in portrait orientation, the bottom radiator requires some space to do its thing. 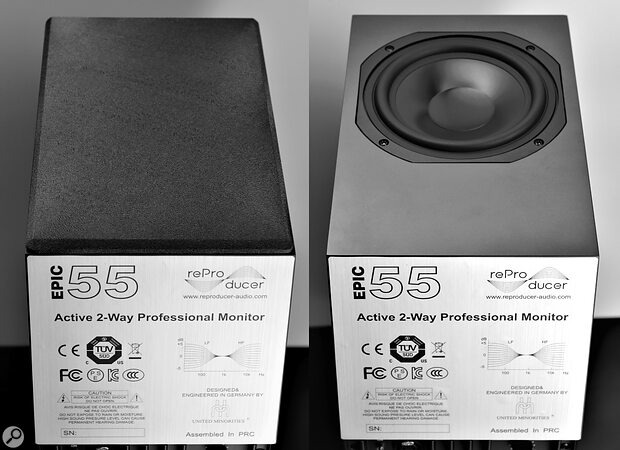 ABRs perform the same function as the much more common reflex port, in that they add a tuned resonance to extend the low‑frequency bandwidth of a monitor, but they also bring a few potential advantages. Firstly, if the magnet‑less driver employed for an ABR is appropriately engineered and able to provide generous linear diaphragm movement, it should offer better linearity to higher volume levels than a reflex port. As a result, ABRs don’t suffer the ‘chuffing’ noises or the more subtle compression effects to which ports can be prone. Secondly, the lower limit of port tuning frequency is often dictated by the interrelated constraints of the length of port that will fit in the enclosure, and the diameter of the port that will allow high airflow volume before the onset of turbulence. Lowering ABR tuning frequency, on the other hand, is simply a matter of adding a little more moving mass to the diaphragm. And lastly, ABRs fundamentally don’t suffer organ pipe resonance, and they potentially reduce the leakage of midrange energy from inside the enclosure. So why are ABRs not much more common? Well, they’re physically more complicated...