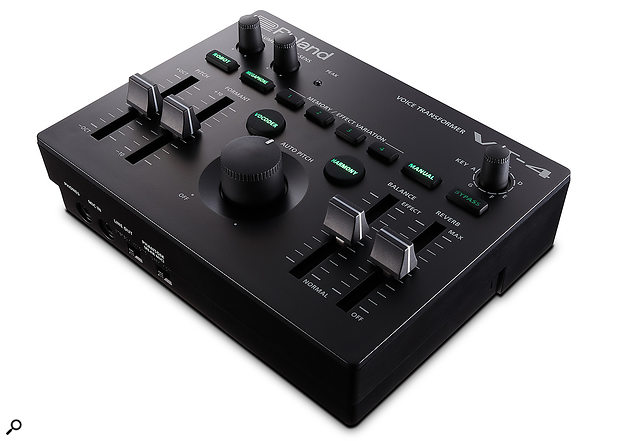 From the classic vocoders of the '70s through to the hyper pitch-corrected pop vocals of the last decade, Roland's VT‑4 can do it all.

The VT‑4 is the latest version of Roland's popular Vocal Transformer line, designed to give you all manner of popular vocal effects in a handy and inexpensive desktop box. The original VT-1 was a Boss product first released in the later half of the 1990s. The last version, the VT‑3, was reviewed in Sound On Sound in May 2014 by Paul Nagle. Back then, Paul praised the VT‑3 for its versatility, but noted that the pitch correction had reliability issues. Let's see what the latest incarnation has to offer.

The VT‑4 is a similar format to its predecessor. At 174 x 133 x 58mm, it's slightly smaller, but maintains the four faders for principal controls, plus the large knob in the middle. The green livery of the Aria range is present, but much more subtly than in the VT‑3, being confined to the LED‑backlit buttons.

On the VT‑4's back panel we find a power switch, a USB port, a MIDI input, a 'combi' jack/XLR socket and a pair of quarter-inch audio outputs.There's no traditional power supply socket; power comes via the USB 2 port or via four AA batteries if portability is required. The USB port also allows the VT‑4 to be used as a USB audio interface — not class‑compliant, sadly; drivers are required. Around the back is a 'combi' XLR/TRS input with optional phantom power for your microphone, and a stereo pair of line outputs. There's also a MIDI input port, more on that shortly.

On the front of the unit we find a 3.5mm headphone output and another microphone input. This input is to be used with more inexpensive plug‑in‑power compatible microphones. You'll also find switches for mono/stereo output and a phantom power switch for the rear XLR input.

Around the front is a 3.5mm headphone socket, a 3.5mm mic input socket, a switch to select mono or stereo line out, and another switch to turn the XLR input's phantom power on or off.Simplicity has always been a key factor with the Vocal Transformers and the VT‑4 is no exception. Plug in a microphone, adjust the mic sensitivity control and off you go. There are four sliders on the front panel, which always have an immediate effect. The Balance fader is your wet/dry control, mixing the processed voice with your natural voice. The Reverb fader applies a simple reverb or delay effect, chosen from eight different presets. These effects aren't really the VT‑4's raison d'être, but they do add a little icing to the cake.

The other two faders on the front panel are the Pitch and Formant controls. These are fundamental to the Vocal Transformer and work in all modes. Pitch transposes your voice, up to an octave either way. Formant adjusts formant filters to achieve gender-bending results. With these two controls, one can summon anything from Sauron himself to Alvin the chipmunk on helium, and everything in-between.

In the middle of the VT‑4 is a big knob labelled Auto Pitch. It can be used in any mode to apply automatic pitch correction to your voice. Fully counter-clockwise, there is no pitch correction. As you move the control clockwise the pitch correction becomes more pronounced until, when fully clockwise, your voice becomes hard-quantised — an effect beloved of saccharine pop music. You can choose to correct your voice to any major or minor scale using the Key knob. You can select any of the 12 notes in a chromatic scale and that will give you the major scale in that key. If you want a minor scale, you simply turn the knob three clicks to the right, which will be the relative minor scale. Other scale types are not possible.

In his review of the VT‑3, Paul found that the pitch tracking left something to be desired. I'm happy to report that the VT‑4 did an exemplary job of tracking and correcting my voice. There were no odd glitches or obvious tracking problems.

Having dialled in the perfect amount of pitch correction, you might want to hit that Harmony button to add sympathetic harmonies to your voice. You can choose from up to eight harmony presets using the Effect Variation buttons (with a modifier to select presets 5-8). They cover the most common vocal harmony intervals with up to three voices, but sadly there's no way to create custom harmonies (or is there? see the 'SysEx' box).

With Robot mode engaged, your voice is stripped of any expression and the pitch remains utterly constant at a note set by the Key control. The Pitch and Formant sliders will still do their thing. Once again, you can select from one of eight different Robot variations using the Effect Variation buttons. They tend to simply change the base octave, but there are a couple of variations that utilise feedback to create a sort of '70s sci-fi comb-filter robot sound, which I was rather fond of.

The next effect is the Vocoder mode, which when engaged will vocode your pitch‑corrected, robotized vocal using an internal carrier signal at the pitch set by the Key and Pitch controls. Again eight different flavours of vocoder are available, accessed via the Effect Variation buttons. These cover a range of styles such as classic Cylon vocoding, Stephen Hawking speech synthesis, Talk Boxes, and there's even a lo-fi Speak & Spell-inspired preset. They're all great fun.

Here is where that MIDI input comes in handy. With a MIDI controller connected, you can control the Robot or Vocoder carrier pitch using MIDI notes. And if you press the Harmony button, you can play up to four voices. It works beautifully and really opens up the possibilities of both Robot and Vocoder modes.

The last effect you can apply on top of everything previously mentioned is the Megaphone. This supplies you with a selection of distortion or modulation type effects different to the Reverb effects applied later in the chain. Like the other mode switches, the Megaphone has eight variations which go beyond a simple megaphone into effects like FM radio, choruses and vibrato. Again, these effects are basic and there are no parameters to tweak (at least from the front panel — see 'SysEx' box again), they're either on or off. Nonetheless, they provide some fun extra character.

In order to help you get the perfect sound, there's a low-pass filter and noise gate that can be applied to the incoming signal. There's also an enhancer effect which can be enabled on the processed signal. Controls are limited to using a combination of keys and the four Effect Variation buttons to choose one of four strengths for each element. It might seem limited, but it's usually enough to sort out any problems with unwanted noise, mic rumbles etc.

Once you've crafted the perfect hell-demon, '70s robot or perfectly pitched pop harmony, you're going to want to save a preset. Roland call them 'scene memories'. There are just eight slots to save in, two banks of four. Saving is as simple as pressing one of the four memory buttons (plus a modifier for slots 5-8) for a few seconds. Eight slots might not seem overly generous, but given the simplicity of the VT‑4, it doesn't seem like a troublesome limitation.

The VT‑4 can also double up as an audio interface. Connect a USB 2 cable to your computer and install the drivers from Roland's website and you're away. The audio interface opens up some interesting options. Audio played back from the computer can be routed straight to the VT‑4's outputs, but also to the mic input and the Vocoder carrier input. The VT‑4 sends audio back to the computer in one of three stereo streams: mixed, wet or dry.

This means you can, for example, pitch‑correct pre-recorded vocals without leaving the digital domain, straight in and out of the DAW. Not only that, it gives you the option to use your own carrier signal in the vocoder, which is not possible any other way and turns the VT‑4 into a fully fledged vocoder. Record your vocals dry in the DAW and send them to the mic input whilst you send a pad or synth bass line to the carrier input. Dial in just the right sound and record both the wet and dry signals simultaneously back to your DAW for further processing.

The VT‑4 is way more fun than it has any right to be. The pitch correction was, in my experience, fast and accurate. The Robot and Vocoder modes are hellishly good fun and the other effects combine to make a well thought-out vocal processor. The ability to use MIDI for pitch or supply your own vocoder carrier via the USB 2 interface actually qualifies the VT‑4 as a vocoder, and eight variations of every effect mean you'll be finding new combinations for a long time.

The Vocal Transformer line of products started out as a simple effect, but has matured into a flexible and impressive vocal toolbox. It could be used for everything from subtle pitch correction, harmonising and vocoding to Hollywood sound design of demons, fairy-folk or spy-thriller vocal disguises. Quite simply, I imagine anyone who records vocals will find a use for it.

There may be nothing with the unique combination of effects the VT‑4 offers, but there is a fair bit of competition in the pitch‑correction and vocoder markets. For a dedicated vocoder, Roland's own VP-03 is worth a look (reviewed by Gordon Reid in July 2017). For a similar suite of effects in a guitar pedal, the Electro‑Harmonix Voice Box offers harmonising and vocoding plus a few other tricks, but without pitch correction. Finally, the TC‑Helicon VoiceTone Harmony-G XT (reviewed by Paul White in SOS August 2011) offers harmonising and effects but no vocoder.

If you're thinking of upgrading from the VT‑3, here's a run down of the main changes. Improvements include:

VT‑3 features which didn't make it to the VT‑4 are the Synth modes, which play synth sounds with your voice, and the foot-pedal input, which was used for hands-free bypass. Roland's Scatter effect, ubiquitous on the Aria line of instruments, also didn't make the grade.

Looking through the MIDI Implementation manual available on Roland's website, it seems there are quite a few parameters exposed via SysEx that are not accessible any other way. For example, it appears possible to edit your own harmonies by choosing different intervals for each harmony voice. It also appears possible to change the gender of each harmony voice. Further investigation revealed SysEx control over reverb, megaphone, equaliser and vocoder parameters which don't exist anywhere else.

Sadly, I didn't get time to try these out, but intrepid Internet explorers are always one step ahead, and it seems that these SysEx parameters do indeed work. My guess is it won't be long before some enterprising soul makes an editor that exposes all this. Most interesting!

Over the years, Roland's Vocal Transformer line has ripened into a solid box of tricks. Whether you just need gentle pitch correction or want to turn yourself into a robot barbershop quartet, the VT‑4 has you covered.