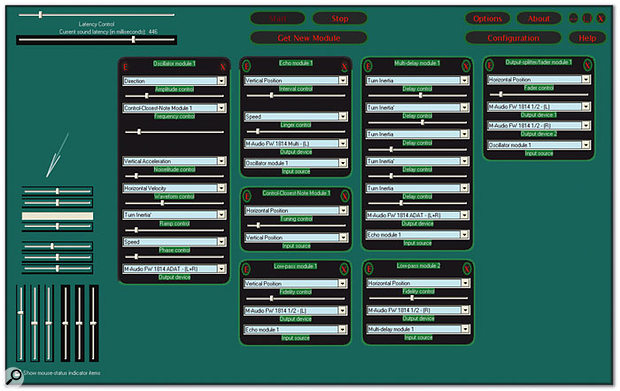 When it comes to hands-on control, we're used to being told that the mouse is a poor substitute for knobs and faders. This unique soft synth might just change all that...

Every manufacturer loves to describe their products as 'revolutionary' and 'innovative', but all too often, that turns out to mean that they're a different colour from the competition. So I was a little suspicious at first of Rollosonic 's 'mouse driven' interface. After all, aren't all computer programs driven from the mouse? Well, they are, but not in the same way as Rollosonic is; and I think it is fair to say that terms such as 'revolutionary' really do apply to the user interface on offer here.

Rollosonic is a modular synth, but it's not like any other modular synth I'm aware of. Its unique feature is the ability to convert mouse movements into all manner of different control signals: at any one point in time, Rollosonic measures not only the position of the mouse, but also its horizontal and vertical velocity, acceleration, direction and 'turn inertia'. And although you can connect up a MIDI keyboard, it's these mouse-based control signals that are at the heart of Rollosonic 's synthesis capabilities.

There's a modest total of 29 modules in the Rollosonic palette, which are accessed by clicking on the Get New Module button. There are no virtual patch cords or fancy graphics: each module simply consists of a number of pop-up menus, most with accompanying Sensitivity sliders, allowing you to specify input and output paths and control sources for the various parameters. You can't resize modules, and wherever you drop them with the mouse, they stay put, even if that means they overlap or cover other bits of the Rollosonic interface. You do at least get to decide what colour everything is, if you want.

As in most modular synths, some modules deal only with control signals, while others can generate or process audio. And most of the audio-based modules are familiar, at least in name. There's a single Oscillator module, a short list of processing modules that includes Echo, Distortion, Multi-delay, Pitch-shift and the intriguingly named Ding Dong, and a couple of utility modules that let Rollosonic accept an external audio input and write its own output to disk. These are necessary, because Rollosonic only works as a stand-alone application, and can't be used as a plug-in or via Rewire.

The control modules are unlike anything you'll find in a typical synth. There are no LFOs or envelopes, and you can't even get access to MIDI Controller data; the MIDI Input module seems to supply Note On and Pitch information, and nothing else. Instead, the control modules are designed to process the various measurements of mouse movement and position in intriguing and sometimes baffling ways. Some have basic functions that are pretty obvious, such as limiting the range of a control signal or combining it with another one, while the Control Closest Note module is a handy way of converting a mouse-based value to a note pitch.

Other control modules are more obscure. The Control Modulator module takes a control signal and modulates either its amplitude or its frequency, according to various parameters which can, in turn, be assigned to other controls. This allows you to generate something like an LFO, but also all manner of weird and wonderful control signals in the audio range. There's also a Control Sequence module, which allows you to type in a sequence of notes as a text string, such as 'C#3A3E2C#2', and use the mouse-based controls to modify note length and so on.

That might not sound like the friendliest way of getting note sequences into Rollosonic, but after a couple of minutes of playing with the program, you quickly realise that note sequences are not really central to what this synth does. You'll never get anything approaching emulation of an acoustic instrument out of this, and nor can it replace a conventional analogue synth. Your chances of creating a pounding dance bass line or a sync lead with Rollosonic are, to put it bluntly, nil. So what's the point in it?

Movement is the key both to Rollosonic 's interface, and to the way it sounds, so you'd expect it to take advantage of stereo and surround output. However, in the first version of Rollosonic I tried, there didn't seem to be any modules offering a conventional means of panning the audio output, so the idea of using the mouse to move the sound around the speakers seemed to be a non-starter. After a while, however, I realised that it's perfectly possible to create multiple-speaker mayhem without a panner, because every module that produces audio allows you to choose any mono or stereo output available in your system, so you can simply have multiple modules connected to different outputs. The later version 1.0b remedied the omission; it added a number of new modules, one of which is an Output Splitter that allows you to use the mouse to divide an input signal and send it to two separate outputs.

Whether you see any point in Rollosonic at all is likely to depend on how fond you are of gigantic, squalling waves of noise, because that's what 99 percent of Rollosonic Configurations produce. If, like me, you are very fond of that sort of thing, Rollosonic will have a unique appeal, because it gives you so many ways to create really screwed-up noises and then screw with them some more. Even the simplest configurations almost come alive when you move the mouse, veering wildly from sinister hummings and burblings to great sheets of blistering white noise. What seems dismayingly random at first glance begins to make sense quite soon, as you get used to the idea that the mouse is an instrument like any other, with its own playing technique. Add the Echo and Delay modules into the mix and you can create endless, ever-changing textures with a couple of hand movements. It's hard to see why they felt the need to add a Distortion module.

You can introduce pitched elements into the mix, either by converting mouse movements to note pitches or playing the Oscillator module from a keyboard. It's even possible to hold down sustained notes on the keyboard and use the mouse to create complex and subtle tonal changes; you can generate some ghostly and atmospheric pad-type sounds this way, though you do have to exercise quite a lot of self-restraint! In the first version of Rollosonic I tried, unwanted zipper noise was a big problem with this sort of patch, but towards the end of the review period I downloaded a new version 1.0b, which made a major improvement in this respect. Increasing the latency setting also helps, and unlike most keyboard-based synths, Rollosonic is fun to play even at high latency settings. It would be interesting to try it out with other pointing devices such as trackballs, too.

There are some areas where Rollosonic still feels a little raw. In general, I didn't mind the rather basic user interface — it might not look very slick, but it's clear enough and it works — but the lack of any output metering or clip indication is a problem in a synth that really can go from a whisper to a roar in no time. It would be lovely to be able to use Rollosonic as a plug-in, too, though I'm not sure if any of the existing plug-in standards would make this kind of mouse-based control possible.

In terms of functionality, meanwhile, I would like to see Rollosonic bring back a few of the more traditional synthesis elements. This would be a more musical synth if you could apply envelopes to the sound, for example, and although version 1.0b addressed one of its shortcomings by adding Low-pass and High-pass Filter modules, they don't seem to offer mouse control over cutoff and resonance. A more sophisticated mouse-controlled filter would be great for processing external audio, as well as helping to tame some of the more extreme noise that emerges. Finally, there are only a few example presets, and it would be nice to have a decent library that shows what is possible with this synth.

However, Rollosonic is a young product which is being updated on a very regular basis, and I'm sure the developers have all sorts of improvements in mind for future versions. It's already very much worth investigating if noise is your thing, and has the potential to grow into something really special. Above all, Rollosonic demonstrates that with a little imagination, developers can turn the much-maligned mouse into a uniquely rich creative tool for sound generation.

Rollosonic's innovative approach to mouse control has the potential to make it an essential part of the sound designer's armoury.