This is the one Vienna fans have been waiting for. Though the string sections in VSL's Pro Edition library and Orchestral Strings I & II Vienna Instruments are beautifully played, exquisitely sampled and turn in a broader range of performances than Peter Sellers in his heyday, they have been said to lack the requisite lush, romantic 'instant Hollywood' sound. VSL have addressed this by recording Appassionata Strings (AS), an 18GB (12GB when installed) set of large string ensembles designed to provide a more overtly emotional, wide-screen listening experience — less European art film, more Titanic. 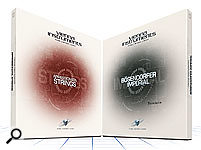 A substantial chunk of this title's 20-player violin section's samples was made available last year, as a free bonus to registered owners of VSL's existing strings. The 20 fiddlers are now joined by 14 violas, 12 cellos and 10 double basses. Having been scaled up from the Pro Edition 's 14/10/8/6 format, the new sections make a correspondingly bigger sound, and approximate the number of strings used in a full-scale orchestra. As with all VSL projects, the recordings were made in the relatively dry acoustic of the company's Silent Stage — if you want a concert hall sound, add your own reverb!

All four of the AS string sections have a full, beautiful, sheer sound. Unsurprisingly, the new violins sound more lush than VSL's original 14-piece section and, as the name suggests, they play with a stronger, more impassioned vibrato, which is emotional and engaging without sounding mawkish. The 'progressive vibrato' delivery is very nice, adding timbral and dynamic mobility and making this attractive section sound even more expressive.

The 12 cellos' tremolos and pfp samples are gorgeous, and their monophonic performance legatos (interval-specific sample sets optimised for the creation of smooth melody lines) are toe-curlingly good. The violas sound equally sumptuous, their rich sound and wide range making them an inspirational patch for composition. If compared to the double basses in Orchestral Strings II, the AS bass section wins out in all areas except the pizzicatos, where they sound somewhat less punchy. The AS basses' menu of styles is relatively limited and, unusually for VSL, no performance legatos are provided for them.

One nice touch is that the violins, violas and cellos performance legatos contain sinuous Bollywood-style slides, which can be instantly accessed with a keyswitch. I also liked the three-note chromatic 'grace runs' — good Tom & Jerry comedy fodder. Samples are provided which start off out of tune then gradually drift into pitch; the idea (instigated in Vienna's Brass I) is good, but for me the musical effect falls between two stools — the initial skewed intonation rules out conventional usage, but the detuning is arguably too subtle for use in horror scores. AS 's creepy atonal cluster chords and chaotic 'random pizzicato' samples are a better bet for that sort of work.

Getting a romantic Hollywood sound is easy with these samples, but more aggressive deliveries are few and far between. 'Harsh' performance samples are the only truly gutsy-sounding articulation here, but only the violins play them. To help busy composers, VSL have lashed together the four sections into ready-to-play 'full strings' programs, in a handful of basic styles. The Vienna Instrument doesn't permit users to create their own keymaps, so if you want to build more of these multi-section ensembles you'll have to find a workaround using your sequencer or VST host.

Choosing between AS and Orchestral Strings I & II (reviewed in SOS in November 2006) is a tough call; AS 's lusher sound is an obvious winner, but the latter's far greater number of articulations (which include 'fast attack' trimmed sustains, flautando, played trills, snap pizzicato, harmonics, sul ponticello, con sordino, col legno, grace notes, glissandi, scale runs and so on) is indispensable for detailed string arrangements. Buying all three collections would be hard on the pocket, but the prospect of the luxurious combinations they can produce is mouth-watering.

Need a piano to go with your orchestra? Then you should definitely check out VSL's new Bösendorfer Imperial Vienna Instrument, which weighs in at a hefty 36.7GB (installed size). The instrument (a Bösendorfer 290 nine-foot grand) has 97 keys and spans eight octaves. To be honest, it's hard to discern the pitch of the sub-bass notes below A0, but they certainly make an exciting, thunderous rumble!

This piano is characterised by an open, clean and stately sound and a very clear attack which is discernible at all dynamics — even the quietest notes speak clearly and distinctly. This clarity would be a great asset when playing the precise mathematical inventions of JS Bach, negotiating the dense note-blizzards of a Rachmaninov piano concerto, or for making sure the instrument stays audible in a full orchestral score, but it might be a handicap when it comes to the more ambiguous, lyrical and intimate sonorities required for solo piano jazz improvisation. Either way, I was impressed with the way the samples respond smoothly and naturally to the touch, with no obvious jumps between the seven dynamic layers.

VSL have dealt with the notoriously difficult problem of replicating the effect of the sustain pedal by sampling a full set of 'pedal down' samples at seven dynamics. Since you can use any controller to switch between articulations, it's easy to set up a patch in which pressing the sustain pedal accesses the pedalled samples, but unlike on a real piano, you won't hear the effect until you play the next note. If you prefer a softer, less focused piano sound, a more distant miking with less obvious stereo imaging is also provided.

The precise, formal sound of this superior instrument lends itself to orchestral arrangements, and the identical recording conditions guarantee that it will blend well with VSL's other instruments. Committed Vienna collectors will buy this without hearing it, but piano sound being such a personal thing, I'd strongly advise checking out the demos on VSL's site before you buy. Dave Stewart

Loopmasters are certainly productive when it comes to their Origin Series: title 20 in the collection is Urban Soul. As with many of the earlier titles, it is dominated by loops, but it also features some of the key drum and instrument sounds configured for a number of popular software sampler formats. In total, there is 650MB of sample content, and an audio CD is also included.

The material is divided into a number of categories. Loops are provided for bass (separate electric and synth-based loops), drums, guitar, percussion, turntable scratches and a catch-all of 'musical loops'. The original recording tempos are generally in the 80-100 bpm range, giving the whole collection a nice down-tempo feel. Given the R&B/soul/hip-hop flavour, the drum (about 90 loops) and bass (100 loops) material is key and, in this regard, Urban Soul hits the target. There are some interesting drum loops featuring both classic and contemporary drum sounds. The electric bass loops are generally pretty mellow, but can also be quite complex harmonically, with a jazz edge. The synth-bass loops tend to be a little more aggressive-sounding and there are plenty of cone-flapping bass frequencies to be found amongst these.

The guitar loops are equally mellow and jazz influenced, while the 'musical' loops category includes similar Rhodes, synth and Wurlitzer chord sequences. The 18 'scratch' loops are very usable and the percussion loops are very good, although it's a shame there are not more.

Further folders include a range of one-shot samples of drum hits, vocal/FX and instrument sounds. The vocal and FX samples are a bit of a mixture, from brass hits to vocoder-processed vocal snatches. It's nothing drastically new, but it's nice ear-candy all the same. In addition to the sampler-based instrument sounds, small collections of one-shot chords are included for guitar, Rhodes and Wurlitzer. These cover a range of chord voicings, but are mostly quite exotic (Em9sus4 or Gm9, for example). They are, however, easy to combine with the bass lines. The 30 sampler patches mentioned earlier also add to the flexibility. They include various drum kits, bass, percussion, electric and nylon guitar, harp, marimba and Rhodes, amongst a few others. While these will not compete with a dedicated multisampled, velocity-layered instrument, they are playable and a very useful addition.

In terms of musical style, this is fairly laid-back stuff (think 'What They Do' by The Roots, 'Appletree' by Erykah Badu or 'Not Gon' Cry' by Mary J Blige), though the synth bass lines can give it a harder, hip-hop edge if required. Urban Soul represents good value for money and, while it may not break hugely new musical ground, what it does, it does pretty well. John Walden

Ah, the magic of the panflute! In the '80s you couldn't move without hearing them: usually drenched in reverb and accompanied by an orchestra of crickets and synth strings. Sadly, the instrument had often not been performed by a Peruvian peasant on a windswept Andean mountain, but whipped out on a Korg M1 in a home studio in Farnham. That didn't stop the public buying these CDs in their millions. Whether real or synthetic, this seems to be one of those sounds everybody likes to hear.

The samples in this library were performed by Catalin Tarcolea, a Romanian (I think) musician, who plays with a lot of feeling. This panflute is mapped chromatically in concert pitch over a range of nearly three and a half octaves, from D3 to G6. Recorded in mono, in a pleasant, dry studio, it sounds lovely. The non-vibrato sustains are great for melodies and chord pads, and the vibrato and 'wild vibrato' samples provide useful melodic options. These long notes are unlooped and last around seven seconds. 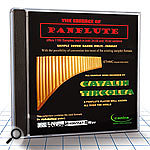 Though no dynamic layering is used, the short notes and staccatos are played more strongly and have a more emphatic attack than the long notes. A comprehensive set of fast and slow grace notes is on hand for melodic decoration, and animated performances such as triple staccatos (which feature ultra-fast repeated grace notes preceding a staccato note) are a great resource for lively rhythmic work.

I often wondered whether a panflute can bend its notes as extensively as the Farnham school would have us believe, and the answer is a qualified 'yes' — the portamento samples slowly glide down a tone in pitch, a very nice but somewhat eerie effect. Other effects include 'special glissando' (a fast sweep up, reminiscent of a slide-whistle) and a set of bird-like calls, tweets and flutings. There are also many licks and phrases ready to insert in your scores: extremely rapid, virtuosic rhythmic passages, mournful, soulfully-played rainforest laments, Eastern European-flavoured melodies, a few classical excerpts and even some blues licks. These performances show what the instrument is capable of in the hands of a good player.

The panflute has been tarnished by deadline-conscious TV composers, who lob it in their soundtracks whenever jungle greenery appears on screen, irrespective of geographical location. It's also been mercilessly lampooned by The Fast Show, but don't let that put you off: the pure, breathy tone of this instrument is an essential timbre in the keyboardist's arsenal. An excellent library, and at this price, an absolute snip. Dave Stewart