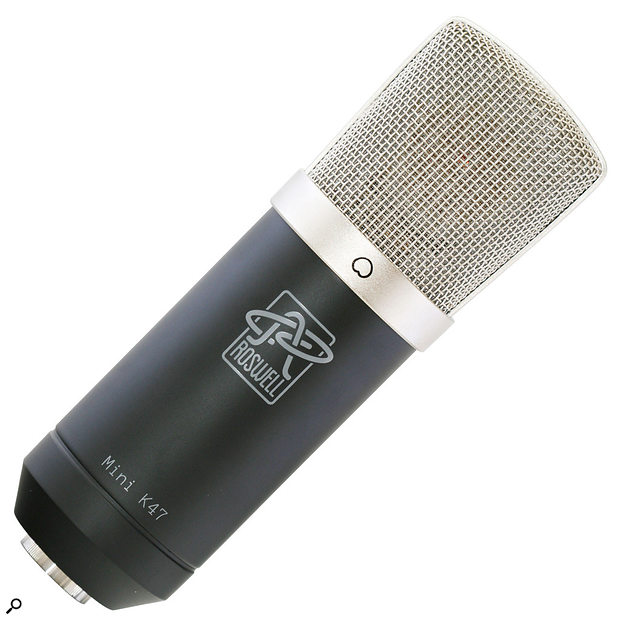 By concentrating only on the components that matter, Roswell have managed to create a classic-sounding mic with a budget price tag.

Californian company Roswell Pro Audio are the sister company to DIY kit providers Microphone Parts, and they embrace a similar design philosophy — except, of course, that you don’t have to build the mics yourself. The key figure in the company is Matthew McGlynn, who probably would not mind being called a microphone obsessive, and who will be familiar to anyone who frequents the Recording Hacks web site.

Most of the parts used in the Mini K47 are of ‘offshore’ origin, but by combining a selected capsule with upgraded electronics, Roswell have managed to coax a surprising level of performance out of what is in reality an almost entry-level-priced microphone. Yes, this particular model starts life in China, but don’t let that put you off, as it is far from being a standard ‘me too’ product. The final mods and testing are all carried out at Roswell’s own factory.

Launched earlier in 2015, the Mini K47 sets out to replicate something of the essence of a certain vintage German capacitor microphone, where the K47 designation refers to the capsule design. However, the circuit design focuses on transparency, so you really get to hear the sound of the capsule. This single-backplate, 34mm-diameter cardioid–pattern capsule (the diaphragm itself is marginally larger than one inch in diameter) appears to be closely modelled on the Neumann original, and is skinned with a three-micron gold-coated mylar diaphragm.

The capsule is followed by low-noise, transformerless circuitry based on the classic Schoeps circuit and built on two glass-fibre circuit boards, where we’re told many of the tricks and tweaks are based on experience Matthew gained through modifying and upgrading mics from other companies. For example, the signal-chain capacitors are from WIMA, the crucial J-FET is a selected low-capacitance K30A type (replacing the more common and higher capacitance 2SK170 for lower noise), and each JFET is individually biased to optimise gain and minimise distortion. The aforementioned testing includes a 24-hour burn-in period, as well as checks for key parameter tolerances such as sensitivity and noise. More crucially, each mic also has to pass a listening test. A QC card bearing the serial number comes with each microphone.

Physically, the mic is a conventional side-address shape, with the Roswell logo indicating the ‘hot’ side of the capsule, but it is around three quarters the size of what you might expect, with a length of just 150mm. The casework itself, which combines a black body finish with a nickel grille, is unashamedly utilitarian but still uses a solid brass shell and gold-plated XLR pins. There are no pad or filter switches.

By way of performance, the mic has a healthy sensitivity of 18mV/Pa and a specified equivalent input noise figure of 13dBA. The specified frequency range of 20Hz to 16kHz may make the mic seem to be lacking high end, but there’s no sign of that when conducting actual tests, just a sense of tonal smoothness. A frequency response plot for the microphone shows a very broad, quite subtle lift peaking probably no more than 3dB at around 5kHz. This starts to rise at around 1kHz, dropping away again by 10kHz or so, which means there’s no dramatic presence peak. Above 16kHz the response drops away slowly but there’s still plenty of useful level up to 20kHz and beyond. Standard 48V phantom power is required for operation.

The price includes a soft storage pouch and a swivel mount, though a shockmount is available as an optional extra. Matched pairs can be ordered, where the sensitivity matches to within 0.5dB and the frequency response to within 1.5dB between 50Hz and 15kHz, for an extra $100£76 on top of the basic price of the two mics (though the higher price does include two shockmounts).

This microphone is recommended for a number of sources, including vocals, but also extending to acoustic and electric guitar, piano, drum overheads and general room-mic applications. Starting with speech, the tonality comes across as fairly natural but with a noticeable low–end lift from the proximity effect that may necessitate a little low-cut EQ if you’re in the habit of miking the voice close-up. This is coupled with a slight sense of brightness but without any annoying peakiness in the upper mid-range, so you hear smooth but still detailed highs. To sum up as concisely as possible, you get a big vocal sound but without any obvious coloration — the flattery is subtle. Moving the mic far enough away to lose the proximity effect reveals a well-balanced sound that still retains plenty of weight. Any recommendation that you choose the K47 as a vocal mic comes with the usual caveat that you need to try a few different mics to see which best suits your voice, though the lack of aggressive presence-region voicing suggests that the mic may cope with a wider range of voice types than some of the more obviously voiced mics out there. 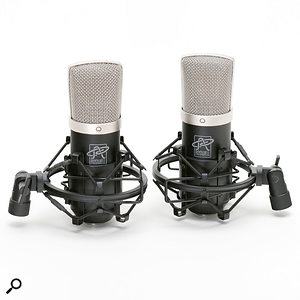 The Mini K47 is available in matched stereo pairs, with which you also get two elastic shockmounts.Acoustic guitar recorded well, too. As an experiment, I set up a gentle EQ dip to counter the natural presence peak of the mic, and found that I got something closer to the way the guitar actually sounded in the room. However, that gentle lift is often welcome in helping sounds cut through in a polite rather than aggressive way, and though many mics have an artificially brightened high end that can sometimes be useful in pop productions, you can easily EQ in a little extra air or ‘zing’ if you need it without losing the natural character.

On electric guitar, the recorded sound was a hint brighter than I heard in the room unless the mic was placed close enough for the proximity effect to kick in, but still very workable, balancing definition with adequate weight and requiring little in the way of EQ. The sound retained plenty of bite but without encouraging high-end fizz.

Set up as an X-Y stereo pair, the mics produced a stable centre image, though they could of course also be used as a spaced pair. The stereo matching tolerance also appears to be all that it is claimed. While I’m sure Roswell Pro Audio wouldn’t claim that you are getting a U47 clone, the mic definitely has tonal leanings in that direction because of the capsule design,while the transparency of the electronics leaves you plenty of flexibility when it comes to mix processing or EQ. A number of boutique manufacturers take the ‘modify a Chinese mic’ route and end up charging a lot more than you’ll pay for a Mini K47, yet you’re getting the benefit of Matthew’s extensive experience and attention to detail, and quality parts fitted in all the critical locations. Definitely a mic for your shortlist.

The list of microphone designs and mic manufacturers that essentially take a Chinese–made capsule and team it with high–quality electronics to optimise performance, as Roswell have done, is growing all the time, and there are simply too many to list them all here.

Roswell have dispensed with unnecessary frills such as included shockmounts and camera cases to deliver a quality microphone at a budget price.