Safe Sound have already impressed us with their Dynamic Toolbox, and now they've brought M/S compression to the Lunchbox format. 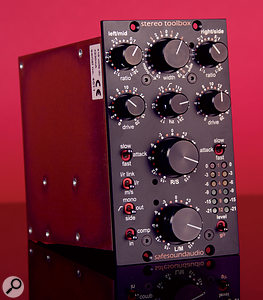 Safe Sound Audio's products are all designed and built in West Yorkshire in the UK. They're a small company, but have quickly developed a reputation for making high-quality outboard gear. After initial success with their P1 mic preamp, we reviewed their Dynamics Toolbox back in SOS October 2008. Safe Sound's latest design is an API 500‑series 'Lunchbox' compressor, the Stereo Toolbox, and the manufacturers proudly state that this is the first Lunchbox module to offer both conventional stereo and mid/sides compression. (If you're in any doubt about what M/S is, Safe Sound's own White Paper on the subject is at www.safesoundaudio.co.uk/downloads/m-s_white_paper.pdf).

Safe Sound's Robert Campbell says that their most recent products bridge the gap between "serious mixdown jobs” and the work of mastering houses. In other words, he's designing processors that are intended for use either on stereo buses during mixdown, or on stereo stems during the mastering stage. The latter might not traditionally have been the domain of the mastering engineer, but Campbell says that stem mastering is becoming increasingly common. One reason for this, he says, is that DAW software allows people to use huge numbers of tracks in a mix, and that consequently, there's often a lot of congestion in the low mids, which can be tackled just as easily by a willing mastering engineer working on stems as by a mix engineer working on a full mix. He might have a point, as he's not the only person to have mentioned this trend to me recently!

In my experience, Lunchbox modules can often feel a little awkward, simply because the front‑panel controls are crowded, and this can make it difficult to operate controls and to read the legends. Safe Sound have opted for a 2U Lunchbox module, so despite the presence of 14 controls, there's plenty of space. The extra slot this takes up is a price worth paying, particularly when you consider that this is a stereo device, and that there are plenty of 2U or 3U 19-inch rackmounting units which offer less by way of control. The build quality is reassuring, as is the weight, which is due in no small part to the inclusion of two Cinemag output transformers.

The controls are laid out in a neat, logical fashion, and the dials are detented to allow precise matching between channels and accurate recall. At the top, there's a central 'width' control, which is flanked on either side by two ratio controls, one for each of the two channels. The ratio goes all the way from 1:1 (off) to 30:1 (limiting). Despite the detents, you're still able to achieve very fine degrees of adjustment. The ratio controls, for example, use eight 'clicks' from 3:1 to 5:1 (inclusive), and the dial action is lovely and smooth, too.

Beneath the width control is a pot to set the frequency of a high‑pass filter, which is sweepable from 17Hz all the way up to 2.1kHz at 12dB per octave. A toggle switch is used to patch this filter in to the mono side‑chain signal or the Sides audio signal, or to switch it off. It's potentially a very useful addition, whether to reduce/avoid the pumping effect that can result from kick drums and bass instruments triggering the compressor, or just to roll off congested muddy frequencies on wide-panned instruments. The latter would make it useful for vinyl mastering, amongst other applications.

The two adjacent controls, mysteriously labelled 'drive', are actually standard threshold controls, but with the legend values running in reverse. In other words, increasing the 'drive' setting (which runs clockwise, from 0-20) lowers the threshold. The threshold range is +13dBu to ‑27dBu. Beneath these drive controls, two more dials — which are slightly larger this time, and stacked one above the other — govern the make‑up gain (±15dB, with 15 clicks from 0 to +12 dB), and thus the level running from each channel of the Stereo Toolbox into its output transformer. The maximum output level (the onset of transformer core saturation), is quoted as +28dBu at 1kHz and above, and +24dBu at 50Hz.

Four toggle switches on the left are surrounded by their own red, plastic grommets, which is a nice practical touch that aids visibility (it's so easy for small switches to become lost in a crowded Lunchbox!). One switch, mirrored on the right‑hand side for the other channel, sets the attack time as 'slow' (10ms) or 'fast' (1ms), and another the compression mode (stereo linked L/R, dual mono, or M/S). Beneath this are the high‑pass filter and compression in/out switches. Finally, at the bottom right, there's a control to set the dual six‑segment LED meters to monitor the input level or the gain reduction.

The technical specifications are published on Safe Sound's web site, so I'll run through only the key points here. The frequency response of the main audio path is quoted as being quarter of a decibel down at 10Hz, and only half a decibel down way beyond the audible spectrum at 70kHz. The electronically balanced line input stage has an input impedance greater than 10kΩ, and can accommodate sources up to +24dBu. Output noise is quoted as ‑90dBu RMS unweighted (measured at 22Hz to 22kHz), and ‑92dBu RMS A‑weighted (again, 22Hz to 22kHz).

Not every parameter has a dedicated control. Notably, the release time is programme‑dependent, and ranges from 50ms to 1.5s. A few settings have no front-panel controls, but can be changed using jumper switches: there's one to adjust whether the output level control works only when the compressor is switched in, or also when switched out, and another that controls the amount of harmonic distortion by changing the drive impedance to the output transformers. A low‑colour mode (output impedance 50Ω) introduces distortion at 0.06 percent up to 500Hz, and less than 0.02 percent at 1kHz and above, whereas the high‑colour mode (the default), with an output impedance of 600Ω, is a more audible 0.2 to 1 percent up to 500Hz, and typically 0.04 percent at 1kHz and above. Finally, there are a couple of recessed pots that are only accessible using a screwdriver. One calibrates the centre position of the stereo width control, and the other allows fine adjustment of the individual channel levels. The user shouldn't need to touch either.

After the trivial matter of slotting the device into an API Lunchbox rack, I patched the Stereo Toolbox in to a pair of DAW inputs and outputs and switched it on. I tested it on a range of material, and used it both to balance stems and to process the main stereo bus, first in conventional L/R stereo mode, and later in M/S. The first thing to report is that in all scenarios it was easy to achieve nice, clean‑sounding compression. I then kicked in the high‑pass filter, and on the drum and master bus this enabled me to achieve the desired balance of dynamics and solidity very easily, without any audible pumping. For these points alone, I'd say this is a lovely unit that's well worth the asking price. But it does so much more...

M/S compression is something I've been experimenting more with lately. I began doing this using plug-in M/S matrices, as a way of 'linking' a pair of mono compressors for use on a stereo signal, and as I've got used to that way of working it has grown on me. I like the separate control it affords over all those important elements that are smack in the middle of the stereo field, and of the more ambient, and often less critical information to left and right. It was thus a pleasant change to have the facility available in a single unit, and all the more so to have the option to switch back to conventional L/R compression. It's just so convenient.

During my test sessions, I found that I almost always ended up using it in M/S mode, and with the side-chain high‑pass filter engaged at around 100‑150Hz. Whichever approach you prefer, it's still useful to be able to switch between M/S and L/R, and to use it on two mono sources (it proved to be a rather nice, gentle vocal compressor, for example).

Used in a mix context, I found the harmonic distortion to be relatively subtle, even in the high‑coloration mode: there's very little going on compared with an obvious 'character' processor such as a Urei/UA 1176 (I was testing an 1176‑inspired unit at the same time as this, so I can say that with some confidence...). Campbell says that the distortion is about 1 percent at 50Hz, compared with the 2‑3 percent of an 1176, and although I didn't have the opportunity to take measurements, the sonic results are certainly consistent with that claim — there's a certain thickening of the low frequencies, but nothing over the top. You'll need to look elsewhere if that's what you're after, but that's obviously not this unit's raison d'être. (I imagine the mastering engineers would run a mile if it were!)

The metering seemed a little unfamiliar to me at first, but when I grew accustomed to it, I found it really useful. Rather than light all the LEDs up/down to a certain point, the signal manifests itself as a moving dot, with only one or two LEDs lit at any one time. I found that this made it much easier to compare gain reduction on the Mid and Sides channels from a distance. The meter LEDs are bright and easily visible from quite a way away.

I usually tend to reach by choice for processors with oodles of character, but in some circumstances you just want a wonderfully understated, clean‑sounding compressor that gets on and does the job. In this role, the Stereo Toolbox can hold its head up in more expensive company. A single unit would be a welcome addition to any mix engineer's arsenal, whether for use on the master bus, on individual sources, or on group buses. The harmonic distortion, the M/S mode, and the high-pass filter, though, make the Stereo Toolbox so much more than a run‑of‑the‑mill processor. As far as I'm aware, the switchable L/R and M/S compression is unique amongst 500-series modules, just as Safe Sound claim. I can also appreciate their argument that there's more stem mixing going on these days, whether it's by the mastering or the mix engineer, and for that, this should work very well.

With that last point in mind, it was a shame that I didn't have the chance to try deploying multiple Stereo Toolboxes on the group buses. I've been using similar software tools — M/S balancing, clean compression, subtle harmonic distortion and so on — on the group buses during mixdown for a while now, and having access to this processor made me rather envious of the possibilities that would open up were I to team up several Stereo Toolboxes with something like Radial's Workhorse rack: you could accommodate four of them in 3U of 19‑inch rackspace, complete with analogue summing. Hmmm...

I really liked the Stereo Toolbox, particularly for providing 'mix glue'. It does exactly what it sets out to do, effortlessly, and it's versatile too. If you've not used M/S bus compression, this is a great way to try it out, because if you don't like it, you still get a very nice conventional stereo compressor into the bargain. The price is also very competitive, especially if you already possess a suitable Lunchbox rack to put it in.