Rumble Marching & Cinematic Drums is a collaborative project between Sample Logic and System Blue, capturing a certain kind of militaristic drumming which, when you think about it, is used extensively in film and TV, and even on the odd hit pop record — just ask Rolf Harris. 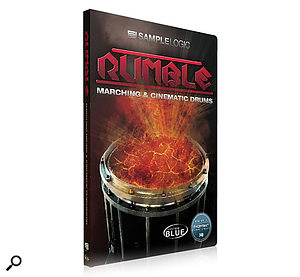 The collection comes with a program that allows it to integrate with Avid Sibelius 7 notation software, indicating the makers' aim of attracting film and TV score writers.

Installation requires the user to already have a version of Kontakt Player 4, which is free to download from the Native Instruments web site. Once Kontakt is in place, you need to drag the Rumble folder to a hard-drive location that can cope with its 6GB of sample data. Then starts a teeth‑gnashing activation process that, I promise, does eventually come to an end! The pay-off is that Kontakt is a very sophisticated processing tool, within which Rumble becomes more than just a collection of sounds. But what about those raw sounds themselves?

The recordings were made by Leslie Ann Jones on the scoring stage at Skywalker Sound, featuring the DCI World Champion Blue Devils. The team aimed to reproduce a modern, filmic sound by using industry‑standard recording techniques and facilities, and multiple mic placements.

Ensemble patches are a good place to start if you're looking for a quick fix, but for more subtle, customised compositions, the individual patch folders are where the basic building blocks are found. Options include rolls (crescendo and diminuendo), buzzes, flams and single hits, played with brushes, rubber beads and different types of sticks on a variety of drum‑head configurations; the variations go on and on. For most imaginable jobs, Rumble should have it covered. As for the sounds themselves, they have just the right dynamic punch, thump and crack one would expect to hear from a playing style designed to synchronise and focus marchers.

Apart from the standard traditional instrument sounds, there are also morphed sounds for those more esoteric and atmospheric jobs. These are the kind of sound effects found in umpteen films and include, for example: low, menacing rumbles, thumps that suggest monster footsteps, and distorted clangs appropriate for vehicles from post-apocalyptic worlds. Think Gerry Goldsmith's Planet Of The Apes theme and you'll get the picture. There is logic to the file structure, although it is essential to kick off by referring to the PDF in order to really see where everything is filed and mapped.

I suspect that low-budget film makers wanting a touch of the Hollywood blockbuster will find plenty of uses for Rumble, as will those working in the TV and games industries. Electronic music composers, as advertised, should also find the samples useful (mainly the ones in the extensive 'morphed' folders), given that they can be treated further with Kontakt's vast array of processing tools.

At £189$299.99, Rumble certainly isn't a budget sample collection, but it does exactly what it sets out to do, and you can't really ask for more than that. Tom Flint