Shure are recent arrivals in the pro headphone market. Do their new flagship cans measure up against more established names in the field? 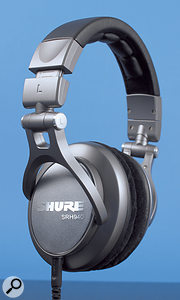 Shure are perhaps better known for their microphones than for transducers that work in the opposite direction, but their SRH series of professional headphones, launched two years ago, promises to change all that. The original flagship model in the range, the SRH840, is still available but, as the model number suggests, the new SRH940 sits above its forerunners in the product range. Designed for studio use and critical listening, they promise "accurate response across the entire audio spectrum, smooth high‑end extension, [and] tight bass”.

The SRH940s ship in a smart, padded case. Both cable and earpads are detachable, and the package includes spare earpads and a choice of straight or curly cables. These terminate in a 3.5mm mini‑jack with a screw thread allowing a quarter‑inch adaptor to be fitted, while the other end uses a smaller, 2.5mm mini‑jack with a plastic barrel that twists half a turn to lock into place. The phones themselves appear to be solidly built from a firm grey plastic, and the frame and earcup mountings incorporate plenty of flexibility, allowing the cups to be rotated in every conceivable direction, and probably some directions that are not readily conceived of.

The construction arrangement means that the cups exert slightly more pressure on and around the ear than some phones, but they are well padded and comfortable enough for long listening sessions, and this pressure ensures that isolation from external sounds is pretty good. For me, the only suggestion of discomfort came from the top band, which has a tendency to load the entire weight of the phones onto a small point on top of the head instead of spreading it out, but I suspect that has as much to do with the shape of my head as with the design of these phones. With an impedance rated at 42Ω and a sensitivity of 100dB SPL/mW, the SRH940s shouldn't require any sort of esoteric headphone amp to drive them.

Various adjectives come to mind to describe the tonality of the SRH940s, among them 'punchy', 'muscular' and 'forward'. They're not rich and plummy like my usual Sony MDR7509s, nor do they share the crystalline high‑end brightness of the Ultrasone phones I've tried. Rather, they seem to have a broad lift in the mid‑range, from perhaps 1‑3 kHz, which brings out the snarl of an electric guitar or the ring of a snare drum without over-emphasising sibilants or making crash cymbals leap out of the mix. They're perfect for rock music, or indeed anything else where the main focus is mid‑range impact and excitement. Transients are well represented, and the high frequencies seem balanced.

If there's a down side, it's that the bass is arguably a bit too tight. Whenever I turned to electronica, or indeed any mix that leaned on a heavy bottom end, I was struck with a gut feeling that something was lacking. It's not that bass and low mids are absent or inaccurate; rather, they are slightly overshadowed by that prominent mid range, in a way that sometimes robs them of 'oomph'. If you like bass to be an emotional experience, these are not the phones for you.

That said, we all know that reproducing sound to give maximum enjoyment is a very different business from reproducing it in a way that is useful to the mix engineer. And for most studio purposes, I think the frequency balance of these phones, with its ruthless absence of hype at the low end, is much more a blessing than a curse. Most mixes stand or fall on the mid-range, and you quickly appreciate the detail and clarity that these phones bring to that region. After a lot of listening, I even began to feel that my beloved Sonys were sounding muddy and veiled by comparison. I wouldn't want to make dubstep on these, but for any sort of guitar‑based music, they're hard to beat, and the good levels of comfort and isolation make them ideal for tracking as well as mixing.