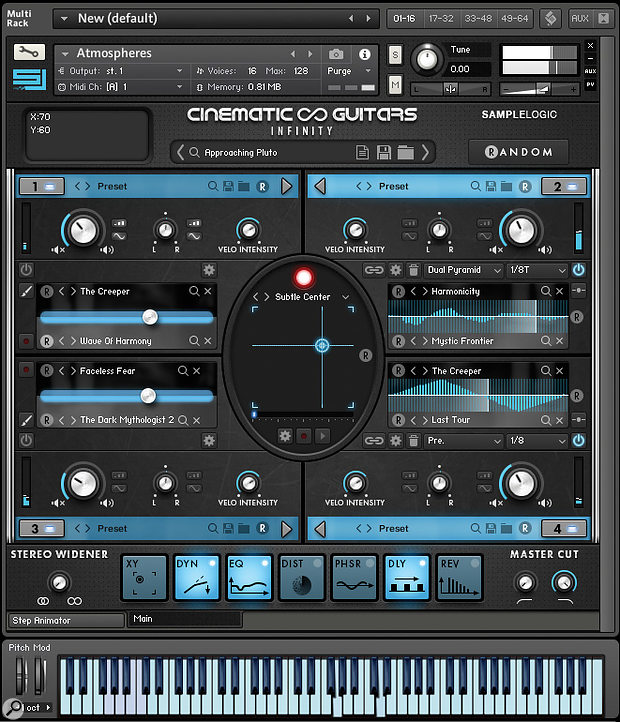 The Kontakt front–end looks busy, but it does provide a huge array of creative options.

Sample Logic’s Cinematic Guitars Infinity proves to be a lot more than the sum of its parts.

Back in 2011, Nick Magnus reviewed Sample Logic’s first Cinematic Guitars library and was hugely impressed with it as a means of creating soundscapes, textures and rhythms that would be ideal in a music–for–picture context. Cinematic Guitars 2 followed, but now we have Cinematic Guitars Infinity. This combines CG1 and CG2 but adds Cinematic Guitars 3 (with all-new samples) and presents all of these libraries with a new Kontakt front–end.

The numbers make interesting reading: nearly 5000 Kontakt instruments and multis, 26GB of samples (quite a download), 2.4 trillion sound combinations (er... I didn’t count them) and a hefty $599.99 price tag (although there is ‘upgrade’ pricing if you already own CG1 or CG2). This is, I suspect, a product that is most likely to find a home with the more serious (and reasonably well–heeled) film and media composer.

Given the quantity of material, it’s impossible to give a comprehensive overview of all the sounds but, if you like your guitars to sound like, well, not guitars, then this is most certainly a library for you. While the guitar may well be the source, the samples have been processed, manipulated, and otherwise mangled in all sorts of creative ways. The results are wonderful, sometimes weird, but pretty much always very inspiring.

The installation includes all the original CG1 and CG2 content plus the all–new CG3 content, and each library has its own Kontakt front–end (as explored by Nick in his CG1 review). The Infinity front–end — an intuitive and very deep interface built within Kontakt — is what makes Cinematic Guitars Infinity stand out from its predecessors; Sample Logic have created a powerful means by which you can exploit the extensive CG content. Unlike in the three CG libraries (and most Kontakt–based libraries), that content isn’t really accessed via Kontakt’s own sound browser. Indeed, within Infinity, you just get four Kontakt instruments to choose between: Atmospheres, Instrumentals, Loops and Percussives. However, when you pick one of these, you can then access a dedicated browser built into Infinity itself to access the presets from some very well–stocked sub–categories.

The Infinity UI itself is divided into two screens: Main and Step Animator. At the top–level, as seen when the Main screen is selected, Infinity provides a virtual instrument that can combine up to eight sound sources (individual sounds drawn from the core libraries) into four ‘Soundcores’ (each holding two of the sound sources). Then, via the centrally placed X-Y grid, you can blend these four Soundcores to taste. The sound preset system doesn’t just operate at the top–level, however, and there are also presets at the Soundcore level — and, of course, at the individual instrument level.

Sound blending in this way has been done before, but the Infinity front–end does seem to take this concept, well, if not quite to infinity and beyond, then some very considerable distance. For example, within each Soundcore, not only you can adjust the level between the two contributing sounds, you also get to automate changes in the respective levels using a step–based pattern sequencer. Even used with a single Soundcore, this can introduce some great variations. Multiply the process across all four Soundscores and add in blending of these via the central X-Y controller (which can also be automated), and the potential to create sounds that can evolve with time — either dramatically or subtly — is massive. 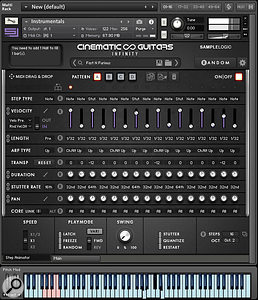 The Step Animator provides some excellent step–based pattern-sequencing options.The options don’t stop there, though. For each Soundcore you also have volume and pan automation options and a suite of effects including delay, distortion, reverb, a filter and an ADSR envelope. There is also a suite of Master Effects displayed at the base of the interface. Click on any of these and further control options appear. If you pop open the X-Y section of the Master Effects strip then you get two further X-Y pad controls, each of which can be assigned to preset control elements of the Master Effects chain and both of which also feature automation.

Want more options? Well, toggle over to the Step Animator via the tab button located bottom–left of the UI and you can access a very sophisticated step–based pattern sequencer. If you want to create arpeggiated performances from your sounds, this is where to come. You get lanes for velocity, length, transpose, duration, pan and a number of more creative options such as stutter rate and step type. It’s worth dipping into this screen with a few of the arpeggiator–based presets to grasp exactly how all this works, but this is a powerful creative tool.

The other feature of Infinity is the fact that almost every major element of the interface on both the Main and Step Animator screens includes a ‘random’ feature (those small ‘R’ buttons). You can roll the dice for a complete configuration or just for selected components whenever you need some fresh inspiration.

The Sound Of Infinity? 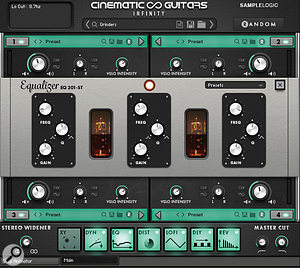 Cinematic Guitars is well–stocked with effects options for additional sound shaping.While the interface offers a huge array of options for sound-shaping, this would be only so much fluff if Infinity sounded like a bee in a bottle. Thankfully, it does not. I expect if you dug deep enough and tweaked controls enough, you could make it sound like a bee in a bottle, but that would be a bit of a shame because the huge collection of presets are consistently wonderful.

The four top–level preset labels provide suitable initial clues as to what to expect and the interface adopts a different colour scheme for each, making it easy to see at a glance which instrument type you are working with. The Atmospheres (blue) provide some truly fabulous evolving textures and soundscapes and, whether you want something gentle and uplifting or scary and sci–fi, Infinity has a massive collection of inspiring options.

The Instrumentals instrument (purple), as might be expected, provides a collection of playable instruments divided into arpeggiated, guitars, pads and synth sub–categories. Yes, there are presets that actually sound like sample–based guitars, although there is generally a bit of a twist and lots of other sound types have also been conjured up thanks to Infinity’s extensive processing options. 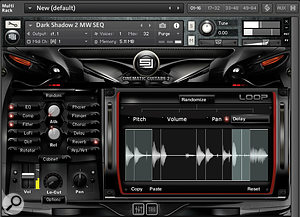 You can still access all the individual Cinematic Guitar sounds through the original front–end if you wish.

For more rhythmic sounds, the Loops (green) and Percussives (red) instruments provide plenty of ammunition. These cover a vast array of styles so, whether you want something organic and natural sounding or something more appropriate for large dancing robots (and most stops in–between), then you will find it here in multiple varieties.

Cinematic Guitars Infinity is hugely impressive. It is possible to take a single preset and, with just a few carefully chosen notes, you could easily create a cue or two for your next music–to–picture project. However, load up an instance of each of Infinity’s four instruments and start combining the sounds, and you have something truly inspiring.

I can see professional media composers lapping this up despite the fairly substantial asking price. It won’t cover all your composing needs but, for modern film and TV soundtrack work (that is, more electronic and organic than orchestral), it will tick lots of boxes. Expect to hear the sounds of Cinematic Guitars Infinity in a blockbuster film near you soon.

For film and media composers, Cinematic Guitars Infinity is going to tick lots of boxes. A hefty price tag but, as a professional sound design/composition tool, well worth the asking price.