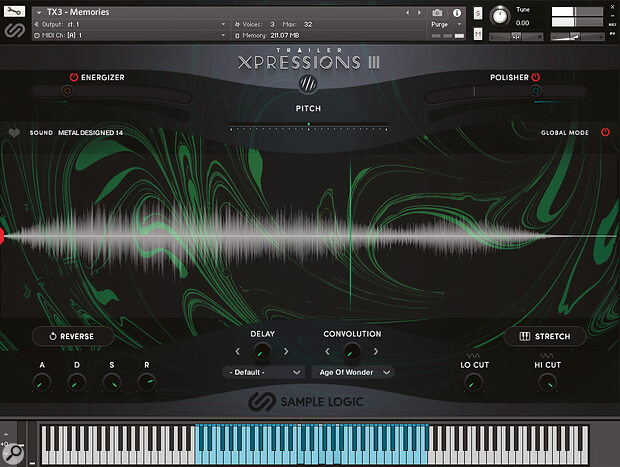 Sample Logic have obviously found a winning formula with Trailer Xpressions, as this release represents the third in the series. As with their two previous titles, Trailer Xpressions III represents something of a collaboration, utilising Sample Logic’s slick Kontakt front‑end (the library requires the full version of Kontakt 5.8.1 or later) and, on this occasion, an underlying 3GB+ of sample content provided by Sampletrax.

Thankfully for fans of the series, the sounds in Trailer Xpressions III don’t veer too far from the previous versions. As well as getting access to the raw WAV files (for those that simply want to drop them directly into their DAW), these are organised in 28 helpfully named Kontakt nki instruments.

With titles such as Atmospheres, Braams, Drones, Drops, Harmonics Hits, Hit Impacts, Low Hits, Stingers, Swells and Woosh Transitions, you can pretty much guess the kinds of things you are going to get. However, other presets, such as Burst Blast Glitch (sounds that tend to combine elements of hits, metallic screeches and electronic drops), Fractal Textures (electronic textures with occasional rhythmic elements) and Larsen Feedbacks (includes some dissonant electronic sounds) all provide plenty of variety and sonic ammunition. There are also four vocal‑based presets and, while unlikely to outdo a dedicated vocal sample library, they are useful additional textures to have.

Each themed preset features a number of individual samples arranged across the MIDI keyboard and, as you can play polyphonically, you can easily layer multiple samples to create unique textures.

Each themed preset features a number of individual samples arranged across the MIDI keyboard and, as you can play polyphonically, you can easily layer multiple samples to create unique textures. However, the front‑end, which remains very easy to use, has a few useful new features for this edition, and one of those is called Stretch. This takes the last sample you triggered and pitch maps it across the entire keyboard. While this obviously lets you pitch‑shift with ease (although the Pitch slider can also be used for this), you can get some surprisingly playable instruments from some of the content.

Other new features include a full ADSR envelope, tempo‑sync’ed LFOs for both the low‑ and high‑cut filters (great for additional ‘sweep’ options), and a Reverse button (go on, guess!). That you can apply any of these tweaks either at a global (all samples in a preset) or individual sample level adds further flexibility.

On the one hand, the world is not short of sample libraries based upon hits, risers and scary drones but, on the other hand, very few of those libraries can match the combination of slick UI and Hollywood‑ready sound Trailer Xpressions III offers. No, it’s not cheap, but busy media composers with any interest in composing/sound design for horror, drama, sci‑fi or trailers will undoubtedly lap it up.