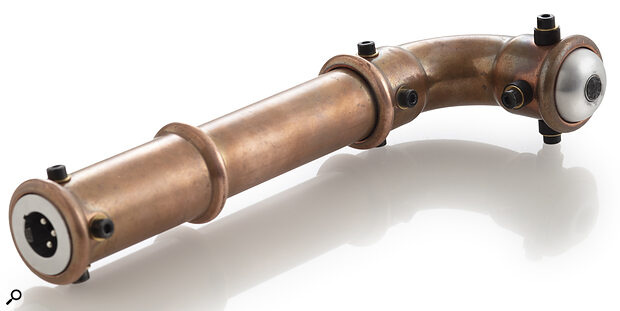 With its built‑in compressor set to ‘smash’, the Periscope earns its place in more sessions than you’d think.

Scope Labs’ Periscope looks like an eyeball lodged in a piece of Victorian plumbing, and comes in a replica treasure chest lined with shocking pink satin. If there was an SOS Award for Most Steampunk Studio Item, this would sweep the field. It also gets a special commendation for having the only spec sheet that’s ever made me laugh out loud.

The metal hemisphere at the business end actually houses not an eyeball but an ear, in the shape of a miniature omnidirectional electret microphone capsule. Within the Periscope’s copper‑coloured body, meanwhile, your 48V phantom supply doesn’t only feed the impedance converter. It also powers a built‑in analogue compressor, hard‑wired to nuke the signal into oblivion.

The Periscope is undoubtedly novel, then, but is it merely a novelty? When we all have plug‑in folders stuffed full of modelled vintage dynamics units, why would we need a mic with an entirely preset compressor built in?

Well, there is a boring reason why the Periscope can be useful. In most studios, it’s easy for the engineer to talk to the musicians, but unless they have vocal mics, it can be hard to hear their replies. SSL consoles thus featured a heavily compressed ‘listenback’ or ‘reverse talkback’ channel, famously exploited by Hugh Padgham to create the monster drum sound on tracks like ‘In The Air Tonight’. Most consoles don’t boast such luxuries, and the Periscope fulfils this function extremely well.

You’ll find yourself leaving it permanently set up so that you can hear, at the press of a button, what it brings to any given session.

However, most people in the market for a microphone borrowed from Captain Nemo’s conning tower probably aren’t thinking of utility. They’re thinking of monster drum sounds, and the Periscope brooks no compromise here. The compressor can’t be switched off or adjusted in any way, and it’s set up to deliver a lot of gain reduction even on quiet sources. So, when you put it up as a room mic, it doesn’t just politely rein in the odd overzealous floor tom. It delivers the kind of frontal assault you’d get from an 1176 in ‘all buttons in’ mode, and then some.

As you’d expect, it is hit and miss. You’ll need a good‑sounding room, because you’re going to hear the room. It can be noisy on quiet sources, and if the drummer is heavy on the cymbals, the results can be more ‘interesting’ than usable. But they’re not easily recreated using conventional mics and plug‑ins, and if you’re thinking ‘Couldn’t I just patch in a compressor on any mic and set it up exactly right for the source?’ you’ll be missing the point. Even if you happen to have a spare 1176 kicking around, how often do you actually have the time to set something like this up on the off‑chance that it’ll be useful?

The Periscope’s USP is immediacy. You’ll find yourself leaving it permanently set up so that you can hear, at the press of a button, what it brings to any given session. It can be surprisingly usable on things that aren’t drums, and it can make the most ordinary drum kit sound like an approaching avalanche. And even if you don’t use it in the finished track, it can be an inspiring and useful source to feed into musicians’ monitor mixes.

At first glance, the Periscope might seem expensive for a one‑trick pony. But its one trick is a good one that you’ll use more often than you think, and it’s not obvious how you’d recreate it more affordably. You can pick up a decent pencil mic for £100 or so, but where will you get an analogue compressor that’s tailored to work perfectly with it for maximum sonic destruction? And does it come in a treasure chest? The Periscope might not be a studio essential, but it’s the most fun I’ve had with a microphone in a very long time.

The Periscope is quirky and fun — and a surprisingly useful studio tool.