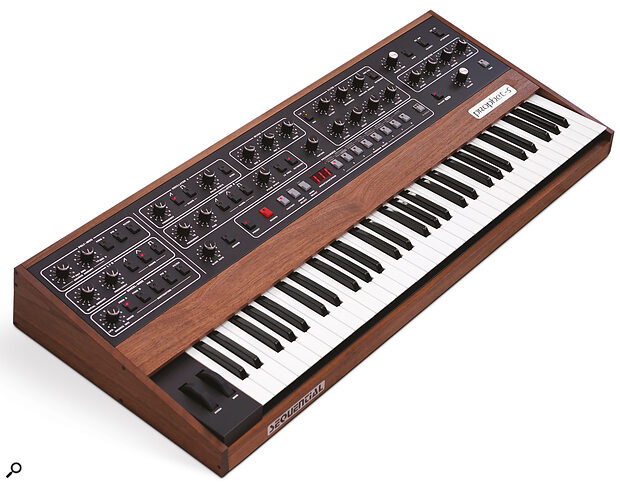 A conquering hero returns to the fray after long years in exile. Does the new Prophet Rev 4 still have the power to take on the world?

Great excitement here at Stewart HQ as a courier drops off an eagerly anticipated package. No reflection on the UPS delivery service, but I’ve been waiting 20 years for this: since reluctantly putting my beloved Prophet‑5 analogue synth out to pasture in 2001 I’d lived in hope of finding a suitable replacement but, despite some promising leads, it never happened. Then out of the blue last summer, an email from the makers: “We are nearly finished with something that I think might interest you. I’ll get back to you soon with details.” Fast forward four months, and Sequential’s new Prophet‑10 Rev 4 analogue synth now occupies pride of place in my music room. The stars have aligned — my trusty musical accomplice is back in the fold, spruced up, fighting fit and ready to rock.

If you’re wondering what all the fuss is about, take a few moments to reflect on this landmark keyboard’s history. The brainchild of US engineer Dave Smith, the Prophet‑5 was the world’s first fully programmable polyphonic synthesizer. Its breakthrough design enabled keyboard players to create their own sounds and play chords to their heart’s content, which had a revolutionary effect on the music of the day. When Smith’s tiny Sequential Circuits company unveiled their new creation in January 1978 it was an instant success: everybody wanted one, Pink Floyd bought eight and Abba ordered 11! Before long Sequential had a backlog of orders stretching far into the future, though the then‑Head of Sales Bob Styles says that Mr Smith (a huge Who fan) made sure Pete Townshend could jump the queue.

With the demand came problems. The SSM chips used in the early units (more on which later) were in short supply and unreliable to boot, and when the first single‑manual Prophet‑10 units (which doubled the Prophet‑5’s polyphony) shipped, they had to be instantly recalled due to tuning problems caused by heat build‑up. Though less severely affected, the early Prophet‑5 Rev 1 and Rev 2 models also suffered from unstable tuning, but happily the rejigged Rev 3 proved more reliable and became a best‑seller until production ceased in 1984. Consequently, most secondhand Prophets on sale nowadays tend to be the Rev 3 vintage.

The new Prophet Rev 4 instruments take over where their predecessors left off, nailing the reliability issues and building on the legacy with a bunch of new features. The Prophet‑5 and Prophet‑10 Rev 4s are physically identical, the only operational differences being that by virtue of its additional voices, the latter takes twice as long to complete its autotune/calibrate cycle and also has a slightly higher maximum power consumption. That said, I’m pleased to report that unlike the original, it doesn’t get hot!

Housed in an all‑steel chassis with a classy black walnut heartwood body and trim matching the look of a vintage Rev 3, the new Prophet uses a five‑octave, semi‑weighted Fatar TP/9S keyboard. Personally I prefer unweighted keys, but those with good pianistic technique will probably enjoy the solid feel and noise‑free action of this keyboard. Pianists will also appreciate the Prophet‑10’s higher polyphony when piling up notes via their sustain pedal, though when playing my old Prophet‑5 I usually found its five notes were sufficient — you just have to cool it with the left‑hand octaves!

The pitch and mod wheels remain in their original, sensible locations to the left of the keyboard (why manufacturers put them elsewhere beats me), while the rear panel includes two welcome innovations: USB connectivity and a headphone output (nominally stereo, though the synth remains as defiantly mono as its ancestor), with headphone level controlled by the master volume knob. There are also connections for MIDI In, Out and Thru, sustain pedal, volume and filter cutoff expression pedals, and unbalanced audio out on a standard quarter‑inch jack. Jack connections are also provided for CV and Gate in and out.

Good news for gigging keyboardists: the new Prophets operate worldwide on voltages between 100 and 240 Volts at 50 to 60 Hz, weigh only 31lbs (14.06kg) and fit comfortably on a conventional keyboard stand. Tuning bugbears appear to be a thing of the past; it’s advisable to use the internal A=440 tone to check the master tuning from time to time, but I found the synth’s 10 voices maintained a solid tuning relationship over a period of days.

The Prophet‑5 and 10 share the same back panel, with both...