Designed for musicians on the move, this portable PA offers a wide range of uses for almost any gigging scenario.

Samson’s Expedition Express portable PA is a lightweight, battery-powered, two-way speaker system that features built-in Bluetooth connectivity, enabling it to work wirelessly with a Bluetooth-equipped audio device. At around 10.5lbs (4.7kg) in weight, and measuring just 10.5 x 10.5 x 15.75 inches (222 x 210 x 323 mm), the speaker is eminently portable. Its six-inch woofer and one-inch tweeter reside in a moulded and internally ribbed polypropylene ported enclosure, which has a standard pole fitting recess in the base and a carry handle built into the top. The cabinet shape allows for both forward-facing and upward-angled placement on a flat surface. 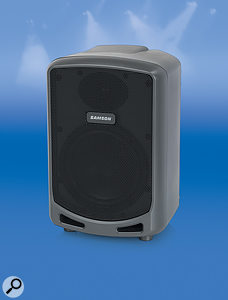 The Expedition Express can be used as part of a larger system, or on its own, thanks to a simple, built-in, three-channel mixer. Its inputs comprise an XLR/jack ‘combi’ input for mic or line sources, a line or instrument quarter-inch jack socket, and a 3.5mm stereo mini-jack input (summed to mono) for consumer playback devices. There’s no phantom power, so it can’t accept standard capacitor or other active mics unless battery powered or used with an external phantom-power supply. There are also no in-built effects, as there are with some similar products like the Roland Street Cube.

The control panel provides individual level controls for the three inputs, along with mic/line switching for the XLR input and master bass and treble controls. These are ‘flat’ at their centre position, and provide up to 15dB cut or boost. For Bluetooth operation there’s a pairing button and confirmation LED, which leaves just the mains power switch and a quarter-inch line-out link jack socket. The latter carries the mixed signal, making it possible to cascade multiple speakers together.

The internal, sealed, lead-acid gel battery is rechargeable and allows for up to eight hours of continuous use, though it is also possible run the system from the mains via the included universal voltage power adaptor (which also charges the battery). Charging takes around four to eight hours, and replacement batteries are available in the event that the supplied battery reaches the end of its life.

To set up for Bluetooth operation, it is necessary to press the Pair button on the rear panel to make the speaker discoverable, and then to select ‘Samson Express’ from your bluetooth device. If your device asks for a passcode (which my iPad didn’t), enter four zeros and press OK. The Bluetooth indicator flashes blue, becoming permanently lit when the pairing is complete. With the Bluetooth connection made, channel 3’s volume control adjusts your Bluetooth device’s contribution to the mix. 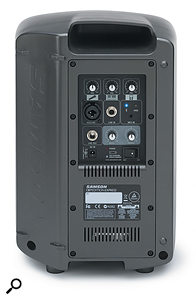 The rear panel houses all the I/O connections, including three inputs that can accommodate mic, line or instrument signals, and a link-output jack for feeding the mix on to another speaker.

Before testing the speaker, it is worth covering some of its potential applications. The battery-powered aspect makes it well-suited to busking, garden parties, boat trips, outdoor announcements, dance groups and so on, but I have a feeling that it could also come in handy for those awkward L-shaped bar venus where you need an extra speaker to project more of the vocals around the corner. If you can source a suitable analogue-audio-to-Bluetooth adaptor, you could feed it audio from your mixer without having to run cables, as long as you’re within Bluetooth range, which is typically up to 30 feet. Small powered speakers such as this are also great for handling vocals for band rehearsals where you don’t want to set up the entire PA. It could also double as a personal stage monitor for smaller gigs.

In my tests all the inputs worked as specified, with no obvious background noise when using the mic input. Bluetooth setup was also painless and fast. Used with vocals both the clarity and volume was impressive,showing little evidence of the boxy resonance that sometimes afflicts moulded speakers. Full-range music also plays with great clarity and a good sense of mid-range focus, though the bass end tends to be a little hyped and favours a fairly narrow frequency range, as you’d expect from a small ported speaker. Even so, it sounds pretty good on a subjective level with no excessive bass boom. Obviously the more bass end you ask it to handle, the less level you can expect to get before the sound quality suffers, but I was surprised at just how much clean level was on tap from such a small speaker. The spec sheet makes no mention of the maximum available SPL, or indeed the amplifier power, but you may well find that feedback limits the volume you can get out of it before it runs out of level.

Though there are no effects or guitar-amp models present, the Samson Expedition Express is around half the price of Roland’s Street Cube, which I use myself for small portable events. The Samson is comparable in terms of sound quality and achievable volume, with perhaps a slightly better ability to handle bass. It also has practical advantages in being pole mountable and having Bluetooth connectivity. With its sensible battery life it should meet most requirements, and, of course, it can run from the mains supply/charger — though the manual suggests that charging only takes place when the power switch is in the off position, in which case you can’t play and charge at the same time. Given its attractive price and the number of uses it has, the Samson Expedition Express could be the audio equivalent of a ‘Get Out Of Jail Free’ card.

I haven’t tried many battery-powered amplifiers and in this size range the only one I can vouch for personally is the Roland Cube Street, which offers a more advanced feature set in the way of amp modelling and effects, but also costs significantly more.

A no-frills powered speaker with a simple mixer and Bluetooth connectivity built in.