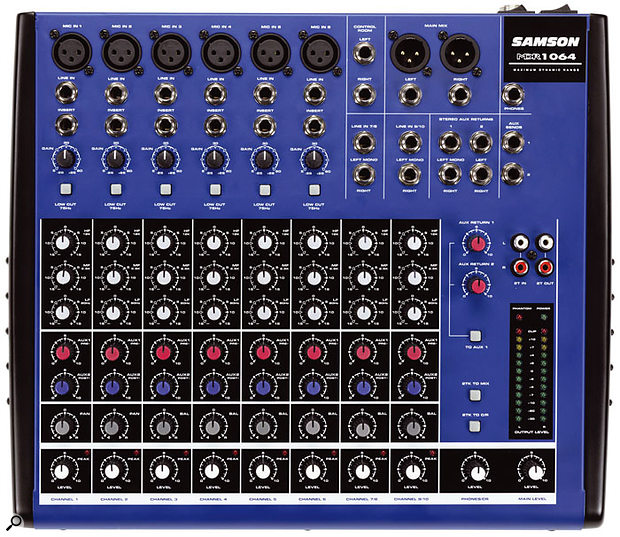 While the world and its dog are going digital (see Sony's cyber-dogs for confirmation of this!), the small analogue mixer still has a valid place in the studio or live-performance setup. Whether you need a few decent mic preamps, the ability to mix external synths, or a means to control your monitoring, a small mixer is often the most cost-effective and flexible solution. Samson's MDR1064 is a small-format, low-cost mixer offering ten channels in all, six of which are equipped with mic preamps and four of which are arranged as two stereo pairs. On top of this are two stereo aux returns, plus two-track sends and returns for recording to and playing back from an external stereo recorder. As with many smaller mixers, this one is powered from an external adaptor which locks to the mixer via a threaded, three-pin connector.

Built from sheet steel with moulded-plastic end cheeks, the Samson MDR1064 is physically quite shallow and has a rounded front edge to make using it more comfortable. As with some other smaller mixers, all level control is via knobs rather than faders, which saves on both cost and space, and all the connections other than the PSU input are on the top panel for ease of access.

All six mic channels have both mic and line inputs (on XLR and balanced quarter-inch jacks respectively), with a further TRS jack functioning as an insert point between the mic preamp and EQ section. A Gain Trim control sets the preamp gain, and there's a further button to bring in a low-cut filter. The stereo channels have dual quarter-inch balanced jack inputs for line-level signals, but no insert points, and feature the same EQ and aux-send setup as the mono mic/line channels. Each channel has a three-band equaliser comprising three fixed-frequency filters offering ±15dB of gain. The high and low sections are conventional shelving designs operating at 12kHz and 80Hz respectively, while the mid-band is set at 2.5kHz. While not immensely flexible, this type of EQ is fine for light tonal shaping, and a mid-control is sometimes useful for cutting harshness or vocal honkiness. However, choosing 2.5kHz as a mid-range frequency doesn't strike me as particularly flexible. The EQ doesn't have a bypass switch, but all the controls have a centre detent for setting the flat position.

The mixer has two aux sends per channel, where aux one is pre-fader and aux two is post-fader. These designations are fixed, and there are no master send-level controls, so the levels have to be set at channel level or via the input gain control on the external device. That leaves the pan controls (balance on the stereo channels) and the channel level controls. So far then, this is a very straightforward little mixer with no devious tricks up its sleeves to confuse the unwary.

This simplicity carries over to the master section, where there are two 12-segment level meters with additional power and phantom status LEDs, a master level knob to control the main stereo mix, and a further knob to regulate the headphone/control-room level. Two buttons allow the stereo two-track return to be routed either to the stereo mix, or to the control room mix, or to both, and there are two aux-return level controls for the two sets of stereo returns. A further button labelled To Aux 1 allows the return from an effects unit to be fed into the aux-one mix, which is generally used to provide a headphone or stage-monitor mix. In the studio, this means reverb can be added to the headphone mix without it being recorded. The two-track connections are on phonos as usual, and the main outs are available on both jacks and XLRs. The remaining output connections are all on unbalanced jacks.

Phantom power can be applied to the mic channels via a rocker switch on the rear panel next to the main power switch, and the phones output is in the top right-hand corner of the front panel so that the phones cable won't obscure the rest of the connectors or controls. There are no solo or PFL buttons, so the input gain needs to be set by first setting the channel controls to their centre positions and then increasing the gain trims until the meters show a healthy level that leaves some headroom to avoid clipping.

Although this little mixer is about as simple as a mixer could be, it has a decent technical specification, with frequency response extending from 10Hz to 45kHz and an overall signal-to-noise ratio of 105dB. Distortion is very low, at better than 0.005 percent, though the mic-channel gain is limited to 40dB, which is a little on the low side. However, further gain can be added using the channel gain control and the output gain control, and, as my tests proved, the range of available gain turned out not to present any practical obstacle.

Sonically, the mic preamps are reasonably quiet and transparent-sounding, with no obvious coloration, and the gain controls are nicely progressive rather than having all the gain bunched up at the top end (as it is with some designs). Although the mic preamps have a maximum of 40dB of gain, there was adequate gain throughout the mixer to run a basic studio capacitor mic without having the gain anywhere near full up, and that was only recording speech.

The high and low EQ were fine, but my reservations regarding the choice of mid-frequency proved well founded when processing vocals, as boosting at 2.5kHz gives a rather hard presence to the sound (3.5-4kHz is generally a better presence zone) while cutting at this frequency sucks all the life out, making the result quite dull. It could however be useful for tweaking guitar or bass sounds, so shouldn't be written off altogether.

The MDR1064 is unashamedly a budget mixer with a basic set of features, but other than the limitations imposed by the fixed EQ mid-band control, it actually works very adequately, with low noise, generally good sound quality, and a clear layout. Having level knobs rather than faders may put off some users, but it helps reduce both the physical size and the cost of the mixer. There are lots of uses for a little mixer like this, from combining external synths prior to feeding them into a computer's audio interface, to mixing the outputs from an eight-track recorder. When used with a computer DAW, it also provides monitor control and headphone output. Ultimately, then, while it isn't particularly sophisticated or fancy, the MDR1064 offers a compact and capable solution to many small-scale mixing problems at a very low cost.

While offering nothing unusual, the MDR1064 is a competent little mixer at a very attractive price and meets a number of basic mixing requirements.

Mastering Essentials Part 3 - How loud should I master?
4 days 10 hours ago.