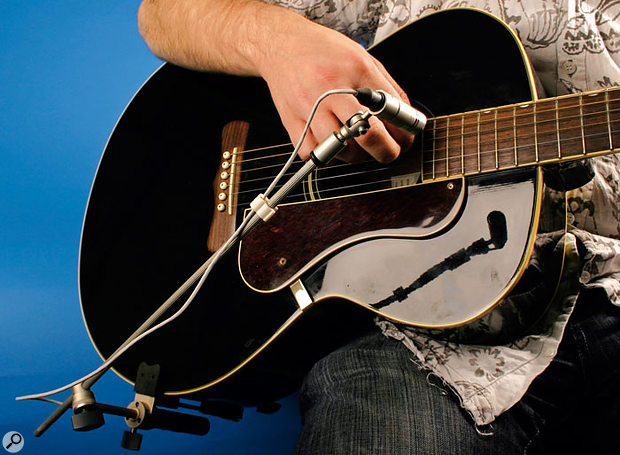 After vocals, acoustic guitar must be the most popular thing to poke a mic at — at least in a typical home studio — yet it isn't always the easiest instrument to record, because as soon as you find that magic sweet spot, the player moves! Solutions to this problem include pickups, which are reliable but not necessarily natural-sounding; mics that clip onto the edge of the sound hole, which also tend to pick up a less than optimal representation of the instrument; and conventional microphones that are fixed above the body of the guitar using some kind of stand-and-clamp assembly. Though the latter is the most cumbersome option, it is also the most effective in achieving a good sound.

We've already reviewed the excellent Xploraudio clamp system, which enables you to fit just about any type of microphone securely to your own guitar. This has the advantage that you can use anything from a small pencil mic to a large-diaphragm tube model, if you want to. SE have opted for an alternative, fully-integrated solution, using a true capacitor microphone with a very small capsule diameter. Small-diameter capsules offer an advantage when working close to a sound source: their off-axis response tends to be better than you'd get from a large-diaphragm model, which is important, given that an acoustic guitar radiates sound from all over the body, not just from the spot you aim the mic at.

Mechanically, the GM10 (which retails at £319) features a solidly-engineered clamping system that grips the body of the guitar. The clamp jaws are sleeved in a rubber-like material to improve grip and avoid damage to the finish of the instrument. There's also enough give in the rubber to allow the clamp to hold securely on instruments that don't have parallel front and back surfaces — which most acoustic guitars don't. A short boom-arm protrudes from the clamp on a swivel-joint. The boom-arm can be slid through the fixing and adjusted in angle to allow flexible positioning of the mic over the guitar body. The small mini-pencil-style microphone capsule assembly is fitted to the end of the boom arm and can also be swivelled, so there's no problem getting the mic in just the right position. Once you've found the sweet spot, the mic stays in the correct relative position no matter how much the player moves. The usual thumbscrews are used to tighten the assembly and, though the engineering looks (in true SE fashion) to be on the heavy side of robust, it doesn't seem to upset the balance of the guitar significantly. The only potential problem I found with the clamping system is that it protrudes quite a long way from the back of the guitar so you have to be careful where you fit it — otherwise you may not be able to hold the guitar comfortably. However, the mic boom is quite long, so you are able to reach the sweet spot from several locations on the guitar body.

The microphone is effectively split into two parts. The capsule assembly housing is on the end of the boom arm and the XLR output connector is close to the clamp assembly, providing a sensibly located connection point for a regular mic cable. This connector is attached to the capsule housing via a thinner cable which, again, makes for a more comfortable setup. This arrangement is good, as it saves having too much mass out on the end of the arm, where the cantilever effect conspires to magnify its effect on balance.

The microphone itself features one of the smallest diameter true-capacitor capsules I've come across (most mics this size or smaller are back-electrets) and requires 48 Volt phantom power to operate. It offers a fixed cardioid pickup pattern, which is good for minimising spill from other sources but may sound less natural than an omni when used under ideal conditions. A resilient shockmount separates the mic capsule from the mounting, and a further shockmount at the end of the boom-arm doubly isolates the mic against vibrations.

Sonically, the mic sounds just as you'd expect a good quality, small-diaphragm mic to sound, and it captures the acoustic guitar's tonality well, with plenty of weight at the bottom and open-sounding detail at the top. As ever, you have to move the mic around to find the sweet spot but this one generally seems happy pointing somewhere close to where the neck joins the body, though you can, of course, experiment with other positions. The double shock isolation is effective in keeping most of the guitar body vibration out of the mic and, at the distance this mic is normally used, there's no audible noise.

A system such as this completely eliminates tonal changes due to the player moving around, and can help gain more separation where the player also sings. Ergonomically, I think the clamp assembly of this SE system could use a bit of a rethink, to eliminate bits of hardware digging into your ribs when you're playing — but, as mentioned earlier, you do have plenty of scope in exactly where you mount the mic. In short, the GM10 is a good idea, it sounds good and, other than the somewhat intrusive mounting hardware, it is very nicely designed, combining light weight with robust engineering. Paul White

The GM10 offers an original and effective approach to acoustic guitar miking, which keeps the microphone in a consistent position in relation to the guitar.