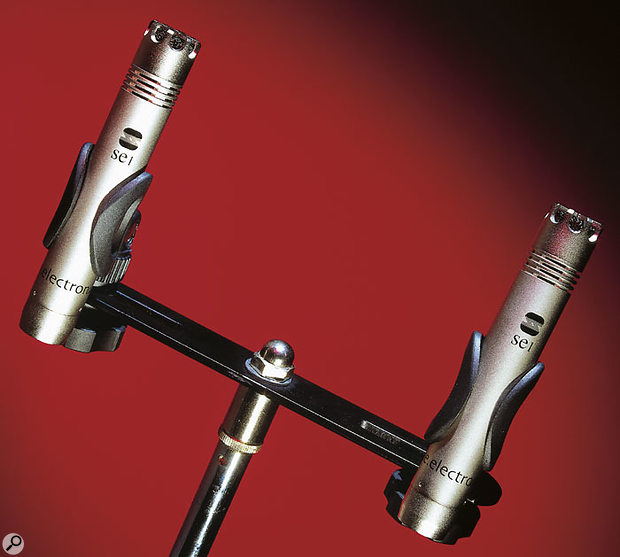 One of the most prolific manufacturers in China has launched three new affordable capacitor mics.

Available singly or as boxed matched pairs with a stereo mounting bar, the SE1 is a fixed-cardioid capacitor 'stick' mic with a diaphragm just over half an inch in diameter. It is built in China by the company who build many of the 'badged' budget mics that have flooded the market in recent years, but despite its very low cost the standard of design and mechanical engineering is impressive. SE Electronics is the brand name these mics are sold under when they are not badged for someone else. The wooden case is also very nicely made, with a rigid foam lining and accurate cutouts for the mic, the included mic clips and an impressive solid stereo bar.

With a sensitivity of around 10mV/Pa and a useful frequency range of 30Hz-20kHz, the matched SE1s come with individual frequency plots that reveal a subtle presence peak centred at around 8kHz which, along with the other small ripples in the response, becomes more pronounced when the mic is used off-axis. The plots don't include noise figures, but in practical tests the noise level was low enough to be irrelevant in all normal applications. The plots also show a better than expected degree of matching when you buy a stereo pair. Being a capacitor mic, the SE1 requires a 48V phantom power source, so connection is via the usual three-pin XLR connector, this one having gold-plated pins. The body of the mic itself is machined from metal and has a chunky, substantial feel with a satin silver finish. 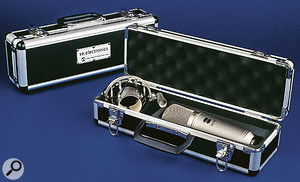 The SE1000 & SE2200 are shipped in robust hard cases with suspension shockmounts included.Photo: Mark EwingAlso from the SE stable are the SE1000 basic cardioid capacitor mic and the more sophisticated SE2200 cardioid capacitor model, featuring somewhat different body styling plus additional pad and filter switches. The traditionally styled SE1000 will be familiar to many readers, as it has been badged and sold as an 'own brand' mic by numerous companies keen to cash in on cost-effective Chinese mic manufacture. It features a large-diaphragm capsule, while its noise and sensitivity figures are comparable with other microphones of its type. In its SE Electronics guise it comes in a very nice camera-style case with a shockmount, and it performs far better than it has any right to for anything like the price. For anyone making the step up from recording with dynamic mics, this is an excellent way to experience capacitor mic performance at an 'impulse buy' price. Its nominally flat response, combined with a gentle high-end presence peak and a roll-off above 18kHz, works well for vocals, acoustic instruments and, in pairs, drum overheads. As with all capacitor mics, it needs to be used with a pop shield for vocal recording, though if you've no budget left then a wire coat-hanger with a stocking stretched over it will work just as well.

While the shape of the SE1000 suggests a famous European studio mic, the SE2200 has a tubular body and basket, with two slide switches built into the body immediately below the basket. Overall, it looks rather like a classic tube mic, though both these mics have FET preamps. One of the switches brings in a low-cut 'rumble' filter to reduce the effect of stand vibrations or traffic noise, while the other is a 10dB pad, designed to reduce the output from the mic when it is used close to very loud sources that might otherwise cause your mic preamp's input stage to overload and distort. Nominally one inch in diameter, the capsule again has a cardioid pattern and is well suited to vocal and acoustic instrument recording. The frequency response goes a little higher than the SE1000 at 25Hz­20kHz, the sensitivity is 16mV/Pa (not untypical for this type of mic), and the output noise is adequately low at just 17dBA. The sound isn't hugely different to that of the SE1000 other than perhaps a hint of extra high-end transparency, though the addition of pad and filter switches adds to the mic's versatility.

SE1 On The Session

I was fortunate enough to be working on a project with guitarist Gordon Giltrap when these mics arrived, so we decided to give them a try using them as a spaced stereo pair to record one of his Martin acoustic guitars, one mic favouring the neck and the other the body of the instrument. Not knowing what to expect, I was quite prepared to switch back to mics that I knew would do the job well, but as soon as we heard the sound back over the studio monitors, it was clear that these were easily up to the task. The slight presence lift brought out the picking detail in a natural way, but the sound was also full and well rounded with no unnatural coloration. Because of their ability to translate detail without being overstated or aggressive, a pair of these mics would make fine drum overheads or piano mics. They're also sensitive enough to use for ensemble or choir recordings.

As usual I moved the mics around to get the best sound rather than reaching for the EQ and, without needing any EQ or compression whatsoever, we ended up with a wonderful-sounding track — Gordon's playing clearly had more than a little bearing on this! All that was added was a hint of a small hall reverb and we had a track good enough to master.

We went on to try the mics with other guitars, as well as with other acoustic instruments lying around the studio, and they handled everything effortlessly, so if you're in the market either for a single instrument mic or a matched pair that can be used for stereo recording, I have no hesitation in recommending these as offering a level of performance that goes some way beyond what you'd expect for the price. You can get better quality if you pay 10 times the price, but the difference is less than you might expect. My only gripe was that the included mic clips didn't include European thread adaptors so I had to cannibalise my own mic collection before I could mount the clips on stands — but given the low cost of these mics, I can't bring myself to hold that against them!