SE aim to deliver a complete vocal recording package for the project studio on a budget: do they deliver? 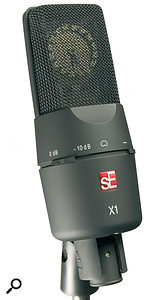 sE Electronics are now well established as a mic manufacturer whose products range from affordable but good to rather more expensive designs that offer something extra. They're also well known for their innovative Reflexion Filter, a very useful device that helps you to capture drier vocal recordings in less than ideal recording spaces. Even cardioid-pattern mics, which are very much the norm for vocal recording these days, are quite sensitive at the sides, but placing the mic at the 'mouth' of a Reflexion Filter cuts down on the amount of reflected sound entering the mic, without colouring the sound. Additionally, the Reflexion Filter attenuates the higher harmonics of the singer's voice before allowing them out into the room, so there's less high-frequency energy to splash around. It's a great system, and decent value for money — but it's not within every home-recordist's budget.

With their latest pair of products, the X1 microphone and the Project Studio Reflexion Filter, the company have turned their attention once again to the budget end of the market, and the intent is clearly to provide a vocal recording package that's priced within the reach of any project studio musician. The two products are available separately, but buying them as a bundle saves you more of your precious pennies.

Let's start with the mic itself. As with all other SE mics, the true‑capacitor X1 is manufactured in SE's Shanghai factory, which helps to keep manufacturing costs down. Despite the budget, the X1 is based around a hand‑built, large‑diaphragm, fixed‑cardioid capsule, with FET (Field Effect Transistor) transformerless electronics. Encouragingly, this mic includes the 10dB pad and low‑frequency cut switches that so often get missed off budget mics, simply because incorporating them makes it difficult to keep costs down.

The housing is rather elegant, too, with a rubbery matt‑black paint finish and a tough steel grille. A swivel stand‑mount is included, but if you prefer to use a shockmount instead, the one made for SE's 4400A model fits perfectly. Standard 48V phantom power is required, and the output signal is delivered via a conventionally wired, balanced XLR connector.

The Project Studio Reflexion Filter is simpler in construction than its more professional counterpart. However, this newer model includes a perforated metal shield, which is lined with fabric‑backed acoustic foam, and should therefore be effective for screening mid and high frequencies.

While the classic Reflexion Filter has very heavy mounting hardware, this Project Studio version comes with more elegant ironmongery, but it still needs to be set up with care. If you fit it to a vertical mic stand, the weight of both the mic and the Reflexion Filter is placed to one side, which can cause standard mic stands to topple over — so using a boom stand to centralise the weight is a much safer option.

The mounting hardware clamps onto the boom of the microphone stand, and a square bar affixed to a very secure swivel‑mount holds two vertical threaded bars, one of which is for mounting the mic and the other the Reflexion Filter. The bar holding the mic can be positioned anywhere along the square one, allowing for adjustment relative to the placing of the Reflexion Filter.

A design that fixes to the mic stand between the mic and Reflexion Filter mounting points (to keep the weight over the centre of gravity) might have been better purely for vocals, but apparently a lot of people also use their Reflexion Filters for recording acoustic guitar — in which case SE's current mounting option is, admittedly, more flexible.

If you must use a vertical microphone stand rather than the boom type, I'd recommend screwing the Reflexion Filter directly to the top of the stand via the thread in its base and then use the hardware to support only the microphone or, better still, mount the mic on a separate stand. 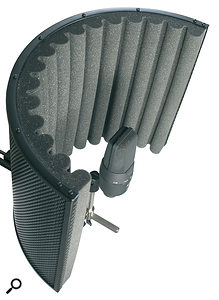 The SE X1 placed inside the Project Studio Reflection Filter.

Although little technical data was available at the time of this review, the X1 mic seemed more than adequately quiet when used in typical studio applications. Moreover, the low‑cut filter didn't make the voice sound excessively thin when engaged, as I've found with some other mics. Voices come across as solid, but with a lively, slightly forward character. The airy top end helps to get vocals across in a mix without making them sound over‑present in the 3‑5kHz region.

Compared with my own Audio‑Technica AT2020 mic, which is in the same price range as the X1, the sound and sensitivity is generally quite similar, but with the X1 sounding more airy at the high end — so it has clearly had a 'bump' engineered into the upper part of its frequency response. This will benefit singers whose voices lack definition, but it could also work against somebody with a naturally bright vocal character. SE haven't carried the coloration too far, though, and with the gentle application of EQ it should be possible to achieve good results with a fairly wide range of voice types. (In my experience, there seems to be more leeway with male than female vocals, as the latter, for some reason, often seem to be much more microphone‑critical.) The lows and mids seemed fairly flat, and vocal popping wasn't a problem when the mic was used with a pop shield.

Although this is primarily intended as a vocal mic, home recordists on a budget will also want to know how it performs on other sources, so I did a few more tests. I find that acoustic guitar can be quite revealing of a mic, and my recordings were encouraging: the sound gained a little high‑end sparkle, which can be a benefit where the guitar is part of a band mix. As with voice, the end result manages to sound as though it's at the front of the sound stage, giving a good sense of focus. The ability of this mic to pick out detail also makes it useful on hand percussion: I tested the X1 on my darbuka, on which it performed extremely well, with a good balance of depth, attack and tonal detail.

Used with the Project Studio Reflexion Filter, vocal recording results were very little different to those that I've achieved using the original — and rather more costly — Reflexion Filter. In theory, the 'full-fat' Reflexion Filter should absorb more effectively at lower frequencies, due to its more sophisticated multi‑layer construction, but in practice, I found the subjective difference to be quite small.

Although not quite as refined‑sounding as a high‑ticket studio mic, I like SE's X1 mic for its lively, in‑your‑face character, which still manages to avoid sounding strident. This is also a good all‑rounder for the kind of acoustic instruments that you find in a typical home studio. It does have an in-built character, but for most applications it's one that won't get in the way of recording a polished sound, and in many situations it will help pull the sound forward in the mix. Although the mounting hardware for the Project Studio Reflexion Filter must be set up carefully to keep the mic stand balanced, the device itself works well.

In short, then, this bundle makes a lot of sense, offering an affordable but effective option for making good‑quality vocal recordings in a typical domestic space. To complete the starter setup, all you'll need is something to record onto (a computer and audio interface), some monitor speakers or good headphones, and a mic stand. For close miked vocals, podcasts and so on, you'll want a pop‑shield too, but most people will be able to add their own duvet! To sum up, this is a practical and good‑value set of tools for recording high‑quality vocals at home.

There are now several low cost 'me too' Reflexion Filter-type devices by companies such as Silent Peaks. On the mic front, the nearest competitors in both price and character are likely to be the Rode NT1A and the Audio‑Technica AT2020. It's also worth considering similarly priced mics from other manufacturers, including Studio Projects, AKG and MXL.

Both the items in this bundle can produce good results in their own right, but if you're in the market for a capable budget mic and also need a Reflexion Filter, buying the package makes a lot of sense.