As you'll have gathered from the name, the instruments in Soniccouture's latest offering derive their sound from the resonant properties of glass. Two come from the private collection of French musician Thomas Bloch, the third was lovingly constructed by the UK samplists themselves. 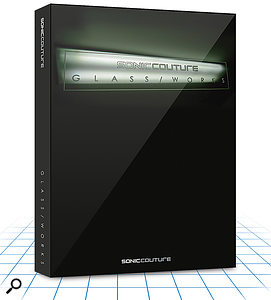 The design of the Glass Armonica dates from the 18th century, when it got mixed press: though some praised its 'angelic' sound, critics claimed it could cause nervous problems, domestic squabbles, premature deliveries, fatal disorders, riots and animal convulsions. (Didn't they say much the same about the Sex Pistols?) Such hysterical nonsense didn't stop Mozart and Beethoven writing for the instrument.

The Armonica consists of an interlocking set of glass bowls fixed to a central rotating rod. Played by touching the moving rims with wet fingers, its sound is pure, celestial, spooky yet uplifting, like high‑pitched crystalline voices from outer space. With samples chromatically mapped over four octaves, it sounds great playing complex chords (as it does in real life), but its lovely ethereal tone is equally effective when delivering a single melody line.

Thomas Bloch's Cristal Baschet would not look out of place in Superman's Fortress of Solitude ice cave: the business end is a four‑octave horizontal row of glass rods, each attached to a tuned block of metal via a vertical metal stem. This gleaming apparatus sits behind a tall flame‑shaped sheet of highly reflective metal and three loudspeaker‑like fibreglass cones, which add resonance and amplify the sound.

Intrigued? Wait till you hear it — rubbed with wet fingers, the glass rods' spectral tone is similar to the Glass Armonica, but the Cristal Baschet is lower‑pitched, with a breathy quality reminiscent of a pipe organ wooden-flute stop. In addition, the 'flame' resonator adds an amazing tambura/didgeridoo‑like grinding drone to loud bass notes. The metal blocks were also played percussively, creating a large array of reverberant sounds ranging from 'tuned hub cap' hits to nebulous prepared piano and waterphone‑like effects.

American composer Harry Partch (1901‑1974) was a leading light in experimental tuned percussion instrument‑building. Sixty years on, Soniccouture have recreated the design of Partch's Cloud Chamber Bowls, 14 large glass vessels (originally used in laboratories to track sub‑atomic particles) hung from a wooden frame. Played with hard mallets, they sound chippy and metallophone‑like; softer mallet hits resemble Tibetan bowls in the low register and reminded me of high‑pitched Javanese bonang pot gongs at the top end — a dreamy bell‑like timbre which imparts a magical chime to even the simplest of musical phrases.

Sounds of beauty and wonder, enhanced by lustrous cathedral reverbs, multiple round robins and a user‑friendly interface — inspirational for composers, perfect for out‑of‑this‑world soundtracks. Dave Stewart