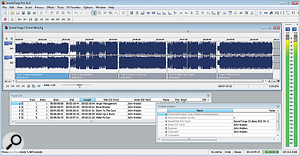 For a long time now, three packages have dominated the market for audio editing on the Windows platform: Adobe's Audition, Steinberg's Wavelab and Sony's Sound Forge. All provide excellent editing environments for mono, stereo or multi‑channel audio. Sony have now released version 10 of Sound Forge, adding 'Pro' to the title. What else has been added to tempt potential purchasers?

SOS has reviewed many previous incarnations of Sound Forge, most recently version 9 in the June 2007 issue (on‑line at /sos/jun07/articles/soundforge9.htm). If you are new to Sound Forge, the SOS web site review archive is the place to start, and I'll concentrate here upon the key new features introduced in this release.

In terms of core editing functionality and appearance, Sony have, thankfully, left well alone since version 9. At the time, Sound Forge 9 remained my weapon of choice for stereo editing, but when it came to CD compilation, I generally turned to Wavelab's Audio Montage options. Potentially, at least, this might now change, as the new release introduces Disc‑At‑Once CD burning: for me, at least, the clear highlight of version 10. As part of the set of tools that allows this to happen, Sony have also introduced what they term 'event editing', allowing multiple waveform 'events' to be placed within a single data window. Amongst the other new features, customisable window layouts and a number of new processing options also stand out.

It has always been possible to copy, cut and paste chunks of a waveform within a Sound Forge session, but event‑based editing makes that whole process much more flexible. A new Event tool

The new Event Tool (second from right) provides considerable extra functionality., with a waveform and pointing finger icon, allows you to create split points to divide your waveform into different sections (events), and to move these independently along the data window's timeline. Events can be made longer or shorter by dragging their boundaries, and they can also be overlapped, with crossfades automatically generated from a large number presets that would accommodate most situations. New events can be copied and pasted from other data windows, while complete files can be dragged and dropped from the Windows Explorer into an existing data window.

In short, the process is almost identical to working with similar audio events on an audio track in most modern DAWs, and the possible applications are similar. For example, when working with dialogue, you might simply wish to adjust the timing between individual phrases. With music, provided you can create suitably transparent edit points, you might use it to rearrange the verse/chorus structure of a stereo mix. It can, of course, also be used to arrange a series of individual songs into a CD‑like sequence, just like Wavelab's Audio Montage...

Sony have complemented the event‑based editing with additional tools for creating full CD projects and burning a Disc‑At‑Once CD (the existing Track‑At‑Once burning option is still available). There are a number of ways in which this can be approached, but the most straightforward is simply to arrange your individual tracks as events in the required running order within a data window. Each can be turned into a Sound Forge 'CD Track' using the Insert / CD Track menu option. This creates an additional lane beneath the waveform display called the CD layout bar. For each CD track, this shows the track name (which can be edited by double‑clicking) and track length. The latter automatically adjusts itself if you change the length of the track by dragging the start or end bars.

Tracks can, of course, be re-ordered by dragging and dropping within the CD layout bar. Track lengths can also be adjusted, although it is worth noting that CD track length and event length are not locked together, so adjusting one doesn't change the other. At first, this does seem a little strange, but it actually provides greater flexibility. For example, a CD track can be set to span two events to add a hidden 'bonus' track to the end of a CD project. Matching the ends of events and CD tracks to each other is made easier by the helpful way in which the end points 'snap' to each other while dragging. 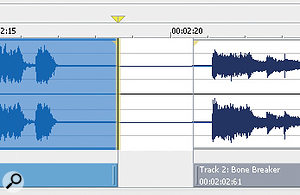 Lining up event and CD track boundaries, or setting the gap between CD tracks, is made easier by the way in which edges 'snap' when aligned (the edge glows yellow). There is also a snapping action as you adjust the length of silence between tracks, with the snap occurring when the default length (two seconds, although this can be changed) is reached.

As each event has its own volume curve, the overall volumes of tracks within the CD project can be matched as required to compensate for any differences in original mix levels. Each event can be processed individually via the options in the Process or Effects menus, while the usual Plug‑in Chainer can also be used to apply any global processing options.

Two further windows called Track List and CD Information allow key metadata to be added to the project for embedding as CD Text; usefully, this can also be exported in various formats, so it becomes easy to add to your favourite graphic design software and so on. And with all the editing done, the Tools / Burn Disc‑At‑Once Audio CD menu option will commit the final result to your CD burner in a very neat and efficient way.

As with any new release, a range of performance improvements have been made under the hood that are likely to be transparent to most users. However, there are other changes that include some reorganisation of the menu and toolbar structures: for example, the Acid Loop Creation Tools toolbar has disappeared and the buttons moved to other toolbars, while the Insert menu is new. Perhaps most significant is the ability to use and create customisable workspaces for particular tasks. These can easily be recalled via the View / Windows Layouts menu option. Again, the concept is similar to the 'screen set' features seen in many DAWs, and works well.

On the effects and processing front, the Izotope Mastering Effects Bundle, which was included with version 9, has now been expanded to include six plug‑ins: EQ, Reverb, Multi‑band Compressor, Limiter, Stereo Imager and Harmonic Exciter. 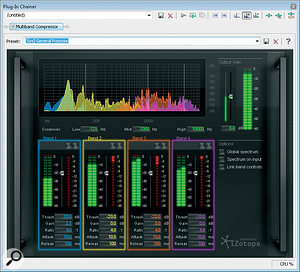 Multi‑band Compressor is just one of the six plug‑ins included in the Izotope Mastering Effects Bundle. While they typically offer slightly fewer controls than, and lack the all‑in‑one integration of, Izotope's flagship mastering plug‑in, Ozone, they are the same six building blocks that Ozone is made from. All are tailored to mastering, and so would work well as part of the overall CD production process. Equally useful, although perhaps a little more abstract for most users, are the included Izotope Sample Rate Convertor, which operates at 64‑bit for superior results, and MBIT+ dither processing, both of which can help keep audio quality intact when converting your material to a CD‑friendly, 16‑bit, 44.1kHz format. 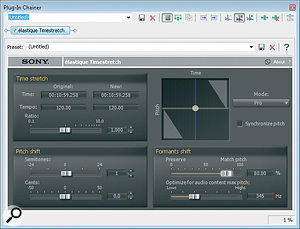 Space precludes a full consideration of all the new features but, for me at least, the headline offering — full CD production without leaving Sound Forge 10 — makes this a very worthwhile upgrade on its own. Sony have offered something that is different in approach to Wavelab's Audio Montage, and a key divergence is in how the two applications handle effects processing. While plug‑ins in Wavelab can be applied non‑destructively as insert effects, in Sound Forge, effects can be previewed but then need to be applied to a track or complete CD project. In practice, this is not a major issue and it certainly doesn't detract from the quality of the results. It does, however, require a somewhat different working approach, with the user likely to generate multiple instances of a Sound Forge 10 CD project, so that they can step back through their various processing options more easily.

For potential new purchasers, Sound Forge 10 and Wavelab 6 both offer fabulous PC‑based audio editing environments and, with the new event editing and Disc‑At‑Once CD burning, Sony have filled a gap in the Sound Forge feature set that might have been decisive for some users. Equally, while the price of Sound Forge Pro 10 is somewhat higher than for its previous version, it is still considerably cheaper than its most obvious competitor. Highly recommended.

Sound Forge Pro 10 provides an excellent audio editing environment for PC users, and the inclusion of Disc‑At‑Once CD burning for full CD project compilation has now filled what was the only significant gap in its feature set.