Homages to classic processors abound — but this one is much more than a simple clone... 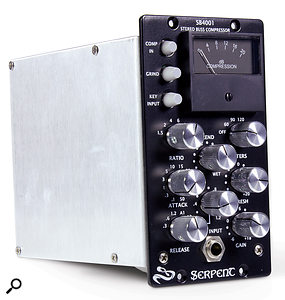 When a radical new song sparks new genre or sub-genre, it's all too easy to dismiss every track in the new genre that follows as a pale and lazy imititation, but while there are idle plagiarists out there, other artists will add something new, taking the idea in a different, hopefully worthwhile, direction.

Why am I going on about the relative merits of originality and plagiarism? Well, I can't help but think that the situation is similar when it comes to audio outboard gear. We've seen numerous clones of classic compressors in recent years, and one of the most frequently copied of such devices is SSL's revered VCA bus compressor. There are now more SSL-alike compressors in both software and hardware than I care to count — but while there are plenty that bring little new to the table other than a lower price, some manufacturers have attempted to improve on the original design.

Serpent Audio's SB4001 falls into this latter category. While it is unashamedly inspired by the SSL G-series bus compressor, it also provides new options for existing functions, and also adds new functionality. It's made only for the 500-series format, although a similar DIY option, the SB4000, is available as a 19-inch rackmountable project. The SB4001 is rather less expensive than the SSL equivalent, and is also less pricey than many other 'clones'.

Regular readers, then, will understand when I say that, in many respects, I find myself faced with the prospect of writing the same review I did back in SOS January 2012, when evaluating TK Audio's BC1 MkII (/sos/jan12/articles/tkaudio-bc1mkii.htm). Indeed, if you want to know a bit more about the SSL design in question, and some of the ways in which its imitators have tweaked the design, you could do worse than read that review.

Like the BC1 MkII, Serpent's SB4001 improves massively on the original design — but it goes a step further than the BC1 MkII in some areas, and presents the user with different options in others, albeit for a slightly higher price here in the UK, particularly if you add in the cost of 500-series rack, to make the two truly comparable.

While almost all of the controls and options available on the SSL design are present and correct in the SB4001, there are others available too. For starters, the user is given much more control over attack and release settings. There are 12 attack-time options (0.1, 0.3, 1, 3, 5, 10, 15, 20, 25, 30, 40 and 50 milliseconds) and not only are there five fixed release-time options (0.3, 0.6 and 1.2 seconds, and two programme-dependent auto-release settings), but there's also one more step on the switch, labelled 'VAR', which switches control of the release time to a variable pot, allowing you to precisely match the release time to your track's groove and tempo, at anywhere from a super-fast 0.1 seconds to a relatively sluggish 1.2.

The ratio control differs from the SSL blueprint, with 1.5:1, 2:1, 4:1, 6:1, 8:1 and 10:1 on offer. I've rarely seen fit to use high ratios on SSL-style VCA compressors, as the sound can seem so aggressive, so the 1.5 option (as on the BC1 MkII) is welcome. However, there's also a Blend control, for instant parallel compression in the analogue domain — without any delays or phase issues — which makes those higher ratios much more useful. There's more to parallel compression than simply 'backing off' the savagery a bit: read Hugh Robjohns' technical explanation of parallel compression in last month's SOS if you want to find out exactly what this technique does to your audio signals.

There's even space on the double-width front panel for a fairly generously sized gain-reduction meter, a side-chain high-pass filter, and an external side-chain input jack. The last of these affords the user absolute control over the side-chain signal, whether that be simply so that you can duck or key one source with another, or so you can feed in a precisely EQ'ed version of the signal to be processed, to skew the compressor's sensitivity to different parts of the material in a way you can't quite achieve with the built-in filters.

Serpent have managed to fit all this in without overcrowding the front panel, which is no mean feat in any 500-series device, even a double-width one such as this. Everything is neatly laid out and easy to read, and the controls and build in general feel reassuringly solid.

On the inside, the main gain-reduction circuitry adheres to a pretty tried and tested design, with a number of THAT 2181 VCA chips taking care of side-chain and gain-reduction duties. These (along with the pre-trimmed 2180 variant) are the most popular option for SSL G-series clones, whether commercial or DIY, and do an admirable job of emulating the Dbx 202 discrete VCA used on the original. Where some clones use only three such chips, though, the Serpent design employs nine — one in the side-chain circuitry, like most designs, and four in each channel, in the Dbx 202-emulation circuitry. Running four VCA chips in parallel in this way pushes down the noise floor — in other words, the signal-to-noise ratio is increased, which means that the compressor can accommodate signals with a greater dynamic range. Theoretically, it's possible to keep improving the performance in this way, although the next step would be to double the four to eight, eight to 16 and so on... which would not only become expensive and raise the usual question of diminishing returns, but could also be problematic in terms of available space in this format.

Snake On A Bus

I have to say that the SB4001 was a joy to use, and that it will continue to be so: there's no way I'm letting this unit go back to the manufacturer! Not only is it easy to use, but it sounds very good too. While I've always liked the action of the SSL bus compressor, I've often found it rather restricting, particularly in terms of the available ratios, as I mentioned earlier — the lowest ratio on the original G-series compressor being 2:1. On the SB4001, you have the option of going as low as 1.5:1, which makes it rather more versatile for subtler compression jobs. But when you want a bit more muscle, the Blend control makes light work of parallel compression, to leave you with a sound in which low-level details are brought up with ease on a drum bus or a full mix, without raising the noise floor, and without squeezing all the life out of a signal.

As well as being able to provide the much-discussed 'glue' that can help a mix gel nicely, the SB4001 is capable of creating more aggressive sounds, but in a way that never sounds unpleasantly harsh. In part, this is down to the presence of those side-chain high-pass filters. As well as simply making the compressor less sensitive to the bass, with a couple of different turnover frequencies to choose from, they offer one or two more interesting options. 'Boost' is dual-shelving EQ, boosting the high frequencies and attenuating the low end from 60Hz. Slope is similar, but without the low-end shenanigans, resulting in slightly less compression being triggered by mid-range frequencies.

One thing I didn't mention in the overview of controls above was the 'Grind' control, which introduces what Serpent describe as a tube-style harmonic overdrive. In layperson's terms, what this translates to is the addition of some pleasing dirt on the output, after the wet and dry parts of the signal have been summed. Boost the input level for more of this effect. It's not so bold as to be noticeable on all sources, but listen carefully to that drum bus and you can hear a certain solidity added to the snare and kick, and a little more definition higher up the frequency spectrum. Although it's subtle, you won't want to use this on everything, but if the SSL G-series sounds a bit 'poppy' or 'clinical' to you, I suspect you'll be pleased to have this alternative voicing available. And if it's not to your taste, you don't have to use it!

During my tests, I pitted the SB4001 against some hardware VCA compressors, including my own GSSL DIY build (another THAT 2181-based VCA design) as well as a number of plug-in emulations of SSL hardware compressors from Waves, UA, SSL and a number of others, using it on a drum bus and on a range of stereo programme material. Actually, the software emulations of transformerless VCA compressors like this tend to be closer to the real thing than do those of more vintage-sounding transformer- and tube-laden processors. In fact, in small-scale double-blind tests, asking people to pick out their favourite result, the plug-ins tend to fare as well as any hardware. However, I feel that's something of a false result, because it is so dependent on what the person wielding the controls intended to achieve. In all cases, I found the hardware easier and quicker to deploy, and to my ears the best sound came from the SB4001, it being somehow cleaner and snappier than my GSSL.

There are inevitably a few issues to weigh up when choosing a bus compressor, including what material you'll use it with, the price, and the desired functionality. The SB4001, though, really is a worthwhile addition to the bus compressor and 500-series categories — and I have no hesitation in recommending it to anyone. Even when you add in the price of a small 500-series rack to provide this module with power and I/O, the price is very much lower than that of the SSL equivalent, not to mention that of many broadly comparable imitators. If I were being extremely picky, I might suggest that in a future revision the external side-chain input could be doubled to appear on the Omniport of Radial's Workhorse series racks — but even more picky people than I wouldn't see the absence of this as a problem. In short, then, this processor is so well thought out and — for my own needs, at least — so perfectly executed that I have absolutely no qualms about endorsing it. I can't wait to try out their Splice 1176-inspired compressor, which was announced just as I was writing this!

As discussed in the main part of this review, the world isn't short of bus compressors inspired by the SSL G-series model. Alternatives obviously include SSL's own current offerings, but although the quality remains high, the company haven't implemented any of the functional enhancements other manufacturers have brought to the table. Perhaps the closest point of comparison is the Dramastic Obsidian 500. This is similar in ethos to the SB4001, and brings transformer balancing to the party, but it lacks some SB4001 features, such as the variable release. In rackmount form, the strongest competitors in terms of price are the TK Audio BC1 MkII and Chameleon Labs 7720, both of which are more affordable, but neither of which offers the range of facilities that is found in the SB4001. Those on a tighter budget who possess soldering skills and basic electronics knowledge could also consider the Gyraf-designed GSSL and IJ Research MixBuzz 500 DIY builds.

The Serpent Audio SB4001 takes the G-series bus compressor concept and builds on it in a really useful way, making this an attractive purchase for anyone with a 500-series rack and a desire for SSL-style bus compression.