In years gone by, if you wanted to make orchestral music you would first have had to hire a classically trained pro to develop an arrangement, and then remortgage the house to pay for a studio and musicians. Sonokinetic's Da Capo — a sibling of the Tutti and Vivace Cinematic Orchestral FX & Textures sample libraries — provides not only the raw instrument samples, but also a sophisticated interface with which to control them, so that even novices armed with little more than a controller keyboard and a copy of NI's Kontakt can have a stab at orchestration. 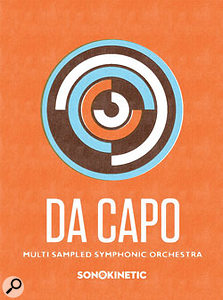 Once the library is downloaded — which, at almost 8GB, takes a while — five kit types can be selected from within Kontakt. The first on the list, All Sections, loads up the whole orchestra so that its sections (brass, strings, woodwind and percussion) become assigned to the keys of the virtual keyboard and/or hardware MIDI controller. The remaining four kits are entitled Brass, Percussion, Strings and Woodwind.

The custom interface is simple, striking and strange! Five Dutch-orange stripes dominate the display, looking like a pipe organ diagram might if it were designed by Adidas. There's no pipe organ, however, and the stripes are simply decoration for a small number of buttons and level controls. The design functions pretty efficiently for the simpler kits, but is unable to accommodate the All Sections kit's pages in one view, so the user has to hop to the home page and then off to each section to make adjustments.

When making the original recordings, the producers used four different microphone positions, and these setups are presented as options in the interface. Consequently, every kit has Close, Decca, Wide, and Balcony buttons that can be turned on and off independently of one another, and the level of each mic feed is balanced using dedicated sliders. The only limitation is that mic changes are global within a kit, so what's done to brass, for example, also applies to strings, percussion and woodwind. The workaround is to set alternate configurations in another instance of Da Capo.

Decca is arguably the best all-rounder and sounds particularly good when a portion of the Close mic feed is mixed with it. The Wide feed dramatically expands the stereo spread of instruments, while Balcony delivers a big and dramatic sound picture. Mixing these mic options is the most direct method of altering the orchestral sound and is very effective.

The final room-sound altering tool is a reverb, based on Kontakt's own convolution plug-in, for which Sonokinetic have made custom impulse response recordings and created controls that match the rest of the interface. Given that the Wide and Balcony options create a massive sound, the reverb is more of a luxury than a necessity and can easily feel like a bit too much.

Although the level and position of specific instruments can't be adjusted in Da Capo, each section is split into editable chunks. In Strings, for example, there are four buttons representing low, low-mid, high-mid and high instruments/keyboard zones, and the level and pan positions of each are fully controllable. Brass and Woodwind are similarly endowed, except that they have just three divisions.

Selecting a division or zone makes it active so that instrument articulations can be assigned to it. The strings are the best equipped in the articulation department, and offer Stac (staccato), Marc (marcato), Pizz (pizzicato), Sus (sustain) and Leg (legato) options.

Sustain and legato can be used together, but the Stac, Marc and Pizz buttons automatically turn the others off when they are selected. The Sus and Leg combination can also be used for the Brass and Woodwinds kits, but the former has no pizzicato option and the latter misses both pizzicato and marcato.

Things get far more complicated when the All Sections kit is in action, as it enables articulations to be 'stacked' and, in truth, it is hard to keep track of what articulations are being used by the various sections and sub-divisions. I also noticed one or two minor bugs that occasionally caused certain zones to fall silent, but Sonokinetic are conscientious when it comes to releasing updates, so such hiccups should be ironed out quickly. Even during the course of the review, I was sent version 1.2, which introduced 'lite' kits plus a new short-articulation velocity slider (short articulations include staccato, marcato, pizzicato and all percussion instruments). Pulling the slider from left to right progressively shifts articulation control from key velocity to the mod wheel, so there is the option of working with just one tool, or a custom mix of the two. Sustain and legato were already mapped to the mod wheel and remain so.

Other notable features include the option of switching from 440 to 442 Hz tuning with one click of a button, and a set of Bartok Pizzicato samples.

Compared to Sonokinetic's Tutti and Vivace libraries, which were recorded in the same hall by the same orchestra, Da Capo is much more of an 'instrument'. In fact, the samples from which it is built are not intended to be used in isolation at all. This product is really for composers who want to play a sizeable orchestra like a synth patch, and have little interest in writing for individual instruments.

The sound is excellent, as one would expect, given Da Capo's price, and seems to have a little more bite and depth than the typical 'Hollywood' sound. The brass, in particular, has a wonderfully forceful timbre that is very compelling. Apparently, the samples were not cleaned up, and if that is the reason for their sound quality, it was a great decision. The minor flaws in the design are certainly not deal-breakers and only slightly detract from what is generally a very easy-to-use product that will undoubtedly prove to be very successful. Tom Flint