Shure's assault on the headphone market continues, as they follow up their closed-back models with this flagship open-back design. 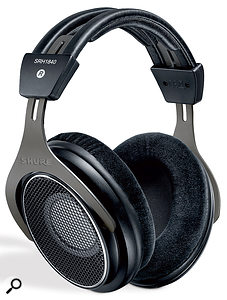 In recent years, microphone giants Shure have been building up their range of high-quality headphones. In October last year, we reviewed their impressive top-of-the-range closed-back model, the SRH940. This and its siblings have now been joined by two open-back designs, the SRH1440 and the SRH1840, the latter of which is reviewed here.

The SRH1840s are the most costly 'phones in Shure's range, with a price tag considerably higher than AKG's K702, Beyer's DT990 or Sennheiser's HD650, though they are more affordable than Sennheiser's flagship HD800. Given that you could get a fairly decent pair of studio monitors at this price, does their quality justify the outlay?

Shure's packaging is certainly designed to give an impression of opulence. The SRH1840s come in a vast, monolithic, black cardboard box, which houses a smart, padded, semi-hard carrying case, along with a spare cable and set of earcups. The cables simply snap into place at the bottom of the earcups, and a firm tug will dislodge them, which should help to prevent disaster when you forget you're wearing them and set off across the studio.

The phones themselves are impressively lightweight and seem robust in design. I found them comfortable to wear for long periods, although, like the SRH940s, they had a slight tendency to load what little weight they have on the very top of my head.

With an impedance specified at 65Ω, the SRH1840s are easier to drive than some open-back designs. I also found that, despite being open-back, they were surprisingly innocent regarding noise pollution: I spent a couple of weeks listening to music at a comfortable volume in the SOS office, and no-one complained.

The Best Of Both Worlds

The closed-back Shure headphones I've tried have all shared a fairly distinctive tonality, which tends to push forward the mid-range at the expense of the bass. The SRH1840s are completely different animals, with a frequency response that comes across as commendably natural and unhyped. I would describe them as 'neutral', but that makes them sound as if they should be sterile or boring, which they certainly are not.

The bass is solid, well-defined, fast, and nicely integrated with the rest of the sound. The mid-range is detailed and rich without being overstated, and high-frequency extension seems excellent, as is the presentation of transients. Perhaps because they use closely matched drivers, stereo imaging is also as good as I've heard from any set of headphones.

In other words, these headphones combine all the qualities you'd look for in a tool for analytical listening or mixing, but what's most impressive about them is that they still present music in a fashion that's, well, musical. There's nothing dry or clinical about their sound, and whether it's the rawness of a rock mix, the delicacy of a piano sonata or the excitement of a dance track, the SRH1840s never failed to put across the vital qualities of a recording. They show above all that accuracy need not come at the expense of listening pleasure.

One of the problems of mixing on lesser headphones is that it can be hard to identify the point where a phenomenon such as sibilance becomes a problem. Some headphones have you reaching for the de-esser whatever the singer and whatever the mic, but with the SRH1840s, I never found myself trying to solve issues that weren't really there.

When I compared the SRH1840s with a pair of Sennheiser HD650s (I've never had the pleasure of trying the HD800s), the differences were most obvious at the low end: the Sennheisers had more bass, but sounded quite bloated and woolly by comparison. Several times I found myself hearing individual sounds within a dense mix for the first time on the Shures; when I went back to other phones, I could hear them, but I'd never have noticed them in the first place without the impressive clarity of the SRH1840s.

It's true that they are not cheap, but I can honestly say that the SRH1840s put into shade all of the other headphones I've ever tried, and I would be happier mixing on these than on budget active monitors. It's a big investment, but I have bought a pair for my own use — knowing that if I didn't, I'd always be dogged by the feeling that something was vaguely unsatisfactory about my existing phones! If you're in the market for a really good pair of headphones, these absolutely must go on your list to try out.

Shure's flagship open-back 'phones achieve the rare feat of being both accurate and musical, and I don't want to give them back!