This vintage‑styled mic is designed especially for recording electric guitar. Does it sound as classy as it looks? 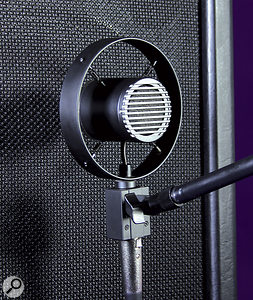 Sontronics' Trevor Coley always manages to come up with something a little different in his mic designs, both visually and conceptually. The latest addition to the Sontronics catalogue is the Halo, a cardioid‑pattern dynamic microphone designed specifically for use on guitar amps and cabinets. It's no SM57 lookalike, however — nor a soundalike, for that matter. The mic assembly is a stubby, barrel‑like affair suspended via four springs within a circular frame (the halo) that offers some measure of low-frequency isolation from stage‑borne vibrations when used live.

The capsule is actually based on that of the Sontronics STC80 hand‑held dynamic model, but with some tweaks to the frequency response to allow it to emphasise the bite of an overdriven guitar. According to Sontronics, the aim was to get close to the sound you need in a mix without having to use EQ. The mic's frequency-response curve shows it to have a generally hump‑shaped response rolling off above 10kHz and below 100Hz, with the ‑3dB points being at 50Hz and 15kHz. However, the mid‑range hump rises to around +5dB at around 4kHz, and is so broad that there's nowhere on the response curve that you could lay a ruler: this is most definitely a mic designed to achieve a specific sound rather than being tonally neutral. Its sensitivity is rated as ‑53dB (±2dB), but then high sensitivity is never going to be an issue for a mic sitting in front of a guitar combo or stack. My tests showed the output to be comparable with that of other dynamic mics. No maximum SPL figure is quoted, but I never had any problems, even when sticking the Halo very close to the speaker grille of my 120 Watt Vox combo. 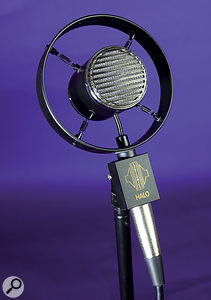 The body of the Halo is suspended by four springs in the middle of a metal hoop.

The sound of this mic is certainly biting and edgy. It seemed noticeably brighter than the sound heard from my amp out in the room, even when positioned off axis, so some EQ cut may be beneficial if you're not trying for a hard‑edged rock tone. Alternatively, you can modify your amp settings until the sound coming over the monitors is to your liking. This slightly strident character is typical of dynamic mics, and it could be argued that it has become part of the accepted recorded guitar sound; an SM57 also pushes the upper-mids, though not in such an obvious way as the Halo.

While reviewing this mic, I took the opportunity to record a couple of solos on a track I'd been working on, putting my Audio Technica AT4050 capacitor mic about 800mm from the speaker and the Halo fairly close to the grille (150mm or so). This was interesting from a comparison point of view, as the AT4050 came much closer to capturing the sound of the amp as I heard it out in the room, but using both mics together, panned slightly left and right to give a pseudo‑stereo sound, worked really nicely, with the bite of the Halo complementing the warmer sound of the more distant AT4050.

Price‑wise, the Halo is in the same ball-park as Shure's venerable SM57. It certainly scores on individuality, though the tonal aspect will always be subjective. In my view, the Halo delivers the best tonal balance when used close to the speaker grille, as that gets the proximity effect on your side to beef up the lows, but you soon lose that as you move the mic back, in which case you may need help of EQ to stop the tone becoming thin and reedy. The Halo excels at nasal‑sounding metal tones or bright, stabby clean sounds. My tests revealed it to have more edge and noticeably less low‑end warmth than my old SM57, with both set up at 150mm from the speaker, around 50mm from the edge of the cone. Its forward character can be tamed easily, using a touch of 2kHz cut, but the low end still sounds very different.

There's plenty of flexibility on offer, especially when you consider how much difference the mic position also makes, but to sum up the mic's character in a single word, I'd have to say 'assertive': it is better suited to more aggressive rock styles than to classic rock and blues.

While there are many dynamic microphones that will work well on guitar amps, this one is realistically priced, it gets the job done, and it looks pretty cool into the bargain. It's well worth giving it a try if your recorded guitar sound lacks edge.

There are many dynamic mics that can be used for recording electric guitar, though the Shure SM57 is probably the best known in this price range. As an experiment I compared the Halo with a Prodipe TT1 and the SM57. You can hear the audio files at /sos/jul12/articles/sontronics-halo-media.htm.

Sontronics have come up with yet another distinctive microphone. This model seems best suited to hard‑edged rock guitar sounds, but can be adapted to other styles by adjusting the mic position and/or applying EQ.