'Complete Classical Collection' is quite a claim. Can orchestral sampling pioneer Peter Siedlaczek's latest library make good on it? 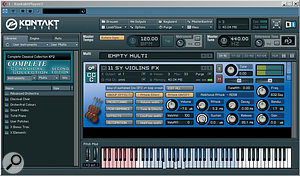 Peter Siedlaczek is probably best known for his Advanced Orchestra library which, when originally released, represented one of the most sophisticated and comprehensive orchestral sample libraries available. The five CD‑ROM sample set was given a glowing review by Paul Farrer in the May 1997 issue of SOS. Sampler technology and orchestral sample libraries have, of course, moved on considerably since then, with products ranging from the excellent Garritan Personal Orchestra (costing about £100$200 and 2GB in size) through to the likes of the Vienna Symphonic Library Cube (at a tad under £3000tad over $5000 and over 500GB) now available. Peter Siedlaczek's latest offering presents a number of his previous libraries in a single package — the Complete Classical Collection — and, while priced closer to the GPO end of the market, at over 11 gigabytes it certainly packs a decent punch. So is CCC a good starting point for classical composers on a tight budget?

Essentially, CCC bundles updated versions of Advanced Orchestra, Classical Choir, Orchestral Colours, Smart Violins (itself reviewed in the April 2001 issue of SOS) and Total Piano into one package and throws in a few extras for good measure. Some of these updates have been made to take advantage of the functionality offered by Native Instruments' Kontakt 2 Player, which forms the front end for CCC.

Kontakt has, of course, been reviewed before in SOS — both in its full version (see the January 2008 issue) and the more streamlined 'player' version appearing here. There is, therefore, little new to say other than to reiterate that Kontakt Player 2 is, in a nutshell, an excellent means by which to exploit the samples within CCC.

It is not absolutely clear from the documentation whether the samples included here are identical to those used in the original AO library. If they are, then all I can say is that, 10 years down the line, they still sound pretty good. This part of the package is divided into strings, brass, woodwind, percussion and harp sections, with a number of further groups offering instrument combinations or 'lite' versions of single instruments. Both solo and ensemble instruments are provided in the string, brass and woodwind sections and, as with most orchestral libraries, different performance articulations are accessible via keyswitches. Kontakt's instrument display includes an info bar that shows which articulation is currently selected — which is very useful.

While you don't get the array of articulations that you might find in some of the more up-market orchestral libraries, all the key performance options — for example, sustained, staccato (soft and hard), swells, tremolo, trill and pizzicato for the strings — are represented. The ensemble strings are perhaps stronger than the solo varieties but the rest of the material — woodwinds, brass, harp and percussion ­— is really very good. Also programmed into the Kontakt front end are the very useful 'attack' and 'legato' options for improved playability. The former allows a separate attack sample to be blended with a sustained sample, and this can give very useful control over playing dynamics.

The Speed control allows the tempo of the phrase‑based patches to be matched to the host project.

The Classical Choirs section provides a selection of the usual vowel and phonetic sounds, programs that use the mod wheel to blend between these different sounds, and some special effects. Whether you require some gentle vocal pads (with which you can use the mod wheel programs to create a nice sense of movement) or more demonic staccato hits, there are programs to suit. While this collection would certainly not compete with the likes of EWQL's Symphonic Choirs in terms of its versatility, it would be a significant step up from the generic 'choir' patches found on most workstation synths, as the basic quality of the sounds is very good indeed.

As a separate sample library, Orchestral Colours was first reviewed in SOS back in February 1995, and was one of the first such libraries to offer pre-arranged orchestral soundbites. These can be thought of almost as orchestral one‑shots: various runs, hits and phrases that either use the whole orchestral palette or just a couple of sections combined. The various samples are provided in a range of keys, for extra flexibility, and many of the phrases have a Speed control that allows the tempo of the phrase to be adjusted.

There is some excellent material in this section of CCC, but the various 'hits and finales' are probably the pick of the bunch. While you are obviously dependent upon the selection provided, they are very useable and some, such as the Glissando Hits FX or Brass and Hit FX patches, also provide a way of building your own 'big finish'.

Smart Violins takes the phrase concept a stage further for the violin ensemble. A large collection of note runs and phrases are supplied in three different tempos — 140, 120 and 100 bpm — and in all keys. Again, the material is good and, if you can find a phrase or phrases that suit your mood, the end result is invariably more realistic than trying to play your own, especially for more rapid runs. Layering different phrases together can also be effective.

If you do need to add a little further variety, a small selection of sampled violin ensemble instruments is also included, each one with a number of key-switch articulation options. As with the Orchestral Colours section, the majority of the phrases also feature the Speed control, so the tempo can be adjusted to match your project.

The two main programs within the Total Piano section are a Bösendorfer classical piano and a generic 'pop' piano. Both are perfectly useable, but not in the same league as something like the Synthogy Ivory Grand Pianos as serious solo pianos. This section also contains a large number of processed and special-effect style piano sounds. There are a few goodies amongst this lot, including the Magic Drums patch, which has a rather nice, hollow, wooden sound. A bright‑sounding 'tack' piano patch is also provided.

Amongst the 'extra' elements is a rather mixed bag of instruments, sound effects, additional orchestral phrases, and even some synth‑based sounds. The instruments include a couple of useful church organs, a gong, a harpsichord, and various bits and pieces of percussion. The synth material is mainly based on pad and atmospheric sounds, and would be useful for film or TV applications, where it is not uncommon to layer a drone or pad sound beneath more traditional orchestral elements. The selection here I would say is useful without being a high point of the overall collection.

So is the Complete Classical Collection a comprehensive orchestral solution for aspiring composers? Well, it certainly covers a lot of ground and, at its heart, is a very respectable palette of orchestral sounds. All the key instrument types are covered, and it provides enough performance options to produce some very good orchestral mock‑ups. While there is not the level of detail that might be squeezed out of some of the more expensive orchestral libraries, CCC will neither break the bank nor cripple your host computer.

If you are in the market for an all‑round orchestral library but are on a tight budget, Complete Classical Collection II would be well worth considering alongside the obvious competition, such as Garritan Personal Orchestra. While CCC is a little more expensive, the additional elements, such as the extensive collection of one‑shot phrases and choir samples, certainly make it excellent value for money.

At this price point, Garritan Personal Orchestra is an obvious competitor to CCC. However, GPO doesn't really include the range of loop and phrase options included in CCC. If you want a collection of such phrases, Sony's excellent Orchestral Series, aimed at Acid users but equally at home in other loop‑friendly hosts, is a good starting point.

Best Service have also recently released a second edition of Peter Siedlaczek's String Essentials (priced at £295$395). The original release was given a very favourable review in the July 2006 SOS by Dave Stewart. String Essentials offers 17GB of material and concentrates on more detailed sample programs. The second edition has been updated to better exploit Kontakt's features, and a new set of 'Advanced Legato' patches is included for smoother legato-style lines. The standard of the sounds is uniformly high, and this library certainly stands comparison with other dedicated string libraries in a similar price bracket.

The Complete Classical Collection would make an excellent starting point for budding composers and offers very good value for money.