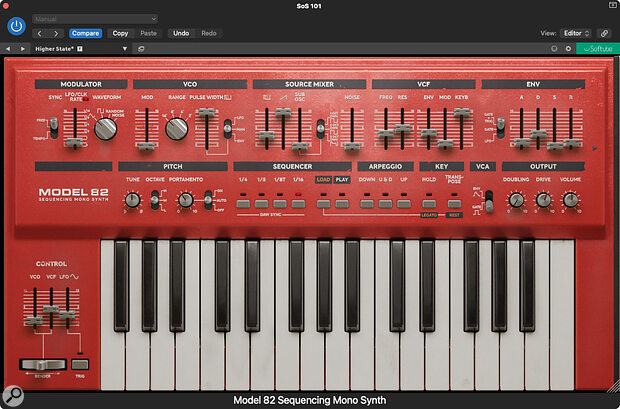 The humble Roland SH‑101; initially shunned by the more established synth generation, but quickly popularised thanks to its nose‑diving secondhand price during the late‑’80s. It was always a little bit... well, plasticky, but it captured the creative imagination of a generation, thanks to its pseudo‑303 sonic tendencies and simple signal flow.

Softube have an enviable reputation for the recreation of vintage classics in software, both synthesizers and effects plug‑ins — their recent Minimoog and Juno emulations, for example, have garnered high praise. Their ethos for capturing the essence of the original begins with the plug‑in window and GUI. Model 82 appears in a more‑white‑than‑grey hue, with a hint of a battering, presumably due to some virtual gig or another! If the off‑white doesn’t tick your box, you have the option to switch to blue or red, and before you ask, they all sound the same!

As a seasoned 101 owner myself, the level of familiarity provided by the plug‑in’s GUI layout is both extensive and endearing. The Source Mixer is where it all begins, with the volume faders for sawtooth, square/pulse, sub‑oscillator and white noise, which in turn feed the 24dB/octave resonant low‑pass filter. In audible tests, these initial components are pretty indistinguishable from the original machine, all bar one small detail: the original 101 was always a little lightweight in the low‑frequency bands, and Softube have clearly made the decision to make the Model 82 a shade more beefy in the bottom end. There is real depth to the sound, and it somehow feels exactly the same, only more gratifying and contemporary. Of course, if you want that slightly lighter sound, it’s only an EQ curve away (the 101 never benefited from a high‑pass filter).

Keeping things pure, Softube have maintained the single ADSR envelope, where other plug‑ins, notably the Roland 101 plug‑in, have opted to offer two. With my purist hat on, I like Softube’s approach here, because the use of only one envelope alongside the option to gate the VCA often brightens the sound, as the filter and VCA release phases co‑exist to create interesting back‑end decay and colour.

You have to applaud Softube for striking such a find balance between reverence for the original and subtle developments that enhance its performance.

Amongst the characteristic charm, there are a number of really helpful additions to the plug‑in. The 101 sequencer has become lodged in the synth vernacular as a byword for an easy‑to‑input step‑based sequencer, which is an ethos continued here. Simply press Load and input your notes or rests, and your sequence will be ready to perform upon the pressing of the Play button. Without the gate and clock inputs of the original, Model 82’s sequencer locks immediately to your DAW, with four buttons allowing selection of note/step value. The same goes for the arpeggiator, which also works in the standard 101 mode.

The VCA output is expanded by two effects. An Overdrive adds plenty of fuzzy colour to the upper frequency bands, which is predictably effective when applied to a resonant signal. It smacks of classic 101/303, sounding incredibly appealing. Meanwhile, a doubling feature induces a useful spacial effect, providing a sense of mirrored, but marginally delayed, signals across the left and right outputs.

Hidden away, behind an arrow on the right of the GUI, faders allow velocity and aftertouch to modulate either the VCA or filter cutoff. This is also where you’ll find the colour palette switch to select between grey, red and blue.

These additional elements don’t really detract from the original. They are there if you want them, although a quick meander through the collection of included presets will present relatively extensive use of these newly included features.

You have to applaud Softube for striking such a fine balance between reverence for the original and subtle developments that enhance its performance. It’s a beautiful user experience, and certainly in musical contexts, stacks up very well against the original. In fact, I would suggest that it’s far more production‑ready, thanks to its greater low‑end depth and weight and new facilities, without any ounce of disrespect to the original, which has always been a firm favourite. Given the price, it’s difficult to ignore the temptation of that Roland sound.

Model 82 provides all the benefits and charm of the original 101, with a sonic signature that can add mass and gravitas to contemporary and retro productions.