Sonnox are the latest manufacturer to apply some new thinking to the humble de–esser. 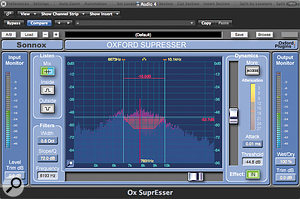 A de–esser is, at heart, a specialised compressor that reduces the level of part or all of the audio signal when a sibilant high–frequency event, such as an excessively pronounced 'S' or 'T' sound, is detected. Those that reduce the level of the whole signal can make vocalists sound as though they are lisping, so the more elegant de–essers act either on frequencies above a certain crossover point, or on a restricted band of frequencies corresponding to the part of the audio spectrum where sibilance occurs.

The Sonnox Oxford SuprEsser is available in native formats across both Mac and PC platforms to support RTAS, AU and VST–compatible hosts. It is a very sophisticated de–esser based on a frequency–specific compressor that targets only that part of the spectrum where problems occur, and is adjustable to cope not only with vocals but also the unwanted whistles associated with some types of wind instrument. It can also be applied to removing low–frequency thumps from improperly recorded vocal parts, and some users have found applications for it as a general–purpose dynamic equaliser.

Operation is simplified by a very slick graphical display, which makes it easy to pinpoint frequencies that need treatment. A red vertical pointer continually follows that part of the spectrum where the energy is highest. The threshold level level of the adjustable processing band is shown alongside an FFT display of the frequency band of interest, which has a peak-hold facility to make troublesome sounds more visible, and when gain reduction is applied, the spectral change is shown in red.

Apparently, the gain control element of the SuprEsser is a modified version of the compressor section of the Oxford Dynamics plug–in, teamed with a pair of linear–phase crossover filters, so that the compressor acts only on frequencies in the range that needs treatment and applies gain reduction via a tuneable band–reject filter. Three listen modes allow the user to listen to the mix, the output of the band–pass filter alone, or the output of the band–reject filter alone, and once the frequency band has been located, lowering the threshold fader controls the level at which the gain reduction process is active. Once this is done, the plug–in has an Auto Level Tracking mode that very cleverly tracks the signal level and adjusts the threshold accordingly, so the same amount of gain reduction is applied to sibilant sounds regardless of the signal level. This is useful if the vocals get a lot louder in the choruses than in the verse, for example, and means that the SuprEsser can be used prior to a conventional compressor in the signal chain.

In other words, the crossover filters divide the input into a signal path containing just the contents of the sibilant band and another signal path comprising the input signal with this band removed. When they are mixed back together, the original signal is recreated, but when the compressor reacts to the signal in the band–pass detector filter, the sibilant band contribution to the output is ducked in level. The band-pass/band–reject filters switch EQ type automatically between four modes to maintain an optimum response at different width settings, and this happens quite transparently without concerning the user. There's also a wet/dry Mix control similar to those used in parallel compression, so that some of the untreated signal can be added back in, and for more of an old–school effect, there's a Wide mode to allow full–band compression when sibilants are detected. It is also possible to have the gain reduction applied to a user–defined mix of broadband and frequency–specific components, so that the whole signal is compressed to some extent but the sibilant region is ducked more.

The use of linear–phase filters means that there's a significant processing delay; the filter 'kernel' size can be reduced to vary the latency, but in most instances you're better off using the large kernel size and living with the extra latency, especially if treating low–frequency pops and thumps. As most host DAWs look at the plug–in's delay when it is inserted, Sonnox have opted to provide the plug–in in three separate kernel–size versions to avoid the problems that would occur if the kernel size were to be adjusted dynamically during use. Depending on your audio buffer size, the delay for the large–kernel version will be somewhere in the region of 4116 to 12308 samples.

The user can access an easy or advanced interface view showing extra parameters, but in both cases the plug–in has input meters on the left and output meters on the right, with the frequency display taking up most of the centre of the window. Vertical lines show the boundaries of the processing band. There's an input gain trim, access to the three listen modes to aid setting up, and a Mix button that defaults to an equal mix of band–reject signal and compressed band-pass signal at the output, which means the normal spectral balance is restored except when de–essing is taking place.

The Frequency fader and Octave controls adjust the centre frequency and bandwidth of the band–pass and band–reject filters. They cover a 20Hz to 20kHz range, so you really can target any part of the audio spectrum, and a Slope setting determines how steep the filters are, allowing the boundaries of the treated band to be anything from gentle hills to almost vertical drops.

Threshold is displayed as a line on the graph and, once set, will vary automatically as the level of the audio signal changes. Attack controls the reaction time of the compressor when a sibilant event is detected, and an attenuation meter shows the amount of gain reduction; the peak-hold facility mentioned earlier shows the maximum gain reduction for the preceding two seconds or so. Output gain may also be adjusted, and dithering is apparently applied after the output gain control.

Those who feel more adventurous can press the Access button to get to the Oxford SuprEsser's complete set of advanced dynamics controls, at which point the GUI changes to display rather more controls than you need for basic de–essing. You can, for example, choose a fixed rather than dynamic threshold, or adjust the compressor time constants and ratio.

The SuprEsser's display is the best I've seen on a de–esser, and reveals exactly what is going on. For me, the way the display shows which frequency band is being de–essed and by how much is a major part of this plug–in, as it makes using it very simple. Though there are lots of controls, basic operation is straightforward, and grabbing and dragging parameters in the display usually reveals an intuitive shortcut.

What's more, the quality of de–essing is as good as it gets. As long as you keep the band being processed as narrow as possible, even large amounts of gain reduction on sibilant sounds fail to produce lisping artifacts, and this was the case during the review period even with sections of test speech that had been purposely recorded to sound extremely sibilant. The additional Advanced parameters may be useful for slightly less routine jobs and for more general dynamic EQ operations, but for de–essing I found the basics more than adequate. Using the listen functions, you can hear exactly where the processing is taking place, and in most cases you can set up the controls on a loop of the offending vocal part in a matter of seconds.

I very rarely find a need to use de–essers, though they can be useful patched into a reverb send to stop the reverb getting too splashy on sibilants. On those occasions when I do need to use a de–esser, I want one that will do the job as simply and as unobtrusively as possible. The Sonnox Oxford SuprEsser isn't just a good de–esser, it is an exceptional one, and though it is capable of all kinds of clever dynamic effects that fall outside the remit of routine de–essing, none of the added features get in the way of simple operation if you don't need them.

This is the best de–esser plug–in I've come across, and it delivers the same high–quality processing as the rest of the Sonnox range.