Multi‑gigabyte drum instruments are of limited use if you don't have the time or skills to program realistic MIDI performances. Can SoundTrek's Drummer plug‑in fill the gap? 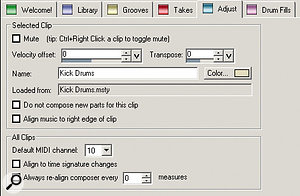 The Adjust tab allows various Clip settings to be adjusted, including the Transpose function, which can help to match MIDI notes with your drum sample instrument.

SoundTrek's Drummer is a plug‑in, but not an audio processor. Rather, it's a MIDI processor in MFX format that provides a tool for creating and arranging MIDI drum parts, based upon a series of predefined styles. It is sold on‑line only, and I had no problem with either the 10MB download or the installation process. As I was going to use Cubase as my host, I also downloaded and installed the small MFX wrapper that allows MFX MIDI plug‑ins designed for Sonar to function within VST hosts. Once this was installed, Cubase recognised the SoundTrek Drummer plug‑in and I was able to insert it within a suitable MIDI track.

The plug‑in is MIDI‑only — there are no drum samples here — so the output of the MIDI track needs to be directed to a suitable drum sound source. I experimented with BFD2 and Groove Agent 3 and, with a certain amount of tweaking to match the output from the plug‑in to the required MIDI notes for particular drum sounds, both work fine. I'm sure almost any drum‑based sampler or VST Instrument could be used just as effectively.

The plug‑in interface is divided into two main areas. The top half contains the Timeline area which, rather like most DAWs' 'arrange' windows, is split into a Track Info pane (on the left) and an area for arranging your drum parts (known as Clips) in sequence. The bottom half is switchable between six different tabs, one of which, Welcome, provides an on‑line version of the user manual, which is also available as a standard PDF.

Drumming In The Library 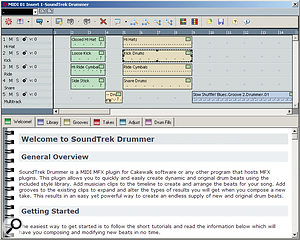 The main SoundTrek Drummer window: users can pick between three preset window sizes, depending upon the amount of screen space they have available.

Building a new drum part usually starts in the Library tab, which introduces the key SoundTrek Drummer concepts of Musicians and Grooves. A Musician can be thought of as a specific style of drumming, and Grooves as basic patterns within that style, which the user pieces together to make a performance.

Both Musicians and Grooves can have three formats. Basic ones play a single drum, while Beats and Multitrack Beats play complete kit performances, on single or multiple 'tracks' within Drummer. Dragging and dropping a Musician from the Basic category creates a Clip on a single track, which will only play a single drum type. Doing the same with a Multitrack Beat creates several Clips, each on their own track and each playing a single drum. Musicians from the Beats category create single Clips on one track containing MIDI data for a complete kit performance.

Multiple Takes can be created for each Clip, each containing a different performance based upon the Grooves available and their relative weighting.The Grooves tab shows all the Grooves currently available for the Musician in the selected Clip. You can create your own Grooves, as well as using the preset ones, and hitting Compose Take creates a new performance for the selected Clip, based on some combination of your chosen Grooves. The relative importance of each Groove (that is, how likely it is that elements from that Groove are used when a new Take is composed) is controlled by the Weighting given to each Groove. Composing a new Take does not lose the previous one, and all the Takes for a particular Clip are listed under the Takes tab. You can audition them in turn, or allow Drummer to pick a Take at random each time the Clip is played.

Creating a complete drum performance simply involves adding and arranging the Clips along the Timeline. The plug‑in provides a fairly standard set of tools for moving, resizing, copying and deleting Clips, so this part of the process will be fairly familiar to any regular sequencer user. As there are a good selection of Grooves related to drum fills — and the Drum Fills tab provides some useful customisation options controlling how fills are played — SoundTrek Drummer has all the key performance elements required to build a full drum track for a typical song structure.

The Groove tab allows the relative weightings of Grooves to be set for the selected Clip.

The sonic qualities of the resulting drum performances obviously depend upon your drum samples, which need to be appropriate for the style of music. SoundTrek Drummer covers many genres: blues, bluegrass, country, dance, funk, hip‑hop, house, jazz, Latin, pop, R&B, reggae and rock are all represented, many with various sub‑styles. All are very useable, but I particularly liked the rock and blues options, which provide plenty of variety. Coupled with the right drum sample set, these sounded pretty good, and I could easily imagine SoundTrek Drummer performing well as a writing tool. Even if there is nothing exactly right amongst the included styles, the ability to mix and match the various Grooves and the instant creation of new Takes make it very easy to use the plug‑in simply to experiment.

The way the plug‑in uses the weighting of each Groove to come up with new Takes is very effective, provided you choose Grooves with similar basic characteristics. I found Drummer particularly useful for creating new fills. When working with audio loops or pre‑programmed MIDI loops, you're often limited to using the same few fills in a particular style. With Drummer you have an endless supply of new fills; even though the results can be a bit hit‑and‑miss, it is very easy to generate 10 or 20 fill performances and then filter out the duff Takes.

The Library tab provides access to an extensive collection of Musician and Groove presets.

With extended use, I did find a few minor niggles. It would be helpful if the documentation listed the MIDI note numbers the plug‑in uses for specific drum sounds. I had to tweak either sound assignments in BFD2 or transpose notes within SoundTrek Drummer (via the pop‑up menu when right‑clicking on a Clip or via the Adjust tab). The latter approach works fine for Clips containing a single drum type, but not for multi‑drum Clips.

While the Clips look like you ought to be able to double‑click on them to open a MIDI editor, you can't! Therefore, once you have used SoundTrek Drummer to create your basic drum performance, the other obvious thing you might like is to export the MIDI data to a standard MIDI track within your DAW for final editing. This is apparently fairly easy to do in Sonar, using the 'Apply MIDI Effects' option from the Process menu. In Cubase, the most efficient workaround involves soloing the MIDI track where Drummer is inserted and, making sure that 'Export Inserts' option is selected, using the Export command to create a separate MIDI file, which can then be loaded back into your project. The process is a little clunky but it does work, and it would be useful to see such details for the major DAWs added to the documentation.

The plug‑in provides a range of options for fine‑tuning new drum fills.

SoundTrek Drummer is a very neat little application and a great way to inspire some instant beat creativity. While the way the plug‑in operates takes a little time to get your heard around — particularly the relationship between Musicians, Grooves, Clips and Tracks — it is not difficult to use and seemed very reliable during my testing with Cubase. It's a shame the current version does not include a MIDI export function, as that would be really useful for a final tweak of the plug‑in's drum performances. That said, SoundTrek Drummer still represents very good value for money — even more so as, at the time of writing, it was on offer at half the standard price. Well worth a look for any songwriters seeking an additional drum programming tool.

SoundTrek Drummer is a very neat little tool for the creation of MIDI drum parts.