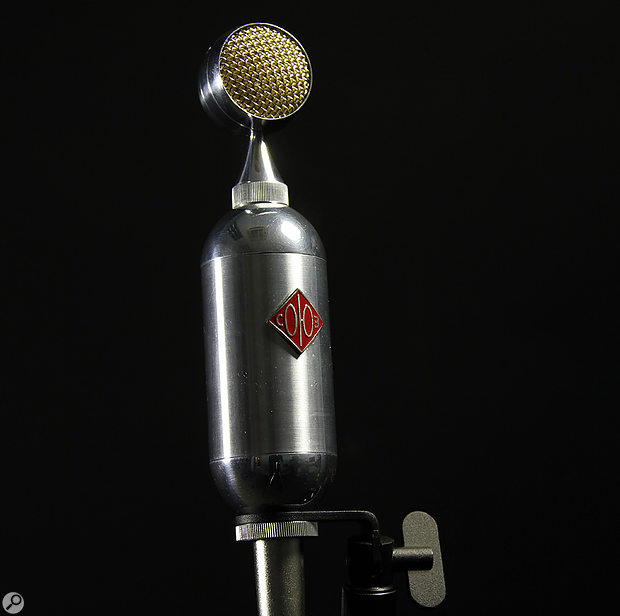 Soyuz’s classy new creation brings a Soviet-era capsule design in from the cold. But how does it sound?

After the Iron Curtain was swept aside at the close of the 1980s, some surprising facts about the Soviet Union began to emerge. One was that its state-planned industries didn’t just produce boring stuff like tractors and ballistic missiles. There were, it turned out, several manufacturers making audio equipment, including some very interesting synthesizers and microphones. Enterprising Western studio owners were quick to pounce on models like the LOMO 19A19 and 19A9, which combined funky Soviet-chic design with classy valve microphone sounds and, at the time, were much more affordable than their European counterparts.

Since then, prices have skyrocketed and supply has dried up, so buying an original LOMO now is even more of a minefield than it was 25 years ago. However, there are several newer Russian manufacturers making microphones that embody the same blend of quirky appearance and high-quality, vintage sound. Among them are Soyuz, whose SU‑017 and SU‑013 were reviewed in SOS May 2015 and November 2017 respectively.

Those mics are both valve-based, but the latest model to emerge from Soyuz’s Tula factory is a large-diaphragm, phantom-powered, externally polarised solid-state capacitor microphone designated the SU‑023, and affectionately referred to by its manufacturers as the ‘Bomblet’. The 023 is outwardly similar to Soyuz’s 017 and its solid-state counterpart, the SU‑019, and all three mics have the same very distinctive body shape. However, the 023 is intended to be more affordable, and consequently uses a polished metal shell rather than the more elaborate painted finish of the other Soyuz mics.

The SU‑023 is also different from its siblings from a functional point of view. Whereas the 017 and 019 use a capsule based on the Neumann K67 design, the 023 employs what Soyuz describe as a “rare Soviet-era triple-backplate capsule”. Unpicking this description a bit, it turns out that this is based on the LOMO 19A21, which, in turn, was derived from AKG’s celebrated ‘brass-ring’ CK12 design. The cardioid pattern in a large-diaphragm capsule is created by a pattern of holes in the backplate which act as an acoustic labyrinth, and the CK12 had a complex backplate which made it expensive to produce and somewhat prone to manufacturing variation. LOMO’s engineers simplified the design to eliminate the need for ‘blind’ holes, and their backplate consisted of three layered discs, each with its own pattern of through-holes. This is the basis of the ‘triple backplate’, which Soyuz have further developed in the SU‑023. Although there is a rear diaphragm, it’s not metallised, so the capsule is cardioid-only. Unlike the CK12, it is also centre- rather than edge-terminated.

The other unusual feature of both the 023 and the 019 is the use of a custom-made toroidal output transformer, rather than the more usual square design with a laminated core. Toroidal transformers are employed in some high-end ribbon mics from the likes of Coles, Samar, Mesanovic and Royer and, at least in theory, have several advantages in this role. In particular, fewer turns of wire are needed to achieve a given inductance, so toroidal transformers have lower resistance than their conventional counterparts. Their use in capacitor mics is relatively uncommon, however, perhaps because they are more expensive to make.

The Soyuz SU‑023 is supplied in a very attractive wooden box with a magnetic clasp. The need to bring the mic to market at an affordable price means no shockmount is included, but you do get a very basic standmount that screws on to the base of the mic using a threaded ring. This struck me as being a cost saving too far, pretty much guaranteeing loud subsonic thumps every time someone brushes against a mic stand, but the 023 fits comfortably into a Rycote InVision if needs be.

Rather than implement the promised -20dB pad using a switchable circuit on the mic, Soyuz supply it as a separate component, as is found on some modular mic systems. To attach it, you unscrew the capsule assembly and re-attach it with the pad between capsule and mic body. This works, but it’s not something you’d want to do all the time, and leaves the capsule pointing sideways.

The SU‑023’s frequency response is specified as 30Hz-18kHz, and the chart suggests a broadly flat response across most of this range, apart from a hint of suck-out in the low mids and a 5dB peak at 10kHz. Sensitivity is quoted as 10mV/Pa, and output impedance at 190Ω. The microphone is said to tolerate SPLs of up to 140dB, presumably with the pad, but it’s not stated what level of distortion this figure relates to. Despite using solid-state rather than valve circuitry, the SU‑023 is only a couple of dB quieter than the SU‑017, with self-noise given as 18dBA. However, given that it seems intended mainly for close-miking applications, this is unlikely to be a problem in practice.

The ‘brass-ring’ CK12 capsule used in the AKG C12, C12A and early C414 models is now highly sought-after and much imitated, for good reasons. A good example has a distinctive, slightly ‘soft’ sound character which somehow gives the subjective impression of airy brightness without overly emphasising high frequencies in the problematic way that some capacitor mics do. Because of the modifications that LOMO and Soyuz have brought to the capsule design, not to mention its very different headbasket and transformer, you would not expect the SU‑023 to sound exactly like an old C414, but it does have something of the same character to it, with none of the hard, occasionally honky mid-range that you sometimes get from Neumann-style large-diaphragm mics.

Placing the SU‑023 next to my own C414EB suggested that the Soyuz mic has a slightly smoother sound, with a thicker and more rounded low mid-range. The Soyuz’s 10kHz emphasis is fairly obvious, but it stays out of the way of the sibilance range on most vocalists; although the high-frequency lift on the 414 in cardioid is not as prominent, it seems to be located lower down the frequency spectrum. On my voice, if anything, I actually preferred the SU‑023. The polar pattern struck me as having a fairly wide cardioid character, with a little less attenuation of sound arriving from the rear than you get with, say, a U87.

The overall impression is of a sweet, open-sounding mic that is well on the lively side of being neutral, but not so much as to limit its versatility. I certainly didn’t encounter any sources during the review period that struck me as being a bad match for the SU‑023, and it even delivered a pretty decent performance as a kick-drum mic with the pad in place. As Paul White never tires of saying, if you’re looking for a mic primarily to suit your own voice then you really need to audition it for yourself, but if you get a lot of different singers and instrumentalists into your studio, I think this mic would give reliably good results on many of them. It’s also good value for money for an entirely hand-made microphone, even if the non-inclusion of a shockmount is a false economy. In a world where many supposedly ‘boutique’ microphones are really badge-engineering exercises that conceal mass-produced Chinese capsules and circuitry, the Bomblet is an original design that stands out both for its sound and its striking looks, and I shall be sorry to return the review model.

As far as I know there are no other current production microphones that use the LOMO 19A21 capsule, and only a few that employ a toroidal output transformer. However, there are very many mics that employ copies of the AKG CK12 capsule from which the 19A21 was derived. The best modern recreation of the CK12 that I know of is the CT12 from Campbell Transmitter; Tim Campbell doesn’t make a complete microphone, but for around the same price as the Soyuz you could purchase a suitable donor mic and have him fit a CT12 in it.

Drawing on years of Russian expertise in capsule design, the SU-023 is a high-quality studio microphone with an attractive, airy sound, at a surprisingly reasonable price.