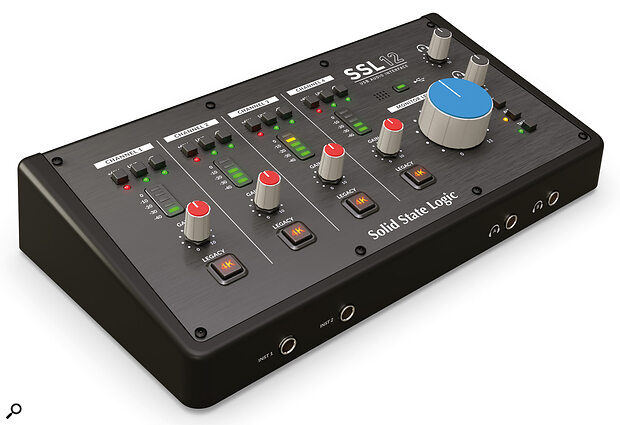 The SSL 12 is a cleverly conceived interface with a very attractive price tag.

When SSL doubled up their SiX analogue mixer last year, they chose not to call it the TWeLVe. It turns out that number was reserved for a different product, which builds instead on the 2 and 2+ [reviewed SOS April 2020] introduced a couple of years earlier. Like those devices, the new 12 is a bus‑powered USB audio interface, but as its double‑digit designation would suggest, it’s a lot bigger and more capable.

The 12 has a similar desktop form factor to the smaller interfaces, with all the controls on the top, though naturally it is somewhat larger. Connection to the host computer is made using a single Type‑C USB port, and the 12 requires the full 900mA power delivery described in the USB 3.0 specification; in other respects, it’s fully compatible with USB2. There’s no option to connect a separate power supply or a second USB power source, as is the case with some interfaces.

The name, in theory, refers to the total number of available inputs. The first four of these are analogue mic/line channels on combi jack/XLR sockets. All four have individually switched phantom power, high‑pass filters, five‑segment LED meters and SSL’s 4K+ ‘vintage’ mode, and the first two also have a high‑impedance option for directly recording guitars and basses, with separate quarter‑inch jack inputs. This number is made up to 12 by the provision of a single optical input, which, depending on sample rate, accepts up to eight channels of digital audio using the ADAT Lightpipe protocol. And it doesn’t stop there, because despite the name, the SSL 12 actually presents 16 inputs to your DAW. The additional sources are a stereo loopback input that can capture audio from other applications, and the built‑in mono talkback mic, which shows up as a stereo input.

At the back we find a USB‑C port, ADAT in, full‑size MIDI I/O, four quarter‑inch audio outputs and four combi inputs. Two instrument inputs and two headphone outputs are found on the front panel.

On the output side, things are a little simpler, with two stereo pairs of quarter‑inch jacks augmented by two front‑panel headphone sockets. This is outwardly the same total output complement as on the 2+, but the implementation is a lot more flexible. Should you wish to use the second line output pair to connect an alternate monitoring system, speaker switching is catered for, with a dedicated front‑panel button and ±12dB trim available for the alternate speakers. It’s possible to create custom cue mixes for each headphone output separately, and even to repurpose the headphone outs as additional line outputs. The line outputs are DC‑coupled, so can be used to send control voltages to an analogue synthesizer. Oh, and the 12 also inherits the 5‑pin DIN MIDI In and Out from the 2+.

Low‑latency monitoring on the 2 and 2+ is controlled using a knob that allows the user to adjust the monitor balance between playback and input signals, and a button to determine whether the inputs are heard panned left/right or centrally. That’s fine for a stereo interface, but the 12’s greater complexity demands a more flexible system. More flexible, in fact, than could be easily implemented in hardware alone, and so the 12 has its own software control panel. 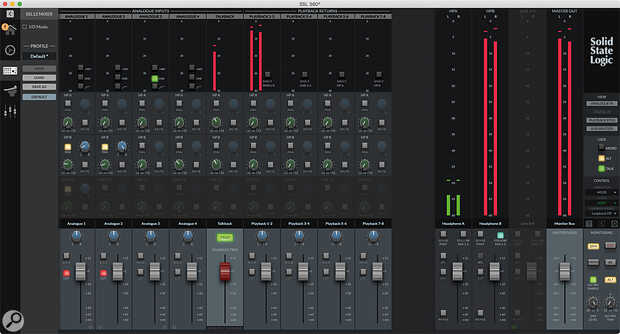 The mixer software will feel familiar to anyone who’s used an analogue console.

The 12 isn’t just software‑controlled, however. It’s “360‑enabled”, meaning that control is enacted from the same SSL 360 application used to interact with the UF8 and UC1 control surfaces, and with SSL plug‑ins in their Plug‑in Mixer. The 12 gets its own pane titled SSL 12 Mixer, which looks quite a lot like the top panel of the BiG SiX. The interface presents a total of eight outputs to your DAW, and these appear as inputs in the Mixer pane alongside the four analogue inputs, eight ADAT inputs and the talkback input; each channel type can be shown or hidden as required. The input channel phantom power, high‑pass filter and line mode switches are duplicated in software, and cue mixing is enabled by three send controls on each channel. These are routed to headphones A and B and to outputs 3+4, though this bank is greyed out if you’re using those outputs for alternate speakers. A nice touch is that there’s an optional pan control for each send, so you could, for example, pan a click track hard left for a vocalist who wants to take one headphone off, but keep the click central for another musician.

In fact, there are lots of nice touches to be found throughout the SSL 12 Mixer page. On the monitor control side, the hardware Cut and Alt buttons are joined by configurable Dim, a Mono button and one that inverts the polarity of the left channel; pressing both of these together lets you monitor only the Sides or Difference signal. The physical buttons can also be reassigned in software, so if for instance you have no need of talkback, you can repurpose the Talk button as mono or dim. The bus channels that feed headphones A, headphones B and outputs 3+4 can be set to pick up their sends pre‑ or post‑fader, and any or all of them can pick up the AFL bus when something is soloed. A Settings pop‑up allows each headphone output to be optimised for standard, high‑sensitivity or high‑impedance headphones, or converted to a balanced or unbalanced line output. And finally, if you’re monitoring everything through your DAW and don’t need the Mixer functionality, you can simply select I/O Mode, which routes each source directly to an appropriate output or DAW input. My only minor niggles are, firstly, that there’s no indication on the 12 itself to show whether ADAT clocking has been successful, and secondly that talkback only operates in latching mode.

Compared with the 2 and 2+, some of the 12’s audio specifications seem to have been adjusted, again mostly in ways that seem appropriate to its role as the centrepiece of a more serious home studio. A 0dBFS signal sent to the line outputs, for example, will produce a +24dBu analogue level rather than the +12.5dBu of the 2 and 2+. This means that if you connect active monitors directly to the line outs, you may find you never use the main level control above the lowest part of its range; if so, it might be helpful to permanently engage Dim in the Mixer page. This sort of non‑ideal gain structure also means that if you leave the 12 switched on while powering your computer up or down, you’ll hear noticeable splats and thumps, so if you can’t turn down the input gain on the monitors themselves, it’s probably a good idea to get into the habit of using the rear‑panel on/off button.

In mic preamp mode, the inputs behave pretty much as they did on the 2+, which means they offer a 62dB gain range and an impressively low A‑weighted EIN figure of ‑130.5dB. As on the smaller interfaces, however, they’re still aligned very hot, with the maximum input level in mic mode being +6.5dBu. Consequently, there’s tons of clean gain available for speech and so on, but the flip side is that if you want to record drums, you’ll either need to use very insensitive mics or get yourself some inline pads. However, the 12 can accommodate levels of up to +24dBu in line mode, and the fact that line ins and outs are both aligned to this level should make it easier to patch in external hardware at mixdown if you want to.

Like the 2 and 2+, the 12 uses generic audio drivers. On Mac OS it works with the built‑in Core Audio driver, whilst Windows users need to install the usual Thesycon ASIO driver. My tests took place on a Mac, and latency performance was typical for devices of this type. Reaper reported a round‑trip latency of 7.8ms with a 32‑sample buffer at 44.1kHz, and a loopback test confirmed this within a few samples. This would suggest that the built‑in mixer adds a millisecond or so to the usual driver latency, and SSL confirmed that the mixer latency is 0.98ms at 44.1kHz. To my mind that’s a price worth paying for such an elegant mixing utility, but if you do a lot of work with soft synths or you need to monitor input audio through the DAW, it might be worth bearing in mind that working at 96kHz not only brings down latency due to buffering but also reduces the mixer latency to 0.17ms.

As you’d expect, it sounds very good, with the low‑noise preamps being a particular highlight.

There was a time when bus‑powered devices were very much the poor relations of the audio interface family. I expected Thunderbolt to change that, but in fact it’s been USB 3 that has given them a much needed shot in the arm. And that’s nothing to do with data bandwidth, which was already more than enough under USB 2, or latency, which is unchanged. It’s purely down to the more generous power delivery specification of USB 3 (see box). Where once it was a real struggle even to power a 48V microphone from a bus‑powered unit, we’re now seeing supercharged desktop interfaces that can handle multiple mics, run built‑in DSP and operate at full ‘professional’ studio levels. The SSL 12 is an excellent example. It’s compact, highly portable, and doesn’t require an external PSU, yet is capable of tracking a full band when paired with an ADAT‑equipped preamp.

As you’d expect, it sounds very good, with the low‑noise preamps being a particular highlight. Dynamic range figures of 111dB on the inputs and 120dB on the outputs mean its conversion is never going to be the factor limiting the quality of your recordings and mixes. But what really impressed me is the way SSL have sneaked in so many ‘professional’ features and concepts from the world of large‑format consoles. The built‑in mixer is extremely well thought‑out and remarkably versatile, yet everything’s presented in a way that will be instantly familiar to anyone who’s spent time on an analogue desk. Features such as speaker switching with level trim, left channel polarity reversal, talkback and pre/post‑fade switching for cue sends are rare enough on large rackmount interfaces, and almost unheard of on a desktop device like this. There is clearly potential here to develop larger and more powerful systems on the same framework, and I look forward to seeing where SSL go next after the 12. The 16? The 32? The 4000? Hang on...

There are several different aspects to the USB specification, and the two most important for audio interfaces are data bandwidth and power delivery. The data bandwidth of USB 2 was already more than enough for most multitrack audio applications, so the bandwidth increases in USB 3 make no practical difference. The SSL 12 is fully compatible with USB 2 as far as data transfer goes.

The USB 3.0 spec also raised the maximum current that devices are permitted to draw. This limit was raised again in USB 3.1, when the move to Type‑C connectors was made. The SSL 12 is described as a USB 3.0 device because it requires the full 900mA specified by USB 3.0; SSL say that there are a few circumstances where it could draw more than this, in which case you’d need to connect it to a USB 3.1 host port for full performance. That might be the case if, for example, you were using four phantom‑powered mics plus two pairs of high‑impedance headphones.

A beautifully thought‑out bus‑powered desktop interface with lots of neat little features that lift it above the herd.