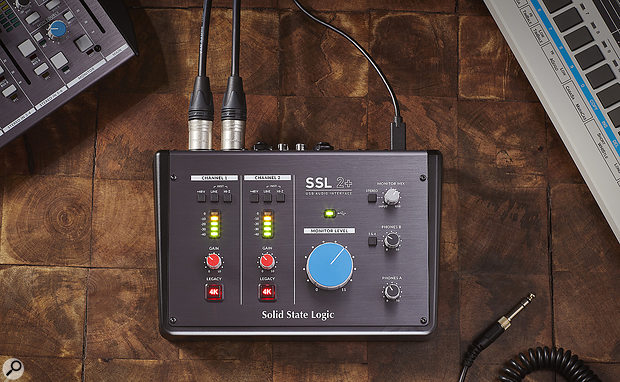 If you've ever dreamed of having an SSL in your studio, that dream just became surprisingly achievable...

Many of the giants who bestrode the world of recording during the heyday of the large-format console are long gone. The manufacturers that have survived are those who have adapted successfully, moving into the new markets created by the explosion in digital recording and home-studio gear. Now part of the Audiotonix group, Solid State Logic still make awe-inspiring analogue and digital mixing consoles, with prices to match — but they also cater very effectively to the project-studio market. Over the years, they've introduced a number of innovative products with compact footprints and focused feature sets that retain the high quality levels we all associate with the brand.

More recently, SSL have developed a Chinese manufacturing operation which has enabled them to bring products such as the Fusion mastering processor and SiX mixer to market at very competitive prices. Even so, eyebrows were raised at this year's NAMM Show when they announced a pair of audio interfaces. Weighing in at £179$229 and £239$279 respectively, the 2 and 2+ are by far the most affordable hardware products SSL have ever produced, to the point where they make realistic alternatives to established interfaces from the likes of MOTU, Focusrite, PreSonus and Audient. Is it really possible to do justice to SSL's heritage at this price?

Both 2s are desktop audio interfaces that connect to the host computer over USB, and also draw their power that way: there is no option to use an external PSU. Although both are equipped with the Type-C socket that is specified for USB 3.1, they are USB 2 devices and can be connected to any USB 2 or later port with no loss of functionality. The package includes both Type C-to-Type C and Type C-to-Type A cables.

We were sent the 2+ for review, but both units occupy the same wedge-shaped metal case. This is lightweight and compact enough to be genuinely portable, whilst feeling substantial enough to survive the odd knock and scrape — the review unit had clearly been through some rough treatment at the hands of our couriers, and was none the worse for it.

Whereas some manufacturers place headphone sockets and guitar DI inputs on the front panel, all of the 2 or 2+'s I/O lives on the rear, with all of its controls and metering on the top panel. Even on the more fully featured 2+, this panel feels generously spaced and well laid-out. The 2 and 2+ are identical as far as audio inputs go. Both provide two Neutrik Combo connectors, each of which can act either as a mic preamp, a line input or a high-impedance instrument input. Phantom power is switched independently, and each channel also has a large, square 'Legacy 4K' button, introducing a circuit which is said to offer "analogue colour enhancement for any input source, inspired by the 4000-series console". A five-segment LED ladder meter helps you keep track of input levels.

The only input that's unique to the 2+ is a five-pin DIN port; MIDI In and Out are nice additional features on this unit that are often neglected on small audio interfaces.

Apart from MIDI, the key differences between the 2 and 2+ are all on the output side of things. The 2 offers only a single headphone output and a pair of monitor outputs on balanced quarter-inch jacks, while the 2+ adds a second headphone socket and two pairs of RCA phonos. The first pair of phonos mirrors the main monitor outputs 1/2, while the second add an additional 3/4 output pair that is addressable independently within your DAW. Both headphone sockets mirror the main output by default, but the second can optionally be switched to pick up outputs 3/4 instead. The headphone outputs and the main monitor output all have their own volume controls, the latter being satisfyingly ginormous. 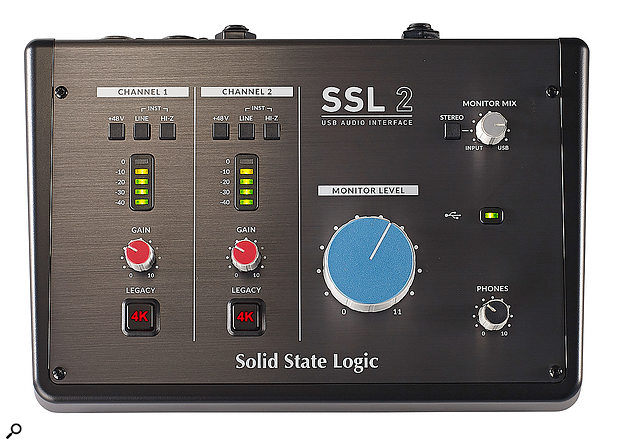 Physically, the 2 occupies the same chassis as the 2+, the only difference being the number of rear-panel outputs and the additional headphone volume control on the front panel.

Like quite a few other small interfaces, the 2 and 2+ make provision for low-latency input monitoring entirely in hardware. Input signals can be fed directly into the monitor path, with a fixed latency of around 1ms, and what you hear at the output is a balance of input signal and DAW return determined by the position of the Monitor Mix knob. This applies to all of the outputs and can't be defeated, so it's not possible for instance to audition the input signal on Phones A without it also contributing to the main output and Phones B. A button labelled Stereo determines whether inputs 1 and 2 are both heard panned centrally, as would be appropriate for two mono mics, or hard left and right, as you would want with a stereo source connected.

The 2 and 2+ are class-compliant devices, and on Mac OS, they use the built-in Core Audio USB driver. There is no control-panel utility and thus no need to install any software. However, as ASIO is a third-party standard and not built in to Windows, users will need a driver in order to use the SSL interfaces on a PC. This is the same Thesycon driver used by many other interfaces; it always used to be a bit pants, to use a technical term, but I'm told that it has upped its game in recent years. I no longer have a Windows test machine, so can't confirm this.

Bus-powered USB interfaces don't have the greatest reputation for sound quality, but the 2 and 2+ sport impressive specifications given their prices. Mic preamp Equivalent Input Noise is an excellent -130.5dBu (A-weighted), and dynamic range is quoted as 110.5dB on the inputs and 112dB on the monitor outputs. On the digital side, all usual sample rates from 44.1 up to 192 kHz are supported, with no loss of functionality at higher rates.

Although these are the most inexpensive SSL devices ever, they don't cheapen the brand at all.

With a few small exceptions, the feature set of the 2+ follows fairly well-established conventions, and the experience of using it makes clear exactly why those conventions are well established! As there is no on-screen mixer or control-panel utility, it's very straightforward to get to grips with. The layout is generally excellent from an ergonomic point of view, with the only slight quirk being that you need to have both the Line and Hi-Z buttons engaged in order to connect an electric guitar or similar — just using the Hi-Z button alone won't do it.

The additional headphone output on the 2+ greatly increases its versatility, allowing two musicians to jam, or an engineer to monitor what an artist is recording. It would be even more versatile if you could defeat input monitoring on either of the output pairs, so that for instance the engineer could monitor things as they're coming back from the DAW rather than as they're going in, but that's hardly a major failing. Perhaps more of an issue for some musicians will be the use of unbalanced RCA phonos to present those outputs to other gear. That's really handy if you need to hook your laptop up to a DJ mixer or even a home stereo, but in a more conventional recording situation, balanced jacks would be much preferable.

In terms of sound quality, I can't fault the 2+. Many bus-powered interfaces are afflicted with weedy headphone amps, but I had no problem getting a decent level out of these; and although the maximum output level of +12.5dBu at the monitor outs and +6.5dBu on the unbalanced outputs wouldn't be ideal in a professional studio context, it's fine for the direct connection of active monitors in a home studio.

The quoted "huge" 62dB gain range of the preamps applies whether they are in mic, line or high-impedance mode, but with the input padded down by 18.5dB in line mode or 9.5dB in instrument mode. In mic mode, the maximum input level that can be accommodated is +5.5dBu. This gives the 2 and 2+ a lot of clean gain for quiet signals, but means you probably won't be able to record close-miked drums or loud bass amps without buying some inline pads. Given that a two-input interface is of limited use for drum recording anyway, this seems a sensible compromise on SSL's part — I imagine most buyers will be more concerned about getting a decent level from spoken word or acoustic instruments — but it's worth bearing in mind.

It would probably be optimistic to expect a single button to capture the character of an SSL 4000-series console, but the Legacy 4K option certainly introduces a noticeable change in the tonality of the input signal. Tests suggested that it adds a high-frequency shelf with a very low Q, beginning at around 1.5kHz and reaching +3dB around 15kHz. The audible results are more noticeable than that sounds, which is presumably because there is also some saturation involved. Like the very similar Air switch found on many Focusrite interfaces, it's an appealing effect, but one that could easily cause problems at the mix if over-used or applied to the wrong source. In both cases, it would be nice if it could be added by degrees rather than as an 'all or nothing' option.

Although the 2 and 2+ represent a pretty radical departure from previous SSL products, they aren't intrinsically revolutionary. For the most part, they adhere to conventions and ideas that have shaped desktop interfaces for many years, and you'll find similar ideas expressed with minor variations in products such as the Audient iD4 and iD14, Focusrite Scarlett Solo and 2i2, PreSonus Audiobox USB 96 and Studio 24 and the ESI U22 XT. So it's very much to SSL's credit that their first entries into this crowded market are so strong.

The most direct competitors for the 2 and 2+ are the MOTU M2 and M4, which were reviewed in SOS March 2020. These are impressive beasts and, in fact, slightly outgun the SSL interfaces in some aspects; notably, they offer even better dynamic range specs, superior metering and faster low-latency performance. In their turn, though, the 2 and 2+ hit back with excellent mic preamps that probably qualify as 'best in class', and I think most users would choose the 2+'s second headphone output over the M4's additional pair of quarter-inch line outs. The wedge-shaped form factor of the SSL interfaces is arguably more desktop-friendly, too.

Neither the SSL nor the MOTU desktop interfaces are the cheapest around, and you can obtain a similar feature set for less from some of the other manufacturers mentioned above. But to my mind, both product ranges justify the price differential. They have better audio specifications, they look and feel like professional devices, they sound good, and they offer enough additional bells and whistles to lift them above the crowd. Perhaps the highest praise I can give the 2 and 2+ is to say that although these are the most inexpensive SSL hardware products ever, they don't cheapen the brand at all. Impressive.

SSL's entry into the world of affordable desktop audio interfaces might have been unexpected, but it looks set to be very successful. The 2 and 2+ offer a compelling balance of form, features and audio quality at highly competitive prices.