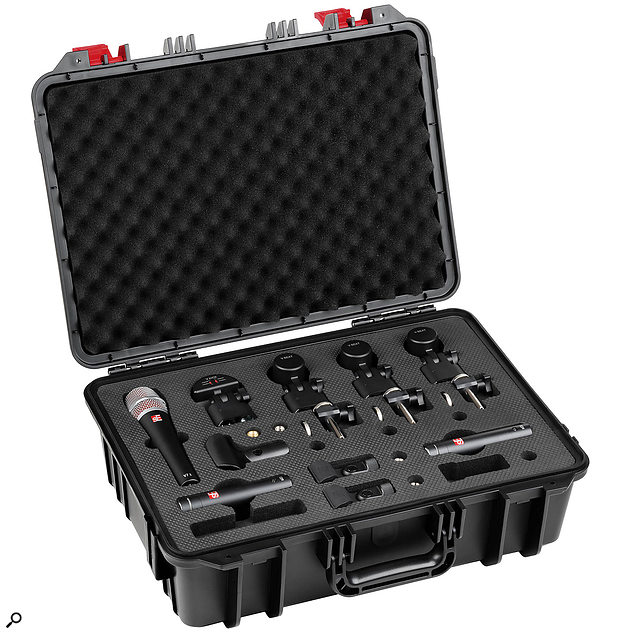 The V Pack Arena drum mic kit from sE Electronics comprises one V Kick mic, three V Beat tom mics, a V7 X dynamic snare mic and a pair of sE8 pencil capacitor mics for use as overheads. All the mics are solidly built, with cast–alloy bodies and steel grilles, and everything comes in a very tough, foam–lined plastic case (which has a little spare space should you need to cram in another mic) along with three V Clamps that clip onto the tom rims, plus a standard mic clip for the V7 X and US/EU thread adaptors.

The supercardioid V Kick is an interesting dynamic mic as it features switchable voicing. Its suspension-mounted capsule, protected by a windshield, utilises a neodymium magnet and a lightweight aluminium voice coil for extended HF performance. It has an integral swivel joint that incorporates the XLR output and a US threaded stand-mount point for easy mic placement. The quoted frequency response is from 20Hz to 19kHz, though its specific kick voicing means that its response is very far from flat. The voicing switches are on the back, offering Modern or Classic modes for both the mid-range and high end, thus providing four permutations (all featuring the mid-range dip we've come to expect from kick mics). You need a small, sharp tool of some kind to access the recessed slide switches.

The left-hand switch adjusts the mid-range response, with Classic mode aiming for a deep and punchy sound with a gentle mid–scoop, a 40-50 Hz boost and a 'click' focus at around 4kHz. Modern has a more scooped character, again emphasising the lows but also bringing out more detail in the beater click. The right-hand switch then selects the high-frequency character, with Classic focusing on upper mid–range presence and Modern bringing out the transient detail for a more aggressive rock/metal sound, with a wider HF boost range. That's what the settings are supposed to do — however, what I heard during my tests didn't entirely tally with these descriptions, as I'll come to shortly.

For snare, the supercardioid V7 X's neodymium magnet and aluminium voice coil give the capsule a frequency response that extends up to 19kHz and down to 40Hz, where its internal shockmount mitigates the effects of vibration. There are twin presence humps at around 4kHz and 12kHz, but neither exceeds 4dB above nominal. Its 184mm–long physical format is perhaps closer to what you'd expect from a handheld mic, which makes it a little more tricky to position than the tom mics, but in most cases it can be positioned towards the back edge of the snare drum without too much trouble. 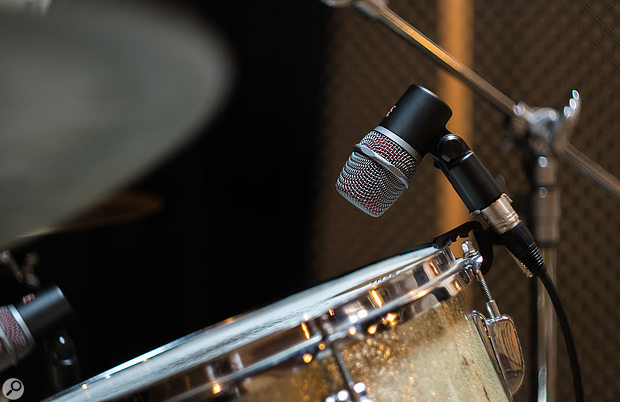 The V Beat mics each come with an adjustable drum–rim mounting clip.

The V Beat is a short–body dynamic microphone and can be used either with snare or toms, though in this kit they are intended for tom use. It has a tight cardioid pickup pattern, again with a shockmounted capsule, which is closely related to that of the V7 X. It has a built-in swivel mount that makes it easy to position correctly, especially in conjunction with its V Clamp mount. Similar in concept to other rim clips I've used, the lower section of the V Clamp is made from a flexible material with notches for different rim depths, simply clipping on with no moving parts other than the mic mount. The height and angle of the microphone is changed via loosening the V Clamp's knob, and the mic clip is fixed to a height-adjustable metal bar.

For the overheads we have a pair of sE8 cardioid-pattern capacitor microphones built with three–micron, gold–sputtered diaphragms and low noise, surface-mount Class–A electronics. Pads for both 10dB and 20dB attenuation can be switched in to allow high SPL handling (up to 159dB with the -20dB pad switched in), and there is also a choice of 6dB/octave low-cut filtering at either 80Hz or 160Hz. When not doing duty as a drum mic, the sE8 also works well on most acoustic instruments including acoustic guitar. The mic's response is nominally flat from 20Hz to 20kHz with just a hint of a presence hump at around 8kHz, and its equivalent noise level is just 13dB A–weighted. Being a capacitor mic, 48 Volt phantom powering is essential.

I was very impressed and would be hard pushed to find a similarly priced microphone kit that sounded better.

The V7 X proves to be a very capable snare mic delivering a solid, lively sound while the V Beats produce a tom tone that is both rounded and detailed, with a good sense of attack. The sE8s used as overheads bring the kit to life, adding air and detail. So far that's what you'd expect from a drum–mic set, and there are many alternatives that produce similar results. But what sets most drum mic sets apart is the kick mic, and my small 16–inch Tama kick always presents a challenge. Until now the Audix D6 has been the only mic that's given me the sound I need from that particular drum, so I was particularly interested in how the V Kick would cope. 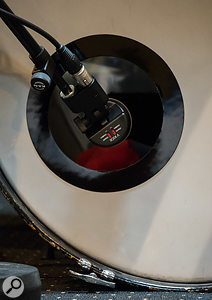 The V Kick features voicing switches for both mid and high frequencies, giving you a choice of four different tonal options.As it turns out, the V Kick gets very close to the sound and depth of my D6, with the four tonal options allowing the tonality to move either side of the D6 sound. However, I did find that the voicing switches gave me very different results to the ones I expected. I recorded examples with all four tonal permutations, and the most rounded sound, which I'd associate with a 'classic' tone, came from having both Modern settings engaged, while having both Classic settings engaged produced a tighter, snappier tone that I'd associate more closely with modern rock productions. In all modes the sound was deep, solid and suitably punchy, which is impressive given the size of the kick drum.

While this is not a budget drum mic set, it is far from the most costly yet is capable of excellent results. All the mics do their jobs well, and while I'd have liked to see a more compact snare mic, I have no complaints about the sound. The V Clamps are also solidly engineered, making it easy to get the mic just where you need it. With its voicing options, the V Kick mic is particularly versatile, and all the sounds it produced were powerful and very usable across a range of genres, so you should easily be able to find the combination of voicing settings that sounds best for what you are doing.

All the mics in the kit have roles outside of drum miking too, so the set also covers general instrument and vocal miking duties to a high standard. Overall I was very impressed and would be hard pushed to find a similarly priced microphone kit that sounded better.

The Audix DP5-A, Shure DMK57-52 4, Sontronics DrumPack and Beyerdynamic TG kits are in a similar price bracket, though they don't include overheads. The Audix DP7, Sontronics DrumPack Plus and Sennheiser 600 kits do include overheads, but are a little more expensive. The cheaper Audio–Technica MBDK7 and Shure PGA Drumkit 7 sets are also worth considering.

Amongst the mid-priced drum mic kits, this one turns in a very professional level of performance.