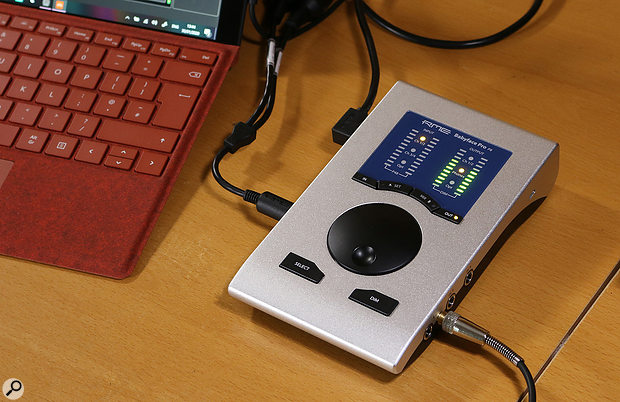 The Babyface has been a winning formula for RME since it launched back in 2010 and was reviewed very favourably by our own Sam Inglis. The Babyface Pro came along five years later and Mark Wherry echoed Sam's sentiment of 'What's not to like?' Now we have the Babyface Pro FS, which is more of a refresh than an entirely reworked product, and it appears to keep all the things we like while stretching the technology to some new places.

What we like is the unassuming desktop form factor, the metering and that nice big dial that lends an effortless front end to the painstakingly achieved technical detail housed within. We also like that it comes in a hard plastic case reminiscent of a Bosch power drill, which would survive being run over by a tank. Mark mentioned in his review that he was surprised to find "A full printed manual! In 2016!" Well, imagine my surprise at finding one in 2020. And this is no quickstart guide in a dozen languages, this is 100 pages of detailed, pertinent information.

Physically, the Babyface Pro FS is almost completely unchanged from the earlier version. The same non-locking XLR microphone inputs and XLR main outputs on the back; two line and Hi-Z instrument inputs on the right side, along with parallel 3.5mm and quarter-inch headphone outputs. On the left side is the USB port, optional DC power socket when USB power is not available, ADAT optical in/out and the socket for the MIDI In/Out breakout cable. One wonders whether they could be persuaded to consider the increasingly common TRS MIDI sockets to absorb that last remaining breakout cable?

There are two hardware changes. The first is a small rectangular hole on the right side that acts as a Kensington Lock port to stop people wandering off with your interface. The second is a small dip switch on the underside that flips the main outputs from +4 to +19 dBu. Confusingly, in all the NAMM coverage I've seen this was claimed to boost the output signal but actually it does the opposite. It reduces the output level and improves the signal-to-noise ratio for the more sensitive active monitors so that you can keep the levels in TotalMix FX closer to zero.

All the big changes have gone on under the hood. The first change is the inclusion of the SteadyClock FS circuit from the ADI‑2 Pro FS. This is RME's proprietary clocking technology that clocks things more precisely than anything has ever been clocked before. Clock inaccuracy is known as jitter, and we experience that in varying sound quality and sometimes clicks and dropouts. This was found to be a problem with MADI technology and so RME developed SteadyClock to sort it out. It's now been developed further to become 'SteadyClock FS' and they've found it useful in attaining extremely low levels of jitter in other products. 'FS' comes from a measure of fluctuation. Normally jitter is quoted in nanoseconds or picoseconds, whereas here, we're measuring it in FemtoSeconds. This should mean that the output of the Babyface Pro FS offers amazing audio fidelity with extremely low noise or distortion.

In terms of sound quality, the Babyface Pro FS is as transparent, clear and pristine as we've come to expect.

The signal-to-noise ratio of the microphone inputs has been improved from 112.2 to 113.7 dB and inputs 3&4 have gone from 114 to 116.3 dB while improving the THD by 8dB. The headphone outputs have gained the same op-amps as the ADI‑2 Pro which has boosted the power from 70 to 90 mW and improved the THD by 10dB. Output impedance of the 3.5mm headphone output has been lowered from 2 to 0.1 Ω.

I tried the output with some AKG K240DF (2x600Ω) headphones, which are often hard to get a decent volume from and there was plenty of level. I compared the same level with my more modest Status Audio CB-1s (32Ω) and it gave them a solid rattling — I had to dial it back to about half as much to make it comfortable on the ears. So, for me, there's nothing wanting in the level of the headphone outputs.

The final improvement comes with RME shaving off another 6 samples of input latency with a new ADC. They say, "it won't get quicker..." which is likely because if they're not careful they'll be heading into negative latency figures which can get very messy with time travel and relatively paradoxes. It's not the actual figures that are most impressive, though, it's the fact that they all work. With many audio interfaces there can be surprisingly low buffer-size options, down to 16 and sometimes 8 samples, but rarely do they offer stable playback at these levels. They also tend to use hidden buffers to ensure some kind of playback and so the latency figures are never quite what they seem. With RME all the buffer sizes work well and offer realistic latency figures that beat the latency of other interfaces reportedly set to smaller buffers.

Using the Oblique Audio Round-Trip Latency (RTL) Utility I was able to measure the Babyface Pro FS down to 3.1ms with 48 samples at 44.1kHz, 2.9ms with 96 samples at 96kHz and 2.8ms with 192 samples at 192kHz. These are significantly smaller than the previous Babyface Pro to the region of 0.5-0.7 ms and puts the performance closer to that of the UFX on USB 3.0.

As a useful bonus all the outputs on the Babyface Pro FS are DC coupled, so you can use them as CV outputs from your DAW to control analogue synths or Eurorack. I measured ±5V out of both the line outputs and the headphone outputs.

In terms of sound quality, the Babyface Pro FS is as transparent, clear and pristine as we've come to expect. You'd have to have extraordinary ears to notice the improvements they've made to the signal-to-noise ratio, but whether recording guitar, voice or synthesizers I had absolutely no complaints.

The Babyface Pro FS takes a great thing and makes it even better. The most noticeable improvements for the average user will be the output dB switch for the main outputs and the increased level in the headphones. The latency figures and audio performance have always been top-notch and it's the stability at these levels that continues to shine. The SteadyClock FS will no doubt be of interest to engineers but the rest of us can take it as an assurance of uncompromising audio quality in our recording and monitoring. It's a handsome box with a good form factor that sounds brilliant and works reliably at low latencies. What's not to like? 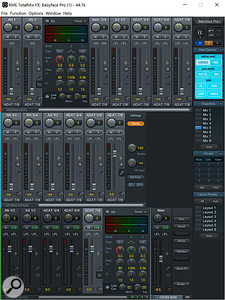 Having installed many RME products on many systems I'm very familiar with the somewhat impenetrable nature of the TotalMix FX software, which can frustrate casual users and reviewers alike. The TotalMix FX software (which makes sense when you've spent some time with it) remains the same, with its powerful and complex routing, DSP-driven EQ and host-based reverb and delay. Thankfully, sound seems to come out of the headphone outputs by default so if you're a new user you can at least get started without any difficulty.

The iPad remote control app takes a couple of clicks to enable and gives you a seamless projection of the TotalMix FX software. The £3.99$3.99 required to activate the full TotalMix FX software when using the iPad as your recording device is still a bitter pill to swallow.

The best desktop audio interface gets slightly better with some worthwhile enhancements that keeps it top of its game.