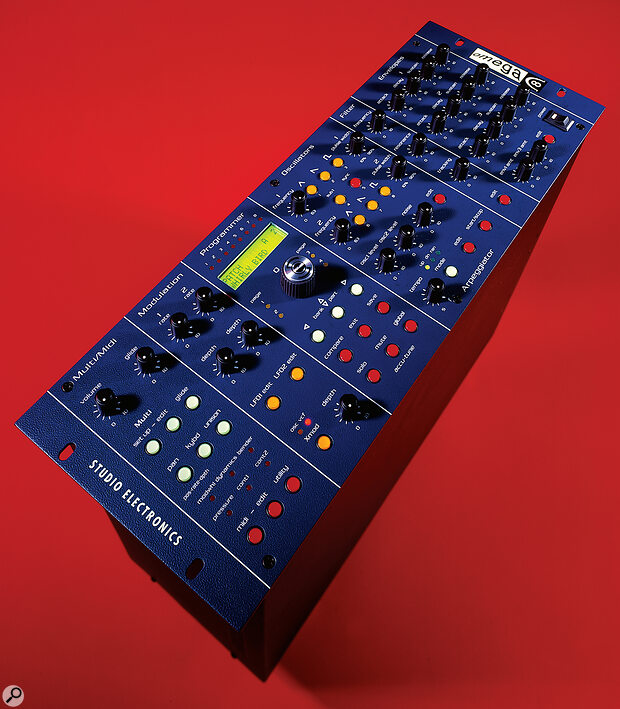 The long‑awaited Omega 8 promises much, even if its feature‑set is not yet complete. Gordon Reid takes a first look...

If you remember The Hitchhikers' Guide To The Galaxy, you may recall the classic scene in which our heroes inadvertently transform a pair of rapidly approaching nuclear missiles into a whale and a bowl of petunias. Since this occurs some miles above a planet's surface, the surprised fauna and flora then descend swiftly, the whale naively wondering whether the approaching ground will be friendly, while the bowl of petunias merely offers the comment, "Oh no, not again!" The author, Douglas Adams, suggested that if we could ascertain why the petunias made this remark, we might discover a lot more about the universe in which we live. Well, I'm not one for weighty matters, but, for reasons that will become apparent, I'm beginning to understand how the bowl of petunias felt.

Now let's talk about the Studio Electronics Omega 8. I knew about this synth as long ago as mid‑1998, at which time I heard that it would be a DSP‑free, multitimbral, rackmount analogue module with discrete oscillators and filters, plus a host of knobs and switches. In late 1998 it seemed that Studio Electronics would show the Omega 8 (or one of its more diminutive brethren, the Omega 5 or Omega 2) at the 1999 NAMM show, but it did not appear, even in prototype form.

Yet even then, the hype was remarkable. There were promises of elaborate MIDI control, dynamic signal processing, and expansive modulation, with sound creation and manipulation that could "very well exceed the boundaries of your imagination" (Yurgh!). Other hyperbole included "apparitional pads" (huh?), "foundational basses" (what?), "revelatory leads" (whatever they are), "electrosonic drums" (now I'm really confused), "other‑worldly" sound effects and "utterly massive synthetic soundscapes... for today's highly charged musical ecology." Despite such marketing crap, the Omega 8 has continued to tweak my interest, perhaps because I've long been a fan of the same company's SE1 monosynth — and now I've had the chance to play with an early production model for a few days. So, what's it like? Let's start at the beginning...

Both Studio Electronics and their UK distributors Turnkey describe the Omega 8 as a 'pure' analogue synth with two syncable VCOs, a sub‑oscillator, simultaneous output of each of its three waveforms, and a noise generator for each of its eight voices. So far, so good, but what about the "accurate but not perfect software routine of computer‑corrected oscillator tuning"? This is an attempt to eliminate the supposed sterility of conventional DCOs and digital sound generation systems by introducing a slight variation between voices. Does it work? Well, sort of, and we'll cover this in more depth in the full SOS review in a couple of months.

In the same light, the VCF promises much, with multimode 12dB/octave and 24dB/octave options modelled on Oberheim SEM and Moog filters respectively. Furthermore, the company has promised two 'plug‑in' filters that will be modelled on the Roland TB303 and ARP 2600. These filters are, in my opinion, well chosen. No matter what you think of the 303 (my views are unprintable within a quality publication) its sound has found favour with the dance crowd all over the world. In contrast, early ARP filters are sublime, and everybody should have the opportunity to recreate the sounds of a white‑face Odyssey, a Soloist, or the earliest models of 2600.

Each of the Omega's eight discrete oscillator/filter boards offers an independent output. This means that in many ways, you can treat the instrument as eight monosynths. Each board also sports an audio input, so you can regard each as a filter box for treating external signals.

That's enough about the spec; how about a subjective opinion? Well, removing the Omega 8 from its box is a highly pleasurable experience. This thing is chunky, sexy and, in some indefinable way, feels right. Clearly, its cosmetics are derived from those of the SE1 and, for my money, that's no bad thing. Hooking it up is a doddle, and then it's simply a matter of selecting a MIDI channel and playing. Indeed, I didn't even bother to scroll through the factory patches, I just started programming my favourite analogue sounds from scratch.

Firstly, it's worth noting that the Omega 8's operating system is a mixture of directly accessible (ie. knob‑driven) features, coupled with a shallow menu system controlled by the Q knob. This user interface is similar to that of the SE1, so I found no difficulty navigating through it, and I doubt that anybody else will, either.

The next thing that I discovered (and a problem fully described in the 'Preliminary Operation Manual v1.0') is that many of the front‑panel knobs suffer from serious 'stepping'; apparently there is currently a deficiency in the rate at which the microprocessor scans the panel. The second and third things I discovered (both of which are also admitted in the manual) are that (i) the Omega 8 occasionally crashes if you edit it whilst playing, and (ii) that voices will sporadically disappear on occasion.

Studio Electronics has promised that it will rectify these problems in future software updates. Currently, this means that you will need to open the instrument, temporarily remove the processor board that controls much of the synth's activities, and install a new EPROM each time you wish to upgrade the instrument.However, the company is apparently aware that this might be unacceptable to some users, and has decided to replace the existing system with one that will accept downloadable software updates. I'm relieved to learn that this should become available before a significant number of Omegas are sold to end‑users.

Sonically, the Omega 8 is clearly a powerful analogue synth, and it can sound excellent. Nevertheless, I was surprised by my first impressions of its character. I was expecting something raucous in the style of a Memorymoog, an Oberheim OBX, or even a Rev 1 Prophet 5, but I found it to be clean and precise, much more like a Roland Jupiter 8. Indeed, with its velocity‑ and pressure‑sensitivity, I could on occasions have mistaken it for a Prophet T8. Perhaps this is not surprising, because the T8 is another instrument with analogue oscillators and analogue filters coupled to digitally generated everything else. But hey...! Who's going to complain if their synth is compared favourably against a Jupe or a T8? Nobody, I hope.

Further playing and programming showed that my first impressions did the Omega 8 a mild disservice. It is capable of clean and sparkling sounds, but a bit more experimentation revealed a darker character that I liked very much. I also discovered just how fast the envelopes can be. In stark contrast to the sluggish software‑generated envelopes on the Prophets, these give the Omega 8 a great deal of dynamic 'snap'. This meant that, by the time that I had to hand back the preview instrument, I had emulated many of my favourite analogue synths — including, I was delighted to discover, the Yamaha CS80.

At this point I would like to tell you about the Omega's arpeggiator and multitimbral capabilities, but I can't. Despite the fact that the Omega 8 is already on sale in the States and in the UK, these important features are absent without leave, and not due to appear until a second software revision later in the Spring. I'm beginning to see a pattern emerging here...

At its original projected price of around $3,400 (approximately £2,000) the Omega 8 would have been far from cheap in 1999, but certainly more affordable than the Jupiter 8, CS80, or T8 were in their days. Unfortunately, the provisional price has leapt up and, in February 2000, you are looking at an outlay of $5,000 (in the USA) and a disproportionate £4,000 in the UK for the full 8‑voice version. (If that's a bit too steep for you, you could consider a mere $4,000 for the more limited 5‑voice version.) Add around £100 each for the TB303 and ARP 2600 filters when they appear, and you're looking at a considerable investment for what is, in all honesty, a synth of limited applications. That doesn't mean that it's sonically limited — far from it — but in 2000AD it's unlikely that anybody is going to use an 8‑voice polysynth as their primary sound source.

On the other hand, if somebody offered a mint SE1 to me for just £500 I wouldn't hesitate to buy it. How about an ATC1 (which shares its dual‑oscillator architecture with the Omega 8) for the same price? Maybe, maybe not. Would I pay eight times as much for eight ATC1s? Ah, that's a good question, but the answers to this and many other queries will have to wait until the Omega is fully implemented.

Despite this, I'm already satisfied that the Omega 8 has the potential to be a superb (if expensive) addition to anybody's studio. This means that I'm genuinely looking forward to conducting the full review when the hardware and software is 'finished'. I just hope that anybody buying the product today is aware of the current limitations, because I would hate anybody to spend £4,000 only to discover — once the cash is handed over — that the Omega is still under development. 'Disappointed' would be an understatement...

So there we have it. A small company has designed and built a potentially superb synthesizer but, for whatever reason, has decided to offer it for sale when it is only 50 percent functional. It all sounds painfully familiar, doesn't it?

Now I understand the bowl of petunias.

The Omega 8 provides three LFOs per voice, each with six waveforms. Furthermore, two of the LFOs offer three assignable destinations with independent control of LFO depth. But what's this? A little delving shows that a Motorola microprocessor generates the LFOs as well as the Omega's three envelopes. With apologies once again to the Hitchhikers' Guide, I have to say that this represents a new meaning of the words 'pure analogue' with which I was not previously acquainted. Now, there's nothing wrong with an architecture that combines analogue oscillators and analogue filters coupled to software‑generated LFOs and envelopes. Indeed, two of my favourite synths have exactly this architecture: the Prophet 600 and the highly revered Prophet T8. No... my dissatisfaction is with the hype that seeks to occlude this point.