The B1 may seem like just another cheap Chinese mic, but it punches well above its league.

Studio Projects are part of the PMI Group, which now owns the Joemeek brand and distributes a number of other products including Toft Audio Designs. They're often seen at trade shows with their range of Studio Projects mics set up alongside industry-standard high-end models, where the visitor is invited to compare them, and they openly admit that their aim is to capture the essence of the German microphone sound at an entry-level price.

To achieve this, their mics are designed in the USA by Brent Casey, and then built by 797 Audio in Beijing using high-quality components, including Wima capacitors. 797 was the original government number for the facility in the days when it was under government ownership, but today 797 Audio build mics and capsules for a small number of different companies around the world.

Rather than trying to disguise the fact that these mics are made in China, Studio Projects put the 797 Audio logo on all their mics, in part I'm told to ensure better quality control from the factory as a result of their name being on the mic. Each microphone is tested at the factory and again by Studio Projects in California prior to packing and dispatch.

The B1 is the least expensive mic in the range and offers a fixed-cardioid pattern with no pad or roll-off switches. The centre-terminated, large-diaphragm capacitor capsule (approximately one inch in diameter) requires a standard 48V phantom power supply and feeds a FET cascade input with a direct-coupled transformerless output.

The diaphragm itself is made from Dupont Teijin three-micron, gold-evaporated mylar. Housed in a satin-nickel plate-metal enclosure with gold-plated XLR connector pins, the B1 has a fairly wide cardioid response that remains tonally true beyond 45 degrees off axis. As with all cardioid mics, it also exhibits a proximity bass boost when used up close, and this can be used creatively to add weight and warmth to close-miked vocals.

A dual layer metal basket protects and screens the capsule, which is itself shockmounted, and the Studio Projects logo denotes the live side of the mic. The B1 comes complete with shockmount, foam windshield, and soft plastic storage pouch, but to keep the cost down it is supplied in a cardboard box rather than a fancy camera case or wooden box.

I'm unsure what the foam windshield is supposed to be for, as these things are usually pretty ineffective against popping and also tend to compromise the high end, though they can be useful in reducing wind noise when used outdoors. I feel it could mislead the inexperienced user into thinking they can work without a separate pop shield, which when recording vocals is most definitely not the case with any microphone of this type.

Unusually, the shockmount features a custom plastic moulding that clips to the lower end of the mic suspended within a metal ring using standard fabric-covered elastic belts. The mic is a tight fit in the cradle, but once it's in, it's not going anywhere!

My practical tests confirmed that the B1 is more than adequately quiet, and similar in sensitivity to the other large-diaphragm models I used for comparison. It has an open, subjectively uncoloured sound, but with a welcome density at what I tend to think of as the 'chest' frequency of male vocals. If there is a presence peak, it is suitably subtle. Tube mics and some compressors also create this impression of density, and it sounds particularly flattering when you're close-miking vocals.

However, one very pleasant surprise was the way this mic interpreted acoustic guitar. Most capacitor mics will render a fairly clean and natural-sounding recording of an acoustic guitar if correctly positioned, but this model added some flattering weight to the sound and seemed less critical of positioning. It also seemed to smooth out the rough edges without losing any detail — the top end comes over as open and detailed, but without being harsh or scratchy. Although the overall effect may not be quite so refined as that of a £1000 mic, it's really not as far behind as you might imagine.

Given the level of performance of which this microphone is capable, I'd say that it would suit the vast majority of home-studio vocal or instrument applications (including guitar amplifiers), and if you can't get a good sound out of it, then the chances are that the room acoustics or the mic position are at fault, not the mic itself. Clearly it isn't the best mic in the world, and you wouldn't expect it to be for only around £70 in the UK, but I'd be very happy to use it as a main vocal mic for serious recording projects. There's nothing not to like — the tonal balance is nice, the off-axis response is more even than most mics manage, and the build quality is solid enough. The budget Chinese mic market is hugely competitive, but the B1 is one of the few mics that has made me sit up and take notice. In fact, I'm seriously thinking of adding one to my collection, if only for what it does for guitars! 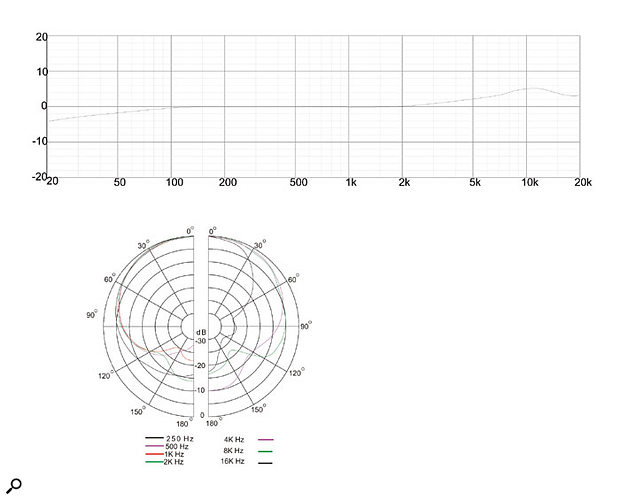 The frequency response and polar pattern diagrams showing the technical performance of the Studio Projects B1.

No response curves are provided with this microphone, though I managed to get some from the designers that show the mic to have a very subtle presence lift centred at around 10kHz combined with a gentle bass roll-off below 100Hz. The published frequency response specification simply says '20Hz to 20kHz'. The noise level (EIN) is 12dBA (giving a signal-to-noise ratio of 82dB), which is slightly quieter than is typical, and the sensitivity is -34dB (reference 1Pa), which is pretty standard for this type of mic.

The maximum SPL is an impressive 137dB, which is higher than normal and certainly enough for any conventional vocal, acoustic instrument, or amp-miking work, which is what the mic is really designed for.

The B1 is one of the cheaper large-diaphragm capacitor mics available at the moment, but there's nothing about the sound quality that gives away the price.