The Super Vee Blade Runner vibrato unit can be retrofitted to most Fender Strats and copies thereof. There are a couple of significant differences between this and the standard Fender tremolo, though. 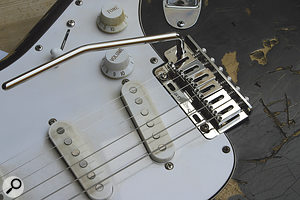 The slots at the front line up with the outer four holes in a six‑screw bridge with enough leeway to accommodate the various versions, but the front edge of the plate screws hard down to the guitar body. The baseplate comprises two parts: the 'screwed down' leading edge is joined to the main section via a thin piece of sprung steel (the blade), and this bends to provide the necessary movement without incurring friction. Highly‑polished block saddles further reduce friction. Aluminium is used, as tests apparently showed it gave more sustain than the alternatives.

Another welcome feature is the screw‑in arm, which has a pin protruding from the body end that locates in a damping mechanism in the block, to eliminate slop, and to keep the arm in position when released. You can make the arm rotation stiffer or looser using a screwdriver.

On a 'bitsa‑caster' Strat clone, installation added two minutes to the time it took me to change the strings. With new strings and minor adjustments to the saddles for height and intonation, I was ready to go.

In use, the guitar had a more lively sound from the outset, and there was a little more sustain. The vibrato felt much like a Fender model, but with no unwanted play, and it seemed less prone to creaks and groans. Tuning was very stable, once I'd polished and lubricated the nut on my guitar, and I felt very comfortable with the upgrade. Having a livelier tone, no floppy arm, no creaks and better tuning stability are real benefits when you're recording. Paul White