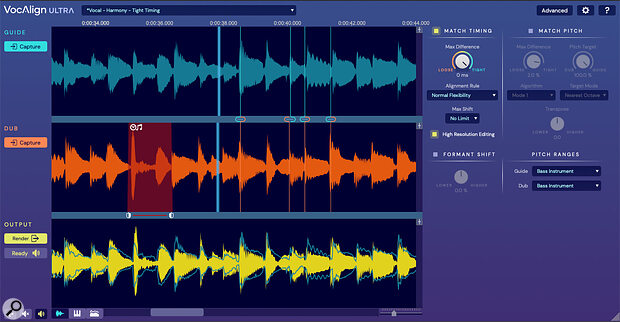 After a major overhaul, is Synchro Arts’ VocAlign still an essential part of the vocal producer’s toolkit?

The raison d’être of Synchro Arts’ VocAlign is simple: to match timing between vocal recordings. Originally, it was an offline Pro Tools plug‑in targeted at post‑production tasks such as ADR (automated dialogue replacement). Over the years, it’s been made available in other formats, and is widely used for sung vocals as well as instrumental sources. Its makers now estimate that 80 percent of VocAlign users are music producers.

Synchro Arts also offer the standalone Revoice Pro, which includes all of VocAlign’s functionality plus detailed pitch‑correction, the ability to create fake double parts, and much more. Over the years, new features have tended to make their appearance in Revoice Pro; the VocAlign feature set has remained simpler, to retain the emphasis on speed and efficiency. Now, though, Synchro Arts have embarked on a thoroughgoing overhaul using the latest Revoice Pro algorithms. VocAlign Ultra can now match pitch as well as timing, and the user interface has been completely revamped. It looks and feels much more modern, with a more conventional waveform display that features colour‑coded pitch and waveform traces. The plug‑in window is now freely resizeable, which is great because you often need to view it alongside the relevant material in your DAW’s arrange page.

VocAlign Ultra remains a plug‑in rather than a standalone application, and there are three basic ways to use it. In DAWs that support ARA, VocAlign Ultra can edit audio directly within the arrange window. In Pro Tools, it can be used as an offline AudioSuite plug‑in. And in any DAW that has VST3 or AU support, VocAlign can live on an insert slot on the track whose timing you want to adjust. In this case you’ll need to arrange a side‑chain feed from the reference track and capture the audio in real time before you can align it.

In VocAlign‑speak, the reference audio is known as the Guide and the audio to be corrected as the Dub. The ARA version can capture and process multiple Dub parts in one go (with the same settings), but AudioSuite is restricted to a single Guide and Dub. So if, for instance, you want to align mutiple backing vocal takes, you’ll need to work on each one in turn.

Open the AudioSuite plug‑in and you’ll see three ‘lanes’: Guide at the top, Dub in the centre and the Output (corrected Dub) at the bottom. The first step is to capture audio into the Guide and Dub lanes by making selections within the Edit window and hitting the appropriate Capture button. As soon as you do this, VocAlign generates an Output part; as you change parameters, this is continuously recalculated so you can hear the results more or less in real time. The waveform of the Guide part is superimposed in blue outline as a sort of ‘target’ over the yellow of the Output, and you can choose any or all of the three parts to be auditioned. A Basic mode displays only three controls to the right of the lanes, but the more comprehensive Advanced mode isn’t at all scary. There’s also a well‑judged selection of presets, which will often do the job without adjustment.

If you have multiple takes to correct, you can easily use Pro Tools keyboard shortcuts to move the selection up or down through the tracks, hit Capture Dub again and repeat the process. It’s remarkably efficient, so much so that it’s often easiest simply to VocAlign everything without even bothering to audition the results, only changing the settings if something leaps out at you later.

VocAlign Ultra is one of those products that you quickly begin to take for granted.

The core Match Timing function can be fine‑tuned in several, mostly self‑explanatory ways. For instance, you can set a limit on how far VocAlign is allowed to move any part of the Dub, and you can choose Alignment Rules which weight the algorithm to prefer, say, more or less time adjustment and editing. The most important parameter is Max Difference, which tells VocAlign how lenient to be with natural timing variations.

New for VocAlign Ultra is a Match Pitch function inherited from Revoice Pro. This isn’t pitch‑correction as such, but a way of adjusting the similarity of pitch between takes. So, for example, you could apply Melodyne or another pitch‑correction processor to the first in a stack of harmony vocals, bounce the results and use that as the Guide for the others. The core pitches of the notes are preserved; what’s matched is the variation. It’s also possible to apply basic transposition and formant shift to introduce artificial variation into those stacked vocals, helping make one singer sound like many.

Finally, the narrow horizontal areas between the Guide, Dub and Output lanes allow you to define Sync Points and Protected Areas, which are useful when there are significant differences between the Guide and Dub parts. For example, a backing vocal might only double some of the words in the lead part; if VocAlign doesn’t automatically spot this, you could click and drag to create a Protected Area in the parts that are supposed to be empty. Or if phrasing variations mean that major timing shifts are required, you can help VocAlign out by creating Sync Points to indicate which words correspond between the parts. 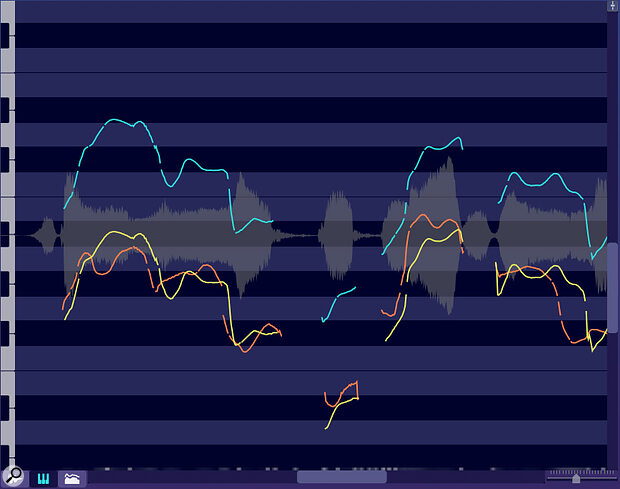 Matching the pitch variations between two harmony parts. The orange trace shows the original pitch variation in the Dub. The yellow is the output, matched to the blue Guide.

Two alternative views make it even easier to visualise what VocAlign is doing. One retains the waveform view of Guide and Dub, but superimposes a coloured display showing the ‘energy’ of both; this is close to what previous versions of VocAlign showed, so should feel familiar to upgraders. Pitch‑matching, meanwhile, is aided by a new display (shown above) which shows colour‑coded pitch traces for the Guide, Dub and Output parts. Along the bottom, a greyscale ‘intensity’ pictogram highlights hotspots where VocAlign is doing a lot of work, and which should therefore be checked for processing artefacts.

VocAlign Ultra is one of those products that you quickly begin to take for granted. It does what it does so well, and with so little fuss, that you don’t always stop to think exactly how much tedious editing work it is saving you! In its wheelhouse, working with sung and spoken vocals, it is unbeatable — to the point where you’d often struggle to match through hours of manual editing what it achieves instantly. Instrumental or polyphonic sources can require a little more manual input to prevent glitching or warbling, but it takes only a few seconds to set up the necessary sync points and protected areas, and VocAlign will still save you lots of time.

For many of us, then, the question to ask is not “Do I need what VocAlign does?” but “Should I get VocAlign Ultra, or Revoice Pro?” The latter is obviously the more capable of the two, but I actually think that many will be better served by the former, especially if you already have an existing pitch‑correction tool that you know and like. VocAlign’s ability to work as a plug‑in is a big plus, but to my mind, its streamlined nature is an even bigger positive. Revoice Pro is incredibly powerful, but it presents a learning curve. You’ll be up and running with VocAlign Ultra straight away, and unless you have a DAW like Cubase Pro or Cakewalk that has similar functionality built in (and even then, neither of those will do pitch-matching), there’s simply no other way to do what it does.

If you do a lot of work with stacked vocals, VocAlign Ultra will pay for itself very quickly indeed!