In the world of live sound, the tablet revolution is much more than just hype: it really does have the potential to turn front-of-house mixing on its head...

Way, way back in 2007, Sound On Sound had a sister publication, called Performing Musician magazine, which focused on live-sound engineering and all the gear associated with it. In the October issue of that year we ran a speculative article about how people might, in the future, be mixing their live shows using cutting-edge, compact, wireless computers fitted with touch-sensitive screens.

Now, if you've ever looked through an archive of technology-related magazines, you'll know that this kind of article can often seem quaint, if not downright absurd, just a few years down the line — a phenomenon that even SOS is not immune to. Long-time readers might remember us hailing Yamaha's mLan protocol as the future of digital audio, or offering advice on how to cope with the disastrous effects of the Millennium Bug.

On this occasion, however, that article proved to be eerily prophetic. It is now not only possible to mix a show while walking around the venue holding a wireless tablet computer, but it is becoming remarkably common — and also more affordable, as the price of the required hardware continues to plummet.

But beyond the obvious appeal of controlling a sound system with something that looks like a Star Trek-style teleportation device, what reasons are there to make the jump to tablet mixing?

Traditionally, front-of-house mixing positions have always been static: the mixer is where it is, and you do all your mixing from the one spot. This obviously has its disadvantages, in that the mix might sound perfect where you're standing, but compromised acoustics (and the sound coming from the backline) might mean it sounds absolutely terrible for audience members in different parts of the venue. Having the freedom to walk around while mixing means you should be able to arrive at a mix that sounds good everywhere.

Divorcing the means of control from the mixer itself has one other major advantage, however, that of being able to leave the mixer on stage. Since all the audio signals (mics, keyboards, DI boxes and so on) are coming from the stage, it makes a lot of sense to have the mixer, with all its input connections, there too. And for smaller gigs, where the monitors are being fed from the auxiliary outputs of the front-of-house desk, this will also mean shorter cable runs between the desk and foldback wedges. By keeping the desk on stage and connecting your sound sources and monitors directly to it, you can completely eliminate the need for a bulky stage box and multicore.

So mixing front-of-house using a wireless tablet has its advantages — but why stop there? Once you've made the arrangements to connect wirelessly to your mixer, it is but a small leap to connect other devices too — for example, a secondary tablet for controlling the monitors. Most of the iPad-controllable mixers currently available can be simultaneously controlled by multiple devices, sometimes even with the option to 'lock' certain parameters to specific iPads, so that a monitor mixer and FOH mixer won't be able to undo each other's changes, for example. In fact, there's even a growing number of apps for the smaller iPhone and iPod Touch that are specifically designed for controlling monitor mixes — so as well as rendering your old stage box redundant, a tablet-controlled mixer could also easily replace an entire personal monitor-mixing system (some of which can be very expensive indeed).

As ever with such new technology, however, there are some pitfalls, though nothing too serious, provided the proper precautions are made. For example, you would do well to make sure your tablet computer is fully charged before each show, lest you run out of juice mid-gig and lose control of the mix! Likewise, a little preparation on the Wi-Fi front could pay dividends. Pretty much all tablet-controlled mixers provide their wireless connectivity via wireless computer networking technology, which has the boon that it aids compatibility, but the disadvantage that, as Wi-Fi hotspots pop up like mushrooms, the potential for interference is greater. If you take a little time to, for example, select an uncluttered Wi-Fi channel, and give your mixer a recogniseable network ID, you'll find it that much easier to connect your tablet come showtime. 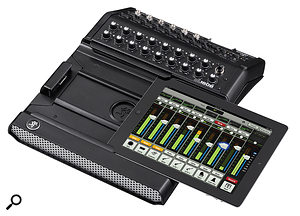 Mackie DL1608Thinking of making the jump to Wi-Fi mixing? Check out our pick of the currently available options.

The DL1608's top panel has a slot for housing an Apple iPad, and an app that provides access to the mixer's DSP functionality. It has 16 mic inputs, six auxiliary line outputs, a stereo mix out and a headphone socket. On the processing side, each input channel can be treated with a gate, four-band parametric EQ and compressor; all the outputs have access to their own compressor and 31-band graphic EQ; and a variety of reverb and delay treatments are accessed via per-channel aux sends. With a wireless router connected to the mixer, the iPad can be used remotely via Wi-Fi. 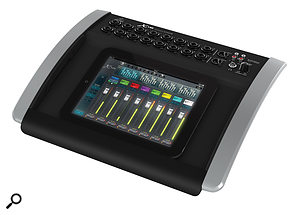 Conceptually very similar to the DL1608, Behringer's X18 features 16 preamps derived from Midas designs, and has six aux outputs in addition to the L/R mix outs. Usefully, the preamps are all digitally controlled, which means that mic-gain settings, as well as filter and phantom power status, can be saved to the desk as part of the recallable settings. The X18 also has a Wi-Fi router built in, which means you can control it remotely with no extra hardware needed.

Looking not unlike a simple stage box, the uMix 24 has 16 mic inputs and eight line ins, and a total of 10 analogue outputs (eight auxes plus the stereo out). Unlike the other mixers here, it's not controlled via an app: instead, you use a browser, running on any platform (an iPad, an Android device, or even a computer), to communicate with and control the DSP within. A Cat 5 socket is present on the mixer, allowing you to chain multiple uMix 24s to achieve a higher channel count, and an optional card endows the mixer with multitrack recording and playback functionality. The range also includes the smaller uMix 16 and uMix 12, as well as the uMix Mini, which SM Pro claim is the cheapest digital mixer in the world! 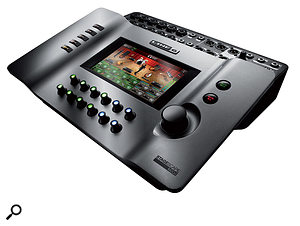 Though best known for their guitar-amp modelling hardware, Line 6 make a range of live-sound PA gear, including this unusual digital mixer. The StageScape's big selling point is ease of use: its UI is tailored towards people who don't have a traditional grounding in live sound, and so instead of complex mixer screens, it uses graphics and visual representations of the various musicians and monitors on stage. It can also, however, be set to 'advanced' mode, which presents a more familiar mixing interface. When partnered with Line 6's own StageSource speakers, it is also able to automatically sense when the speakers are being used as mains or monitors, and will adjust their output accordingly. 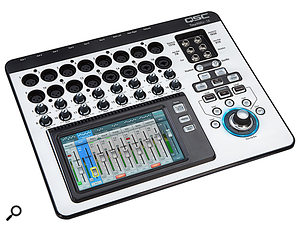 The TouchMix 16 is a 20-input mixer (of which 16 include preamps), with a total of six aux outputs. Unusually, the auxes are all capable of powering in-ear monitors directly, without the need for a separate headphone amp. The mixer's top surface includes its own colour, capacitive touchscreen, but can also be controlled from an iPad via QSC's Remote Control app. As well as the usual DSP (for mixing, routing and effects), the TouchMix 16 can also perform direct-to-disk multitrack recording.