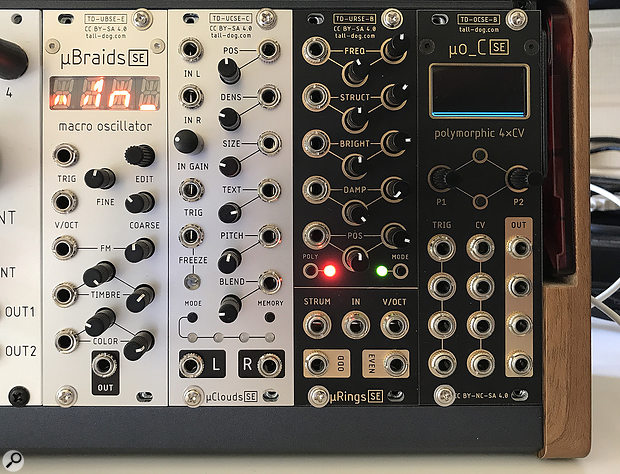 Tall Dog are a US company with no fewer than four new modules to tickle our fancies. If that seems ambitious for a first outing, a closer look reveals they are actually re-engineered versions of well-known modules. Reduced to a mere 8HP each, in some cases they are 'legacy' gems brought out of retirement. The current list includes petite versions of Mutable Instruments' Braids, Clouds and Rings plus an equally titchy Ornament & Crime (o_C), the multi-purpose, app-based CV processor.

Although open–source-based, requiring just a credit to be used — even commercially — Tall Dog believe in going beyond those terms. Not only do they contact the companies concerned at the beginning of development, they offer a donation for each unit sold. The end result is wider availability of some of the coolest entries to the modular world in recent years. Inevitably, the size reduction, especially in the case of the MI modules, means you have to deal exclusively with 'knobless stalks' and a generally less enjoyable interface. But, for some, small trumps all when it comes to case-cramming.

These modules are already well-established in the Eurorack community, so rather than cover them in detail, I've opted for functional summaries and thoughts on their redesigned format instead. Since the fabled granular processor Clouds was one of my early 'must have' modules, Clouds seemed a suitable place to begin.

Clouds transforms incoming audio into grains — tiny pieces of sound that can be fluidly manipulated and pitch-shifted to generate stuttering effects, glitches and dense swarms of noisy, freaky, distinctive atmospherics. Since I've have the Parasites alternate firmware running in my own, this was a rare opportunity to compare old and new — and to be reminded just how well the original code holds up today. Tall Dog guarantee full compatibility with the legacy version, so you can load alternate firmwares too.

It must have been quite a challenge to fit all the knobs and buttons into so little space but, despite the complexity, the interface doesn't feel massively compromised. So while it sometimes isn't quite as easy to home in on a specific position of the texture or size knobs, this can be considered a small price to pay for access to the ambient wonderland that is Clouds. With Mutable's own version withdrawn awaiting a fresh development, I can imagine this being a desirable addition to many systems.

Moving on, Braids is based on a Mutable module that was so deep and feature-packed that many users were intimidated by it. Its multi-algorithm approach offered models of traditional synth oscillators, vowel sounds, percussion, wavetable synthesis, physical modelling and more. Although replaced in the Mutable catalogue by the more direct and approachable Plaits, Braids was based on entirely different algorithms and therefore had its own range of sounds and textures.

Despite its age Braids retains a broad appeal and offers a surprising wealth of control from just a couple of knobs (Timbre and Color) whose functions vary according to the selected algorithm. Here, the small amber screen does a perfectly adequate job but I did wonder whether the reduction of both coarse and fine tuning was a shrinkage too far. They're well-positioned though and it's unlikely you'll touch them accidentally during performance.

Rings is a current Mutable Instruments module, so Rings' potential appeal is likely to be based primarily on size. It's still relatively rare to see polyphonic Eurorack modules and Rings is notable for offering up to four notes — not individually accessible but able to ring together, decaying like those of plucked strings or pianos. For more info, check our review from July 2016.

Of the entire Tall Dog range, it's probably this module that suffers the most from spaghetti syndrome, ie. it can be a real struggle to reach the controls due to the proximity of patch cables. However, the design very sensibly places the regular controls down the right–hand side and the CV pots in the middle, so maybe the main drawback is actually that single, wide-ranging tuning control. The sound, however, is authentic — and fabulous — so it really boils down to that reduction from 14HP to 8HP.

Lastly, of all the review modules, only o_C was unknown to me. It turns out to be a powerful and flexible module sporting four CV inputs and outputs, with associated trigger ins. Its functionality is derived from internal apps, the first of which is a digital version of the classic analogue shift register — in essence a multi-output Sample & Hold. Also present are pitch and chord quantisers, a wavetable LFO, quad envelope generators, various sequencers and unusual modulation sources, plus a set of handy utilities. Plenty to explore, in other words.

The screen is small but clear and can even display waveform graphics and the like. I would, however, have preferred a larger, more detailed manual to help in getting started with the included apps. In common with the rest of the range, you must find the original manual yourself online. Fortunately, assistance is provided in the small accompanying booklet.

The o_C stands out as the module that suffers the least from Tall Dog's size reduction regime — it's a compact powerhouse of CV functionality. Should you manage to exhaust all it has to offer (I didn't), alternative firmware is easily located and the list includes some mouth-wateringly exotic voltage-related tools.

Tall Dog's range is available in either satin silver or a rather fetching black and gold finish. Each is slim, stylish and skilfully miniaturised, and with an advantage many newcomers lack: familiarity.