Always unconventional, Teenage Engineering's latest instrument is a battery-powered multimedia studio that will fit in your pocket.

I'd normally avoid clichés like 'hotly anticipated', but it was bordering on tragic how often I visited the OP‑Z's teaser pages during its development. Would this be my dream portable sequencing workstation? Certainly, the OP‑Z fits the bill as a supremely pocketable multitrack drum machine and synth. But Teenage Engineering, it would seem, had an even broader vision for a handheld device from which you could orchestrate a full multimedia performance. Yes, it's guano crazy.

At its heart the OP‑Z is a multitrack sequencer. Teenage Engineering's iconic debut, the OP-1, is a sampler and synth with versatile (though often esoteric) sequencing capabilities, but it's monotimbral and relies on a built-in audio recorder for layering parts.

The OP‑Z takes a much more familiar pattern-based approach, with a sequencing workflow that has more in common with the Pocket Operators than the OP-1. There are 16 tracks, each with different roles. Four trigger drums or other samples, another four are synth tracks. The other eight are for controlling effects and performance variations, and more unusually, lights, motion graphics and animation.

You can use the OP‑Z stand-alone, or pair it to an iOS or Mac app to call up an interactive visual UI for the sound modules and sequencer, and to unlock the animation and graphics features. This makes the OP‑Z much easier to use and learn. However, if you memorise the colour-coding and shortcuts, you can wean yourself off the screen if you prefer.

As well as wireless comms, the tiny slab of injection-moulded plastic offers physical connectivity via a mini-jack audio output. This will drive headphones or a line-level input and pumps out ear-splitting levels. The only other standard connection is a USB-C port that can be used to connect to a computer, plug in MIDI devices directly, and charge the internal Li-ion battery. Further connections can be added via optional modules (see the 'Super Breakout' box).

Out of the box, the OP‑Z's physical connectivity is limited to a USB–C port and a 3.5mm audio output. 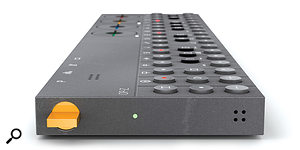 The yellow knob on the left-hand side doubles as a power switch and volume control.The OP‑Z stores 10 projects with 16 patterns in each, and most of the memory slots come pre-populated with demo songs. These proved a helpful resource while getting comfortable with the navigation system, which uses a master button on the top edge of the device combined with the step and note buttons to recall projects and patterns.

The demo projects showcase the OP‑Z's potential: there's house, hip-hop, drum & bass, and a jaunty electro-pop tune that must surely have come from YouTuber Cuckoo. The sound quality of the synths, samples and effects are so good that at times it feels slightly unreal that the source is this tiny box. It's a world away from the lo-fi Pocket Operators.

The OP‑Z's panel focuses on one track at time. Four continuous encoders control various aspects of the track, affecting the sound and some sequencer parameters like note length and quantisation. The encoders are flush with the surface and are spun like jog wheels with a fingertip. They bank through different modes, with the current page indicated by colour on the adjacent LEDs. The LEDs also show parameter values with brightness.

Unlike either the Pocket Operators or OP-1, there are separate button strips for step sequencing and note playback. Step triggers can be added via the sequencer/track buttons, or you can record in real time from the note buttons. Holding a step button and then a note button will enter a step with that note value.

My main concern before I got the OP‑Z in my hands was that the note keys are tiny buttons instead of keys or pads. The OP-1's keys are also small and velocity insensitive, but they are a comfortable size and oddly satisfying to play. In the flesh, the OP‑Z's note buttons are not quite as unpleasantly clicky or awkward as I'd feared. If you set the device down on a hard surface you can just about play the buttons like a keyboard with your fingertips. It's fine for ultimate mobility, but if you're at home you're going to want to plug in a MIDI keyboard.

The OP‑Z's eight audio track assignments are somewhat flexible, but some properties of the individual tracks are unique. Tracks 1 to 3 are labelled as Kick, Snare and Percussion respectively, and track 4 is for other samples. These tracks are essentially the same, set up for monophonic triggering of one-hit samples. Each note key is assigned a different sample so you can play all sounds freely when live recording. Trigs added with step keys are assigned to the most recently played sample.

In the factory sound set, track 1 is all kick samples, track 2 snares, etc. However, the iOS app lets you change the assigned sound set for each track, and you can import your own samples by connecting the OP‑Z to your computer in disk mode. I replaced a couple of the tracks with kits of mixed samples to give myself more flexibility.

Tracks 5-8 are assigned to melodic duties. They can use any of the supplied DSP synth engines, or operate as chromatic sample players, but each track has slightly different properties. Track 5 is nominated as Bass, and is monophonic. Track 6 is Lead and is three-note polyphonic. Track 7 has an arpeggiator instead of an LFO section; it plays back monophonically but each step can store a chord to arpeggiate. Track 8 is designated as Chord, and has four notes of polyphony.

There are currently eight synth engines, plus the PCM sample player. The synths have a similar vibe to the OP-1, with some unusual, bright digital flavours and physical modelling algorithms and a couple of traditional synths. Each synth only has two unique parameters to adjust. Some synths have a wider tonal range than others, but all are generally useful as basses, leads or pads, depending on the pitch and envelope you use.

Each track has a resonant filter that flips from low- to high-pass either side of the 12 o'clock position. There's a single envelope for amplitude and not the filter. All synth tracks except the Arp get a single LFO that can be assigned to the main parameters, filter, pan, or level.

Track allocation of sounds and sample sets are managed using a dedicated section in the OP‑Z app called the Configurator. Each track has a 10 slots where you can drop sound sources. You then choose from this palette within each track directly from the hardware. You can also store and recall patches that include all the modulation, filter and effect levels as well as the actual sound engine parameters. You can't change a sound in the middle of a sequence, but you can change the sounds for each pattern within a project. I got good mileage out of duplicating patterns and just changing a couple of the sounds.

Patterns are limited to 16 steps with regards to the main trig buttons, but sub-steps are possible, so you can change the playback rate (and length) of each track independently to live-record patterns that are effectively up to eight bars with respect to the project's tempo. However, you won't be able to edit these individually from the step buttons.

Swapping between your project's 16 patterns is simple, and is immediate rather than queued, with the beat position maintained. I'm a big fan of this way of working as it's a quick shortcut to throwing in variations and fills.

Some additional expression can be added with the rubber pad on the front edge of the unit: it's a bi-directional, pressure–sensitive input that acts as a pitch–bend controller. It can also adjust the velocity of steps in the sequencer. Control changes can be recorded in real time, or sequenced per-step using the 'Swedish method' of holding a step while dialling in a parameter setting.

While the basic sequencing process is pretty straightforward, other operations such as duplicating or clearing a pattern or track require button combinations or sequences that you'll need to learn and memorise. I repeatedly had to look up things like how to change the track and step lengths.