Does 16 steps sound a bit stingy? Well, you can create longer loops by increasing step lengths, mixing track lengths or chaining patterns together, but the OP‑Z is packed with tricks that steer you down a different road. You can start with fewer, shorter building blocks then manipulate them to create more variation and interest than you could possibly realise with manual programming.

Hands–down my favourite feature of the Pocket Operators is the punch-in effects, and the same goes for the OP‑Z. Punch-in effects are momentary performance and sound–mangling processors. There are 12 different effects, which can produce instant variations such as ducking, repeats, loops, fills and randomisation.

Punch-in effects can be applied to individual tracks simply by holding the Shift button and playing the white key buttons. Anything you do can be recorded as part of the pattern. There's then a dedicated Punch-in track, which can apply the effects to multiple tracks at once. In this track the effects are duplicated into two groups that affect all drums or all synths.

The punch effects are so effective that for a long while I neglected their counterpart: Step Components. These are processes that you attach to individual steps to add variations, sound modulations, randomness, etc. To name just a few examples, they can trigger repeats, add glide, randomise pitch, sweep the filter or jump the sequence to a different position. Each of the 14 component processes has 10 variations or range settings, and you can stack multiple components on each step.

Spark Components are similar to Elektron's 'conditional trigs'. They can make other things happen at different time intervals, say every second or fourth bar, or randomly. Not only can Spark Components add variation to step triggers, they can also make parameter locks conditional, and even influence other Components on a step.

Song structures can be jammed in real time using the Master track, which transposes the synth sequences. The OP-1 analyses the sequences — with particular focus on the Bass track — to derive the key of your project, then offers up logical chord progressions.

Finally, a more conventional dub mix approach to variation and song building is facilitated by the Mixer page. When working on the hardware alone, the Mixer view puts mutes on the track/step buttons, and gives you level control of the Drum group, Synth group and Master. If you're using a screen you also get faders. The best bit is that you can quickly store mute groups (snapshots essentially) to the number buttons for fast recall of different track combinations. 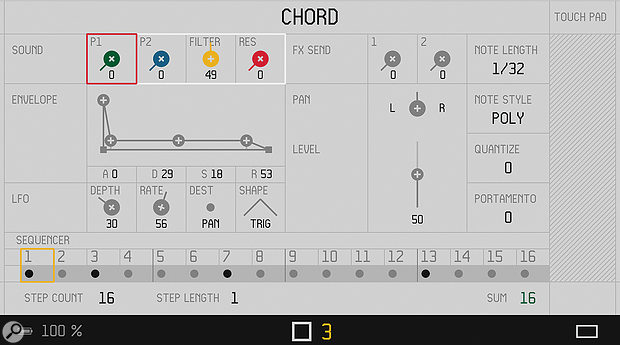 Instead of having its own screen, the OP‑Z borrows the one on your iPhone or iPad. The control app can also be used on a Mac.

Uniquely, the OP‑Z has three tracks dedicated to performing and sequencing visual elements: Lights, Photomatic and Motion. Any one of these would be an exciting and unique addition, but to have all three is kind of nuts.

The Lights track controls and sequences stage lights via the industry standard DMX protocol, basically the MIDI of lighting. Connection to lights systems can be made via an off-the-shelf USB to DMX interface like the Enttec DMX USB Pro MkII. Ten basic chase patterns can be triggered from the numeric black keys, then variations and effects are added from the white keys. The dials control the colour and brightness of lights, and the speed and direction of patterns. You can then use the OP‑Z's standard step or real-time sequencing system to automate changes. The OP‑Z previews the results using the lights on the step sequence buttons or app.

Photomatic and Motion both rely on the iOS/Mac app, and share a track on the OP‑Z, so only one can be used at a time. They are used to generate visuals which are displayed on your device's screen. Alternatively — and this is genius — you can output to a screen or projector via Apple's Lightning to HDMI adaptor, and your phone's or iPad's screen will revert to the OP‑Z GUI.

Photomatic mode displays, sequences and manipulates still images or photos. Images can be imported, or you can snap photos with your phone or iPad's camera, triggered remotely from the OP‑Z. You can grab up to 10 photo 'rolls', each with 24 images mapped to the note keys. Playing a note displays its assigned image, and you can animate a sequence on the Motion track. The encoders change properties of the images like contrast and saturation, and there are 10 punch-in effects which do things like invert or colourise the image, or step through successive frames. It's loads of fun.

Motion takes things to another level: rendering interactive 3D graphics. This uses the popular Unity game engine, programmed via a Unity toolkit TE have developed called VideoLab. To create any decent original content with this would require a significant level of expertise, but there are some inspiring, pre-built examples, one of which renders a 3D cockpit that you can rotate and zoom. Various displays inside the cockpit are representations of things happening musically in your project, such as meters for the eight audio tracks, and the sequencer position.

Often products start with a grand concept that then gets chipped away to fit a particular category or price. The OP‑Z seems undiluted by such concerns. I found myself picturing a vision board at TE HQ with sketches of the OP‑Z's archetypal user. She's a kickass futuristic electronic music busker, showing up for gigs with everything she needs in her pocket: music, lights, visuals, even the built-in mic that routes to the output and auto-activates when you hold the OP‑Z upright! (And that's just one of the things I didn't have time to get into).

Am I likely, realistically, to take advantage of these intriguing extras? Probably not often. Do I wish they'd pulled back a touch from miniaturisation and given it the more playable form factor of the OP-1? Yes. Are the OP‑Z's synths somewhat less interesting than its bigger brother's? Yes. Whatever; the thing that's kept me coming back to the OP‑Z is it's fantastic ability to take a few simple starting points and instantly turn them into an interesting, varied track using the punch-in effects, step components and master track. And all the goodness of the sequencer is great for driving external synths and apps, especially as there are so many tracks to play with.

The OP‑Z doesn't do everything, but it does a lot in a truly mobile package. It's always there, and it's always charged. As the old saying goes, the best groovebox is the one you have on you.

The back panel offers no accessible connectivity, but can be augmented by optional breakout boxes.

With a 16-track performance sequencer inside and pill-sized buttons for keys on the outside, there are compelling reasons to get MIDI both into and out of the OP‑Z. There's a good chance you're already connected to a device to borrow its screen. In return, the OP‑Z is a brilliant wireless controller and sequencer for your iOS/Mac music apps. As mutes and many of the performance effects and Step Components operate at the MIDI level, you can bring all the amazing improvisation possibilities to external instruments. The same goes if you're USB connected to a Mac or PC.

I was also keen to plug in an external MIDI keyboard for a better playing experience. The OP‑Z has the distinct luxury of being a USB MIDI host, so in theory you can direct-connect MIDI devices via USB. This is great as my cheap mini keyboard is also a USB-only device that can normally only control a computer or iPad. The OP‑Z has a master MIDI channel that routes to the selected track, plus each track has a discrete channel. Further mappings can be set up in the app.

The only problem is that the OP‑Z has a USB-C connection, and very little else does except for modern Macs. I spent days trying to connect stuff but nothing seemed to work. I tried three different USB-C MIDI hubs, Apple's multimedia adaptor, and two different cables with no luck. Eventually I discovered that the basic Apple USB-C to USB adaptor works, as well as some cheap cable adaptors. This really opened things up, and I could even connect a simple hub. It's hit and miss, and some things need power. I was surprised that the OP‑Z's internal battery was able to power an NI A49 master keyboard, but wouldn't talk to my self-powered Circuit. A useful discovery was that connecting a Retrokits RK–005 MIDI host, even without power, opened up lots of other things including the Circuit and Pocket Operator sync.

If you want the ultimate portable connectivity, Teenage Engineering are also planning expansion boards that snap in and add ports along the top of the unit. The first of these expansion modules was revealed as I was finishing up testing. It's called the Oplab Module and provides four mini-jack connectors that can add CV, gate and trigger outputs for modulars, regular MIDI in and out, and sync for Pocket Operators.

The OP‑Z is a truly unique multimedia sequencer in your pocket.