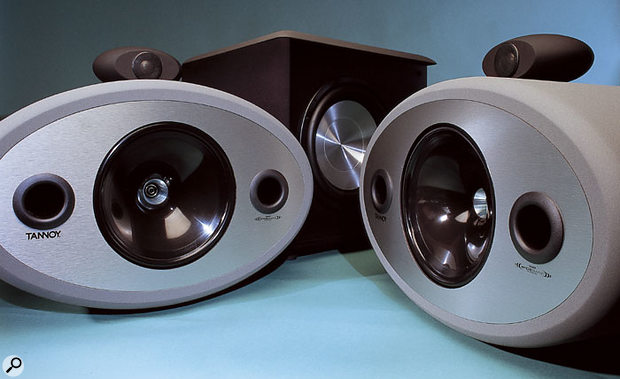 A couple of years ago the Danish TC Group bought the British TGI Group which owns Tannoy, so technology is now being shared between these two companies. The first fruits of this collaboration are Tannoy's new Ellipse IDP monitors, an update of the all-analogue units I reviewed back in SOS March 2003, but incorporating Interactive Digital Programming technology from TC Electronic, similar to that first seen in the Dynaudio Air-series speakers I reviewed in SOS September 2002. The new product represents a step forward for both technologies, so although much of this monitoring system will seem familiar if you have read the earlier reviews, there are also some distinct enhancements.

The Ellipse IDP 10 is an active monitor for nearfield to midfield use, incorporating DSP facilities for the crossover, general equalisation, room correction, and bass management. The drivers are magnetically shielded and there is an optional matching TS212 subwoofer. The speakers are supplied in master and slave versions, where the audio signals are connected to the master and passed on to one or more slaves via simple Cat-5 cables and TC Link sockets — this networking interface also carries control and configuration data. Although a complete system can be set up from the master's small LCD display, it's a lot easier to connect up a PC to the system and use the supplied IDP Soft or PC-IP software. The latter program provides more advanced features, including sophisticated alignment facilities, room-correction EQs, and channel delays.

Multiple speakers can be set up in a variety of stereo and surround-sound configurations, with or without subwoofers. The master units accept a dual-channel analogue or digital input via three XLRs. The digital input expects AES-EBU data, while the analogue inputs can be configured for full-scale levels between +9dBu and +27dBu. The dynamic range is claimed to exceed 113dB, and all the digital conversion, processing, and transmission operates at a 96kHz sample rate. Optionally, 192kHz sample rates can be supported, but by default the digital inputs accommodate standard sample rates between 32kHz and 96kHz. There is also an option to replace the two analogue input connectors with a dual AES-EBU input module, thereby allowing up to six digital audio channels to be connected to the master speaker for routing around a 5.1 surround system over the TC Link network. 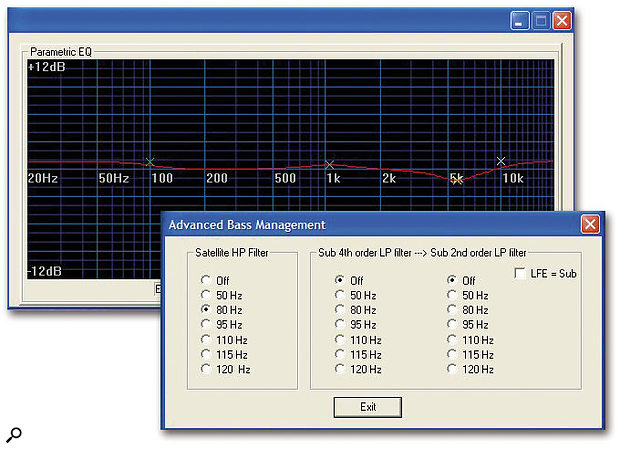 Here you can see some of the advanced setup parameters available with the bundled Ellipse PC-IP software utility.

There are two Ellipse IDP monitors currently available: the review model was the Ellipse 10 IDP, with a 254mm bass driver for which the quoted frequency response is 33Hz-50kHz (±1.5dB) and the maximum continuous SPL at the mix position (in a nearfield configuration) is 122dB. This model is intended for rooms of 80-130 cubic metres in size, with a typical listening distance of 1.5-3m. The main dual-concentric driver represents the latest generation of this intriguing design, with an injection-moulded polypropylene cone and an improved high-frequency Tulip waveguide to couple the output of the low-compression HF driver. The main driver is supplemented by a one-inch Supertweeter dealing with extreme high frequencies, and this is mounted in a pod firmly attached to the top of the enclosure. The Ellipse 10 IDP is a true three-way active design, employing three amplifier modules, with crossovers performed in the digital domain at 1.4kHz and 21kHz.

The more affordable Ellipse 8 IDP has a 200mm bass driver, and a 40Hz-50kHz frequency response (±1.5dB) with 118dB maximum SPL. Naturally, this is intended for smaller rooms, typically 50-100 cubic metres, with listening distances of 1.2-2m. This monitor is described as 'semi-active', because the bass and mid-range/high-frequency units are driven actively, while the Supertweeter is coupled passively, transitioning at 16kHz. A pair of amplifiers power this monitor and, as in the Ellipse 10 IDP, these are Class-D designs, providing the equivalent of 200W to each element of the dual-concentric driver.

Both versions of the Ellipse IDP share the same style of elliptical reflex cabinet, with two ports on the front baffle. The unusual shape is claimed to minimise edge diffraction effects thanks to the continuously changing dimensions and angles of the cabinet edges from the drivers, and it also reduces internal standing waves and panel resonances.

The smaller version of the monitor encloses a volume of 18 litres, while the larger one encloses 30 litres. The units measure 373 x 460 x 361mm and 423 x 540 x 301mm respectively, and weigh 14kg and 18kg. Both versions are finished in a grey suede paint effect, and a neoprene rubber base stops the monitor from rolling around — this can be removed for bracket mounting if required.

The internal mains power supply is a switched-mode type, accepting 100-240V mains at 50Hz or 60Hz. The mains switch is adjacent to the IEC inlet socket, and the LCD control panel carries a simple yellow status LED when the unit is powered. (The slave units have a dummy LCD panel, but with a functional status LED.) The system is designed to go into standby mode or full power-down mode automatically after preset times.

The matching subwoofer is a seriously heavy box, weighing in at a monster 51kg. It has two 12-inch aluminium-cone drivers with 1500W Class-D amplifiers, and the quoted frequency range is 25-150Hz (±3dB) with a maximum SPL of 128dB. Measuring 520 x 471 x 497mm, the cabinet encloses a volume of 45 litres and is constructed from MDF, with removable black fabric sides. Again, the internal PSU can accept any mains voltage from 100V to 240V, at 50Hz or 60Hz, and the unit has a single RJ45 connector for the TC Link network.

In most applications, the speakers are supplied in master-slave pairs (the subwoofer is always a slave). The master version incorporates the input circuitry and control panel, while the slaves have neither, being fully dependent on the associated master. In the more elaborate surround configurations there are usually more masters than slaves: one of the masters is designated the system controller, while the others are used for their additional audio inputs. The only exception to this is when you're using a single master unit fitted with the optional digital interface card — in this case the single master distributes all six input signals.

In addition to the analogue and digital audio inputs, each master speaker is also fitted with a BNC word-clock input and three RJ45 sockets (ie. standard Ethernet ports). The first two are intended as outputs for the slave speakers, while the third can be switched to function either as input or output. The slave speakers have just two RJ45 sockets permanently configured as one input and one output. Chaining any number of speakers together is pretty intuitive, but the handbook includes hook-up diagrams for all the usual stereo and surround configurations. The master unit's small backlit LCD panel displays system information and the various configuration menus — you navigate using two rocker switches, the left one providing Exit and Enter functions and the right one scrolling and adjusting parameters.

The dedicated Ellipse IDP Remote controller unit is also connected via TC Link, using any spare socket in the system. The unit provides a system volume control, as well as buttons to access three user-definable preset listening levels and four system presets. There are also mute/solo buttons for each speaker in a 5.1 configuration. Although this is all probably a little over the top for a simple stereo system, the controller becomes essential in a 5.1 system, and solves many of the practical problems experienced when monitoring in surround from a stereo mixing desk. 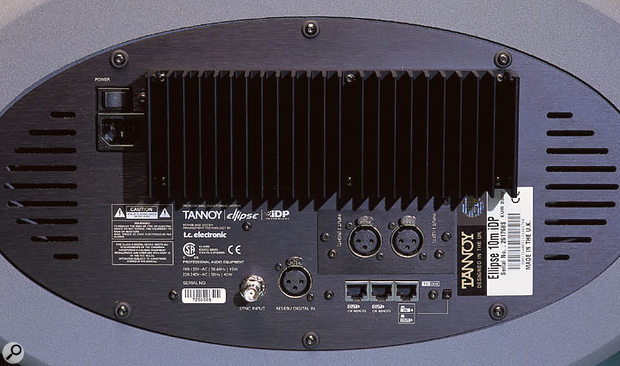 The rear panel of the standard Ellipse 10 IDP carries two channels of analogue and digital input. These audio signals are distributed around the system via the TC Link networking connections.Photo: Mark Ewing

I auditioned the Ellipse 10 IDP in two separate situations: firstly in a 5.1 studio environment, carefully aligned by Tannoy; and secondly in my own listening room as a 2.0 and 2.1 system. Hooking up for stereo was fast and easy, with just two TC Link cables to be plugged in. Positioning and aiming the speakers was easy too, because you can only see the gold dome at the back of the Tulip waveguide when directly on the correct axis.

I initially configured the setup from the controls on the side of the master speaker, and this involved allocating the appropriate role (left channel, right channel, or subwoofer) to each speaker based on its serial number. I then configured the bass-management mode and crossover frequency, and tweaked the tonality of each speaker to suit its positioning — there are presets for positions near walls, in corners, on the console, and so forth. Each speaker could also be calibrated for levels, with simple bass and treble curves as well. The subwoofer controls included parameters for polarity, phase, level, and low-pass filter frequency.

I also ran the supplied IDP Soft software on my laptop to configure the 2.1 system, although I didn't need to change any parameters from my initial setup. The software is certainly a lot easier to navigate than the control panel, and although there are no extra parameters available it does display everything in a much clearer way.

With the system set up I sat back to audition a variety of material (commercial CDs and DVD-As, as well as some of my own 24-bit/96kHz location recordings) and found the system performed extremely well. It compared very favourably with my reference passive three-way PMC IB1s (which cost roughly the same in the UK including the Bryston 4B amplifier) in terms of bass extension, clarity and stereo imaging. In fact, the resolution and ability to convey subtle detail were impressive, as the precise stereo imaging was enhanced with a realistic impression of depth. The low-frequency extension of the Ellipse 10 IDP is pretty good on its own, but the extra weight and solidity brought about by the massive subwoofer was welcome.

The 5.1 studio system was based on five Ellipse 10 IDPs and the TS212 IDP subwoofer. The particular room we used had a room mode problem which caused a hole at 100Hz, and although this could be compensated for to some extent by the system's EQ facilities, it was impossible to correct it completely — some additional bass trapping was needed. Nevertheless, when properly set up, the system delivered an excellent sound stage, with precise and stable imaging, and a consistent sound character from all quarters.

Given the room's acoustic problems, the system was configured using the advanced PC-IP program, in conjunction with a measurement microphone and some spectral analysis software running on a separate laptop. The facilities presented through this optional package are mind-boggling — in addition to much more flexible bass management and crossover facilities for the subwoofer, there is also a powerful four-band equaliser which can be used for correcting room anomalies or for voicing the speakers.

Overall I was extremely impressed with the Ellipse IDPs. The integrated control system works well and makes using and aligning a complex setup extremely quick and easy. The DSP signal processing clearly optimises the quality of the drivers and ensures tight tolerances are maintained, while also allowing some room anomalies to be compensated for with relative ease. Anyone considering an upgrade of their monitoring for serious surround-sound work should add the Ellipse IDP to their 'must audition' list.

All Ellipse IDP systems include Ellipse IDP Remote, and ship with IDP Soft and Ellipse PC-IP software utilities. Six-channel digital interfacing option can be specified for new 5.1 systems at no extra charge. Prices include VAT.

The sophisticated IDP system extracts the best possible performance and resolution from Tannoy's dual concentric drivers. A clever data network links all speakers in a stereo or surround system for remote control and system setup.