This updated entry-level pocket recorder doubles up as a USB audio interface for computers and iOS devices.

While smartphones may have sent the Dictaphone the way of the dodo, many pro and amateur recordists still have need of a convenient, compact portable WAV recorder with hardware controls and either decent onboard mics or XLR mic preamps that can supply 48V phantom power for professional external mics. And when it comes to convenience, while some of us might be happy lugging around an all-singing, all-dancing multitrack machine, others want a 'pocket recorder' — a device that literally fits in your pocket and is small enough to hold comfortably in one hand. That's a need Tascam's DR‑07X and DR‑05X aim to meet. 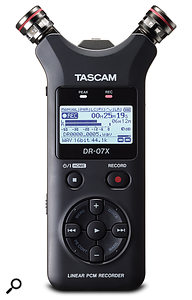 They replace the DR‑07MkII and DR‑05 in Tascam's range of portable recorders, and the idea is that everything a user needs to make a decent-quality basic audio recording is already built into these compact and lightweight devices. To make this possible in such a small package, neither recorder offers XLR inputs or 48V phantom power, and the onboard mics are permanently attached to the recorders. Although that's not always as convenient as using mics that can be independently positioned close to a sound source, the position of the DR‑07X's mics can be adjusted to change the stereo image. And should you not need even that functionality, the less expensive DR‑05X's mics are fixed in place. Indeed, the mics and their impact on the form factor of the two devices are the only things that differentiate the two models. (Here I'll focus mainly on the DR‑07X, and explain the differences between the two in more detail in the separate box.)

And despite the lack of XLR inputs, both models retain their predecessors' stereo 3.5-mm mini-jack socket. Intended primarily for connecting lavalier mics, there are nonetheless other external mics that can be connected in this way. (I should also mention that if you do have need of a more feature-rich device, Tascam's range includes several more sophisticated models, with features ranging from XLR mic preamps with phantom power to multitrack recording.)

Tascam haven't attempted to reduce the size of the DR‑07X compared with it's predecessor; it remains a bit fatter, longer and wider than my 10 year-old Olympus LS-5. But then it doesn't really need to be smaller; the DR‑07X is still nice to hold and remains shorter and narrower than a typical smartphone. Importantly, Tascam's design is at the same time spacious and quite minimal — it should appeal to people who favour simplicity and clarity, but it also has one main benefit of larger devices, in that there's plenty of space for the controls and buttons.

The controls are mostly very intuitive, though I had to check the manual a couple of times during the review. It's nice that a physical user manual is included, though note that this gives only 14 pages to each language so some functions are only partially explained — if you need more detail, you'll want to refer to the 62-page English-language PDF Reference Manual, which can be downloaded from Tascam's website. This reference manual describes a number of potentially useful functions we've described before when reviewing the previous incarnations of this recorder, so I won't detail them here — features such as, for example, level-dependent automatic recording, and recording to multiple incremental files of a specified size.

Most operations on the DR‑07X are enacted via a circular panel of buttons on the upper surface, which behaves a bit like a gaming controller. Tascam's implementation of this idea (which has also been used by other manufacturers) employs nine buttons. The Up, Down, Left and Right ones navigate the menus, control headphone and record volumes, help the user flick through audio files, and act as fast-forward and reverse buttons. In the centre is the Play button, which doubles up as a selector for menu items. And arranged in between all of these are four fixed-purpose buttons.

I can't say I've ever seriously used the tools offered by the PB Cont and Mark buttons on a Tascam portable recorder outside of a review, but should you need such facilities these allow you to set up loops and markers, and alter the playback speed of a file. It's also possible to select a section of audio and 'punch in' to record over it. A further button, Menu, makes it possible to access all the record, play, I/O and system settings. Finally, Tascam have minimised the pain and time involved in navigating sub-menus by including what they call a 'Quick' button. This brings up menu items that are related to the current operating mode — and this can be a real time-saver.

Overall, this circle of buttons is very neat and effective, and it's hard to make an argument for having any further dedicated buttons for specific functions, even though there's potentially the panel space necessary to host some.

If you've used any of Tascam's other portable recorders in recent years, the DR‑07X's screen layout will seem very familiar. It's not the biggest display and there's a lot of information crammed into it, but it is bright, sharp and accurate enough to make it easy to monitor important things like recording levels. At the top of the screen is one LED that warns when signals peak too high and another that shows the record status. Recording is primed and started using one of the few dedicated buttons, found at the foot of the screen. Adjacent to that is a final control that acts as On/Off (when held down for a time, so that you don't switch the recorder off accidentally).

On the right-hand side of the recorder, a slot accepts micro SD/SDHC/SDXC cards of up to 128GB. In fact, you'll need a card to start recording — and you'll have to buy this separately if you don't already have one, since Tascam don't include a card as standard and there's no internal memory either. This seems a bit stingy to me, since previous recorders I've used have either been fitted with some internal memory or have shipped with a small (eg. 2GB) card as standard, so that you have everything in the box that's required to start recording. Apart from the hard-copy user manual and two batteries, there are no accessories included at all — there's no memory card, no wrist strap, no wind shield and no protective bag or carry case.

Such things are available separately, though, including a mains power adapter, an external battery pack and a lavalier mic, and there seem to be several resellers who offer packages comprising the recorder and various different accessory bundles, including an SD card and both Tascam's and third-party accessories. In the interests of balance and fairness, I should point out that it's arguable that Tascam's minimalist approach to the bundled accessories allows the price to be kept down for those who already have the accessories they need — but I'd still have preferred to see some storage included!