This device packs 32 channels of bidirectional analogue‑to‑Dante conversion in a 1U rackmounting box...

Audio‑over‑IP (AoIP) has become very popular for large audio installations. Of the current crop of audio networking systems, Audinate’s Dante interface, which routes up to 512 audio channels over a standard Ethernet network, is rapidly becoming the de facto interface of choice, especially in broadcast and live‑sound applications. But it holds potential for anyone wanting high I/O counts in the music studio too, particularly for multi‑room setups or if future expansion is likely. In fact, the catalogue of Dante‑licensed manufacturers currently exceeds 250 entries and reads like a Who’s Who of the professional audio industry. One of the most familiar names in that list is Tascam, who presently offer four Dante‑capable products. Three are audio recorders (the solid‑state, 64‑channel DA‑6400 and stereo SS‑R250N, and the SS‑CDR250N solid‑state/CD recorder), while the fourth device — and the subject of this review — is a multichannel, bidirectional analogue‑to‑Dante converter.

This neat 1U rackmounting A‑D/D‑A converter box is available in two versions, the 16‑channel ML‑16D and the 32‑channel ML‑32D, and it is the latter of these that I was sent to evaluate; the two units are identical apart from the smaller model having only one group of 16 signal indicators instead of two, and half the number of analogue I/O connectors on the rear panel.

Physically, the ML‑32D is constructed to very high standards indeed, and this alone goes a long way towards justifying its price. Internally, 16 A‑D and 16 D‑A converters are accommodated on a large SMD circuit board occupying the rear of the case, with a second identical board mounted directly above in the 32‑channel version. All of the housekeeping and metering functions are taken care of by a second, smaller, control processor board near the front, with a compact switch‑mode power supply module alongside. The physical Dante network interfacing is handled by Audinate’s elegant and extremely cost‑effective Brooklyn II mini‑PCI format circuit board — an off‑the‑shelf design which is employed by a great many manufacturers to provide instant and guaranteed Dante compatibility to their products.

Rear‑panel connectivity comprises the ubiquitous multi‑voltage IEC inlet (accepting 100‑240 V AC), with eight 25‑pin D‑sub sockets for the balanced line‑level analogue inputs and outputs (four in the ML‑16D model). As you would expect, the D‑subs are wired to Tascam’s own convention which is now formally standardised as the AES59 (analogue) format. A trio of recessed DIP switches sets the analogue operating level such that digital peak level (0dBFS) corresponds to +24, +22, +20, +18 or +15 dBu in the analogue domain. Such a comprehensive range of operating level options ensures these converters can be installed and aligned to match any broadcast or studio standard anywhere in the world.

DIP switches on the rear panel allow you to set the ML‑32D’s analogue operating level.

The Dante interfacing consists of a pair of RJ45 sockets which can either be used for independent primary and secondary network connections to build a redundant network configuration (with each Dante’s primary and secondary connections going to completely separate network switches/hubs), or they can be used as linking connectors in a daisy‑chained setup without any network switches/hubs. The required configuration is established in the system’s Dante Controller setup screen (whether that’s in a mixer, or computer, or wherever). Each RJ45 socket incorporates a pair of LEDs to signify an active connection and when a gigabit Ethernet network is detected.

Moving around to the front of the unit, a proper power on/off button sits at the left‑hand side, and either one or two 16‑channel metering windows are on the right. The input metering is very simple, comprising just a pair of LEDs for each channel. The lower one illuminates whenever the level exceeds ‑60dBFS, and the upper one when the analogue input is overloaded. Below these, another single LED is provided for the corresponding output channel, again illuminating when the output level exceeds ‑60dBFS. So, essentially, these LEDs simply show when a signal is present and if an input overload has occurred, the assumption being that any critical level setting will be done using source/destination equipment (ie. mixers, DAWs etc.).

Just left of the front panel’s centre is a group of four status indicator LEDs, with the sample rate being shown on three of them signifying 44.1kHz, 48kHz, or double rate (x2). A lone ‘Status’ LED lights blue under normal conditions, but flashes red at different blink rates if there’s a problem with the Dante connection (faulty interface module or network error), and shows a steady red when the system mutes (such as when waiting for the network clocking to stabilise). A blinking blue light indicates that the system has switched to the redundant network connection because the primary network has failed.

The only thing to configure locally on the ML‑32D is the analogue audio operating level; everything else is done via the network’s Dante Controller — and by ‘everything else’ I mean the required sample rate and word length, the I/O channel identification labelling, and the audio‑routing modes and paths between the converter’s analogue inputs and outputs and any other equipment on the same network. Once configured, these settings are automatically stored in each item of Dante hardware so that the system reboots to the previous condition after a power cycle.

Dante devices, and individual channels within a device, can also be named uniquely to aid identification, and the network latency established to ensure total stability. The latency options range from 0.25ms in a system with a single gigabit network switch, up to 1ms for a very large network with 10 network switches. There are also 2ms and 5ms options for 100Mbps networks and really large and difficult installations!

To test the ML‑32D, I downloaded Audinate’s Dante Controller program, which is free and available in versions for Mac and Windows. Once installed on my Windows 7 PC, it instantly found the ML‑32D on my local area network and I was able to configure the unit to route the signals from its A‑D converters across the Dante network to its D‑A converters, allowing me to test its performance in an analogue‑to‑analogue round trip.

To access the audio signal in a software DAW it is necessary either to install a physical Dante network soundcard in your computer, or to download the Dante Virtual Soundcard (DVS), which is a paid‑for item with a free 14‑day trial. The DVS software makes the Dante network look like an ASIO/Core Audio interface to the computer’s DAW software, providing direct access to all the system inputs and outputs. 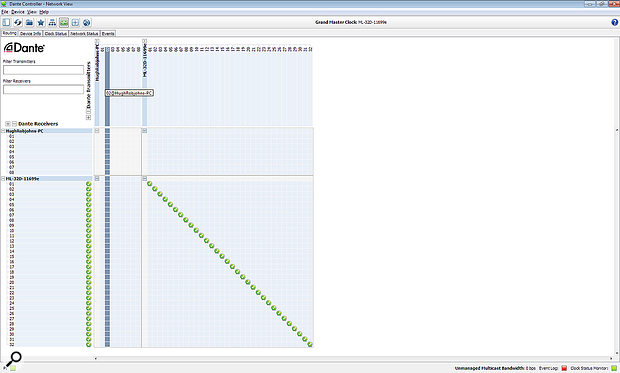 The first thing I noticed was that with the DIP switches set for a peak level of +24dBu, the converters actually clipped at +24.0dBu but were clean at +23.9dBu... which seems a little mean! However, the frequency response provided the usual ruler‑flat trace with a low‑frequency ‑3dB point at 7Hz (or ‑1dB at 10Hz), and THD measured fractionally below 0.001 percent, which agrees with the published specifications. Crosstalk at 10kHz was below 110dB which is very good indeed, and the signal to noise ratio (ref +23.9dBu) measured 109.3dB unweighted, or 112dB with A‑weighting. This also agrees with the published specifications and sits comfortably with the AES17 dynamic range performance (measured with the A‑D and D‑A chained together) of 112.3dB A‑weighted.

While these specifications fall well below the current state of the art of the latest converter systems — which are reaching A‑weighted AES17 dynamic range figures above 120dB now — the performance of this Tascam Dante interface is still far more competent and capable than any broadcast or live‑sound application is likely to require, and it crams a lot of audio channels into a very compact space for a very reasonable price.

Of course, the test measurement figures are all well and good, but what really matters is what the thing sounds like — and I found the ML‑32D to be perfectly clean and neutral‑sounding, with a very low noise floor and no hint of any sonic character of its own. The round‑trip latency from analogue input to analogue output in my system, connected via a single gigabit switch, was 1.05ms. As expected, travelling into the DAW and out again via the Dante Virtual Soundcard software raised that roundtrip latency to a little over 6ms. It’s worth noting, though, that a hardware Dante network interface on the computer (or a hardware mixer) would have been substantially faster. The DVS option is typically used on a laptop to provide a simple ‘snoop’ recording platform across a Dante network and for checking routings — situations where a little extra latency isn’t a problem.

Overall, the Tascam ML‑32D is a well‑designed and implemented multichannel Dante interface which is simple to configure and install, and which worked flawlessly during the review. The technical performance was very creditable, if not pushing the boundaries of converter technology, and it proved rock solid and consistent during my testing.

Dante‑compatible converters with 16 or 32 channels are also offered by, amongst others, Focusrite, Lynx, Ferrofish, Glensound and Attero Tech.

A 32‑channel A‑D and D‑A converter with Dante interfacing, built to very high standards in a slim 1U rack case. This is a no‑nonsense design that offers flexible analogue I/O peak level options, and is very easy to configure via a Dante controller on the same network.