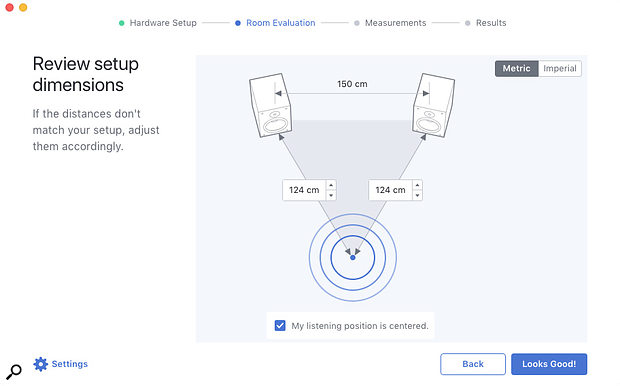 Screen 1: The first step is to input your room and speaker‑placement dimensions. Asymmetric listening setups can be accommodated.

Sonarworks software has been widely lauded for its ability to correct the sound of headphones. Can it do the same for monitors?

My colleague Sam Inglis reviewed the headphone calibration elements of the new Sonarworks 4 package back in the February 2018 issue of the magazine, but it is also designed to analyse and correct the quirks of monitor speakers and room acoustics, and a look at this aspect of its operation has long been on our list of things to do. Sam’s conclusions on Sonarworks’ ability to improve headphone monitoring were entirely positive, but there’s no denying that the technical and psychoacoustic challenges inherent in correcting the response of monitors and listening rooms is a whole order of magnitude or two greater, so it will be fascinating to see how things pan out.

Before I get to describing how Reference 4 performs, however, I think it would perhaps be useful to examine what happens when a monitor plays audio in a room, and why there might be any need for ‘correction’.

If we were all lucky enough to work in studio rooms of infinite size, or in rooms with boundaries that offered perfect absorption of acoustic energy, there’d be no need for applications like Sonarworks to compensate for room acoustics because we’d always hear just the flat, direct sound from the monitors. In the real world, however, we hear not just the direct sound energy that leaves the monitors, but also energy reflected from the room boundaries. And that reflected energy will be imprinted with both the off‑axis response of the monitors and the particular absorption characteristics of the room boundaries it has reflected from.

The way our ears and brain deal with these multiple arrivals of sound energy depends firstly on how far apart in time they are, and secondly on their relative levels. Reflected sound that arrives within a few milliseconds of the direct sound, known as early reflections, will be integrated by the brain, and although the direct sound will still dominate, the tonal character perceived for the audio event will be a composite of the direct sound and early reflections. But reflected sound, thanks to the fact that it has travelled further and is delayed, will also interfere with the direct sound. Sometimes the interference will be constructive, and a response peak will result, and sometimes it will be destructive, which will result in a response dip. It is these peaks and dips that Sonarworks aim to equalise and flatten.

Along with boundary reflections, real‑world rooms also play host to resonant standing waves, defined generally by the distance between room boundaries, and these will result in significant peaks and troughs in volume level at different locations in the room. We’ve all no doubt experienced the phenomenon of moving the listening chair back away from the monitors and finding that the volume level of specific low frequencies changes. That’s a result of standing waves between room boundaries. Standing waves will occur at frequencies where the dimension between boundaries equals half the wavelength (and multiples of it), and it’s not rocket science to do a quick measurement of your studio room dimensions to identify some frequencies that might cause trouble.

My room, for example, has a ceiling‑to‑floor dimension of 2.5m. Knowing that the first standing‑wave frequency can be calculated through dividing the speed of sound (343m/s) by twice the room height (ie. half the wavelength), I ought to expect one series of standing waves starting at 68.6Hz. The side walls and end walls will, of course, also potentially create standing waves. As illustrated on the room mode calculator at www.sengpielaudio.com/calculator-roommodes.htm, there are multiple potential standing‑wave modes in any given room. Like fingerprints, no two rooms are ever the same. As with the response anomalies caused by early reflection interference, Sonarworks attempts to equalise the effects of low‑frequency standing waves at the listening position.

Describing the basics of room acoustics in just a few paragraphs is possible only by lightly scratching the surface and by almost completely ignoring the field of psychoacoustics. For example, I wrote that the brain integrates direct sound and early reflections and perceives a composite tonal balance. Well, whole books have been written on that subject alone, so when we consider using technology such as Sonarworks to ‘correct’ for room acoustics, it’s important to appreciate that while the technology may be able to flatten the measured frequency at the listening position, doing so begs a whole host of deeper psychoacoustic questions.

So far I’ve majored on discussing room acoustics, but Sonarworks also corrects monitor frequency response anomalies. Just as with psychoacoustics, there’s no shortage of pages on the myriad phenomena that might cause a speaker to have a non‑flat frequency response, so I’m not going to head off down that diversion now (maybe that’s the subject of some future feature). We, after all, have lives to lead and more important things to do.

In fact, while Reference 4 corrects both room and monitor anomalies, it really has no way of distinguishing between them. Having said that, it’s reasonably safe to assume that with the majority of monitors in the majority of rooms, in the nearfield anyway, anomalies below, say, 500Hz to 1kHz are more likely to be down to the room, while those higher up are more likely to call the monitor home.

The reasons for this are twofold. Firstly, as frequency rises, room reflections are generally more easily attenuated or diffused by either the general clutter of stuff or intentional room treatment. Secondly, while monitors are typically omnidirectional below around 300Hz, as frequency increases they become increasingly directional, so simply don’t spray so much audio energy in the direction of nearby reflective boundaries (the special case here is desk reflections, which can be significant up to higher frequencies).

It’s probably time I described the package and how it works in practice. There are effectively four elements to Sonarworks’ system. First, there’s the measurement application that analyses the monitor installation and creates response correction curves for each monitor of the pair. Second is the Reference plug‑in, which can be dropped into a DAW monitor output channel and into which correction curves can be loaded. The plug‑in comes in AAX, Audio Units, RTAS and VST2 formats, and in my Pro Tools v12.5.2 installation it worked first time without any issues. Third, there’s the Sonarworks Systemwide stand‑alone application that enables correction curves to be applied outside a DAW environment. Systemwide is a relatively recent Sonarworks development that, in effect, functions as a virtual soundcard sitting between the playback application and the computer’s sound output hardware (or external audio interface). Like the Sonarworks plug‑in, Systemwide worked without hitch on my iMac.

The Studio Edition of Reference 4 ships with Sonarworks’ XREF 20 measurement microphone.Finally there’s the Sonarworks calibrated measurement microphone. The XREF 20 microphone is a small‑diaphragm, phantom‑powered, omnidirectional device. It looks very similar to the Thomann measurement mic that I bought many moons ago, but is actually different in one really important respect: each individual Sonarworks mic has its own calibration profile identified by a serial number on the side of the body. Once the mic serial number is specified in the Sonarworks measurement application, the appropriate calibration curve is automatically downloaded and installed. Oh, and just because the XREF 20 is called a measurement mic, there’s no reason why you can’t use it for recording. So buying the Studio Edition of Sonarworks will increase the contents of your mic cupboard by one.

The Measure Of It

The Sonarworks measurement application first presents some simple setup dialogue boxes that walk you through specifying a microphone, selecting the I/O channels and setting the output level and mic gain. More dialogue boxes then ensure that the left and right channels are correct, and then a timing‑based measurement signal confirms the distances between the monitors and from each monitor to the primary listening position. The listening position ought to be equidistant from the monitors, of course, but Sonarworks is able to accommodate and correct for asymmetry. Screen 1 (above) illustrates the result of these layout measurements in my room.

Once the setup stage is complete, the real business of measuring the monitors and room gets underway. The software creates its correction curves by measuring the frequency response of the monitors at 37 different positions around the listening position using a swept sine‑wave signal.

Screen 2 (below) illustrates the display at stage nine of the process. Throughout the measurement process, Sonarworks guides microphone position in real time by sending click signals alternately to each monitor and analysing the click arrival times at the microphone to establish the correct microphone position. As soon as the microphone is positioned correctly for the next measurement the timing clicks stop and the sine‑wave sweep automatically begins. At the end of the process, which takes around 20 minutes, the measurement utility displays the effective frequency response at the listening position for each monitor, calculated through a weighted analysis of the 37 measurements. Sonarworks then creates and saves the correction curves, which are basically the inverse of the response curves. 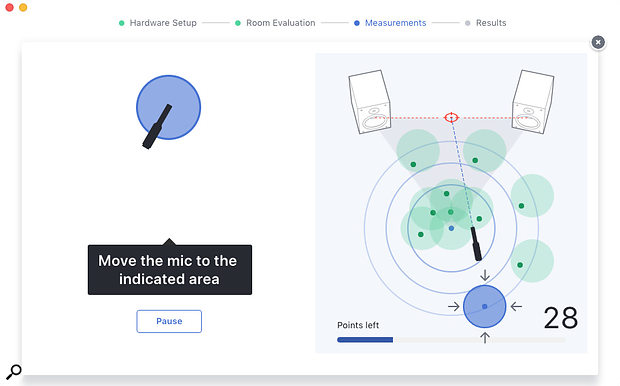 Screen 2: The measurement process involves moving the mic to 37 different locations in the room.

Screen 3 shows the Sonarworks Systemwide window with the default correction curves loaded for my default KEF LS50s monitors, placed as usual on sturdy wall brackets either side of my iMac screen in my usual studio room. For a bit of clarity I’ve chosen to display data for just the left channel, but you’re missing little in not seeing the right channel because it is very similar.