Does an all-analogue, 1989 design still have a place in the world of convolution and modelling-based guitar recording products? Get ready to be surprised by the reissued SansAmp Classic. 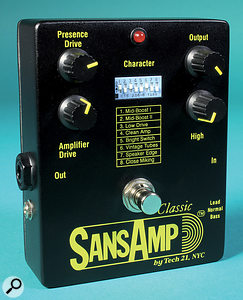 original SansAmp is back! NYC-based guitar player and electronic designer Andrew Barta's ground-breaking, FET-based guitar-amp-and-speaker simulator, first launched in 1989, had been discontinued for a number of years — apart from a limited-edition run of 500 '20th Anniversary' models in 2009. Now, though, it's available again as a production model. This version uses identical circuitry to the original, and I, for one, am immensely grateful for its reappearance, as my own much-used example 'disappeared' from its place on top of my amp after a gig a few years ago. It may only have been my back-up rig on stage, but it was a mainstay in the studio and remained my DI-guitar-recording box of choice, despite the arrival of the modelling generation of Line 6 and their imitators.

The all-analogue circuitry means zero latency, making it ideal also for parallel processing on a range of signals, from bass and drums to vocals — in fact, anything that might benefit from the addition of a highly controllable dose of tube-like warmth and character. Although often now modelled in software, I, and its many big-name users around the world, would still contend that there is something very special about the hardware version of this box, which is featured in countless iconic recordings throughout the '90s and beyond.

These days, we're all used to the concept of DI'ing electric guitars for recording, but it is easy to forget that DI'ing was initially something that was only done by those intending to achieve a sound that was very different from that of a miked amplifier. Tom Scholtz's Rockman units of the early '80s were the first devices to try to replicate the complete recorded sound of a tube amp and close-miked speaker. The relatively simple circuitry — a compressor, a clipping stage and a steep filter — didn't actually get very close, to my ears, but that didn't stop a lot of players from using them.

The SansAmp, however, took the amp-and-speaker-in-a-box concept to an entirely new level of sophistication. Its design incorporates a complete, miniature, push-pull output stage, combined with a preamp, plus emulation of the characteristic response of a typical guitar speaker, with further response shaping from a microphone and its placement. The effects of a phase-inverter stage and output transformer were also simulated, all in solid-state, analogue circuitry. The prototype incorporated an eight-way DIP switch at its heart, apparently just to help the designer home in on the best sound for DI recording, and the story is that he was persuaded to retain that in the final product by one of his 'big-name' test guitar players. Thus, one of the most distinctive and important features of the idiosyncratic original SansAmp was born. Finding that no-one wanted to licence and manufacture his invention, Andrew Barta decided to make it himself, using the name Tech 21, and raised the bar in the field of direct electric guitar recording to a new level.

If the DIP switches, labelled Mid Boost I and II, Low Drive, Clean Amp, Bright Switch, Vintage Tubes, Speaker Edge and Close Miking, weren't considered entirely intuitive by guitar players in 1989, the other controls functioned in slightly unfamiliar ways too. Presence Drive governs, in effect, saturation in the preamp stage, controlling both gain and tonality, while Amplifier Drive determines how hard the virtual power amp stage is working. Output simply sets the output level, but the powerful High control can be used for optimising the output to work with a wide range of destinations, as well as acting as a conventional brightness control. A side-mounted toggle switch, designated Lead, Normal, Bass, determines the fundamental tonal shaping of the preamp, corresponding to a Marshall-like bass-cut; a mid-heavy, Boogie-like response; and the mid-range dip typical of some Fender designs. 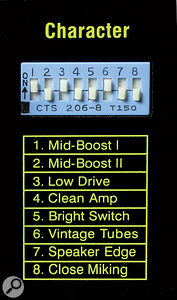 The unique switch-based voicing control makes the SansAmp remarkably versatile, if a little tricky to figure out at first.

The SansAmp's 9V battery-powered stomp-box format, complete with footswitch, belies the fact that it's rather more suited to table-top use, certainly in a recording context. The DIP switches may have been conceived as 'set-and-forget', but they're actually a key factor in getting the most out of the unit. Different preamp and power-amp drive amounts offer many different shadings of tonality, but there are always greater subtleties to be found by working those controls in combination with different switch settings.

The SansAmp excels at highly saturated guitar sounds, retaining a remarkable touch sensitivity at very high gain settings. The dynamic response is far more amp-like than that of any modeller I've tried, cleaning up and altering tonality in just the right way on both individual notes played softly and with the guitar's volume backed off. Once the sound is in a mix, there's very little that I ever want to do to it, beyond perhaps just a little of an early-reflections program to give a sense of scale. It's invariably just 'right' as a recorded sound. Some people say that it lacks bass, but to me, it lacks only the kind of bass that I always remove from my recorded tracks to make them sit in the mix — in my experience, the impression of bass that comes from low-end resonance is far more useful than actual bass, with electric guitars.

When it's terminated with a line input, and with the output control at between 50 and 75 percent, self-noise at high-gain settings is surprisingly low and comparable with a real amp, speaker and mic combination. With cleaner settings, where the influence of a real speaker becomes a more important element in the overall picture, the sound is less convincingly real, I find, but still characterful and eminently usable.

The original SansAmps were built using an unusual hybrid technology — metal evaporated onto a ceramic substrate, with the resistors being formed by laser cutting — and while the Classic uses exactly the same 1989 circuit, some more modern materials have been used to facilitate its production in 2012. The important thing, however, is that it seems to perform in exactly the same way, so the feel and the sound are every bit as good.

If you've never played with one before, I recommend that you give the SansAmp Classic a try, either for its host of general studio applications, or because you have never quite got on with modelling units and are still seeking a DI-recording solution. The unique control and switch line-up actually offers a remarkable degree of versatility, which is both a strength and a weakness — there are no presets to help you out, and some setting combinations are best avoided unless you are actively seeking something 'nasty'! Like a good instrument, the SansAmp Classic will repay time spent getting to know how all its parameters interact, but until you are fully familiar with it, the settings in the printed user guide make good starting points for experimentation. There have been many imitators since 1989, not least a host of amp-emulation pedals from Tech 21 themselves, and the many modelling and convolution-based products now on the market, but to me the original SansAmp, and its Classic reissue, still offer a unique voice amongst DI guitar-recording options.

Tech 21's own Character series of pedals are an option if you want to stay in the analogue domain, but at this price you could also have anything up to a top-of-the-range Line 6 Pod HD, with a ton of presets and effects — if you're happy enough with the sound and feel of a digital modeller.

A uniquely warm-sounding, touch-sensitive guitar amp and speaker sim, with a host of other uses around the studio, too. A Classic, indeed!