The Telefunken drum-mic kit arrived to a small buzz of excitement in the studio. The Telefunken marque has always been associated with quality sound and construction, so releasing a set of drum microphones didn’t seem to sit in with this high-end, normally vocal-microphone-driven market. Telefunken however, like many other manufacturers, cottoned on to the fact that there have been huge gaps in the microphone market for a long time, and while other manufacturers started selling drum microphone kits some time ago, these have always tended to be somewhat downgraded affairs in order to keep the kit price reasonable. So how have Telefunken fared? Have they gone the same way or headed for the top end of the market?

Having a kit of microphones like this has many advantages. It gives you instant access to a set of microphones designed to do a specific job. It also hopefully gives you a clear and coherent sound across the whole drum kit, with microphones designed to bring out the best in each kit element. Which microphones the manufacturer chooses is usually a reflection of their speciality. Companies go down different routes supplying complete kits, including overheads, but Telefunken have instead provided a basic set that covers kick drum, snare and two (DD4) or three toms (DD5). This really is the bare minimum anyone will ever need. We were sent the DD4 set, with just the pair of tom microphones. Luckily our guest kit had only two toms, a mounted rack and a floor tom. We did have an extra snare to contend with, but luckily we had no shortage of in-house microphones.

To supplement the Telefunken we added an extra boundary mic in the bass drum, and a selection of condensers on snare bottom, hi-hat, overheads and room mic.

On first examination all the microphones have a certain classy look about them. They come in a range of grey to black shades — the kick mic in black, snare in dark grey and toms slightly lighter. The bass-drum mic is actually vaguely reminiscent of a Neumann U47 in shape. All the microphones share a solidly engineered look; the iconic Telefunken badge does not look out of place on the weighty metal shells.

The general quality of finish on the set I saw was pretty high, looking like something that was crafted rather than just churned out. The big question, however, is how did they sound. I’ll take a look at each microphone individually.

Can I Kick It?

It is traditional to start with the bass drum. The M82 bass drum microphone that is included in the kit is a substantial affair — only just narrower than the hole in the bass drum we were trying to place it through. It is cylindrical, 155mm long with a diameter of 63mm. This houses a 32mm dynamic moving-coil capsule. With a stated frequency range of 25Hz to 18kHz, it is able to stand sound levels in excess of 146dB. This chunky mic needs a sturdy stand though, and is not that easy to manoeuvre into position; I found the mount was more restricting than some as it seemed to offer less than 90 degrees of adjustment. This tends to leave the mic stand needing to go in front of the drum rather than tucked alongside. Not a problem in the studio, but on tight stages...

It has two EQ switches: the first of these engages a passive filter that reduces some of the low-mid frequencies around 350Hz, the second switch introduces a high boost which tilts the upper mids and highs, rising from 2kHz and eventually resulting in a 6dB boost at 10kHz. These are both very useful and clearly marked. I must admit to invariably favouring the low-mid cut, and the M82 sounded great with this switched in. The high boost was more a case of personal preference, but it does help if you are looking for a more aggressive modern sound. It will suit some users more than others but is a handy feature.

Time to turn our attention to the other two models in the range. The M80 SHB is recommended for snares, and also for vocals where a compact microphone body is required. As it has a built-in mic clip on the side it would be awkward to hold, but for stand use it would be ideal. The frequency response, as you can imagine, has been tailored for its two intended roles, and it has been designed to minimise the proximity effect. It has a stated range for 30Hz to 18kHz, and a supercardioid pick-up pattern. It features a gently rising top end which helps capture the snares nicely. Able to handle SPLs in excess of 140dB, it should be able to cope with even the hardest-hitting drummer. Certainly, in our test, it didn’t seem at all bothered by even the punchiest rimshot. 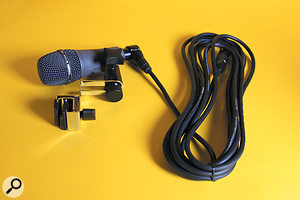 Each mic ships with its own mounting hardware (both plastic and, as pictured, metal) and 5M right-angled XLR cable.All in all it seemed to do the job well. This is however a really crowded market and I am not sure what the M80 offered over some of the more traditional choices of our mics case. In its favour, though, is a very solid construction and really nice finish.

Tom-toms are handled with a variant of the M80, called the M81 SH. Similar in appearance to the snare mic, it has the same textured powder coating but in lighter grey. This provides a more distinctive look and, once again, the construction is solid and impressive. The M81 differs from the M80 in that it has been designed without the rising high end, and so has a flatter overall response. This does lend the microphone well to toms, giving it a generally tight sound.

Having a short body makes it is easier to get this of microphone into relatively tight places, but they are still not that compact compared to other models in the market. It was, however, relatively easy get a good sound from the mics quickly and easily.

Telefunken have bundled in a few important extras with the kit. Not only do the microphones come in a very robust plastic hard-shell case, they also come with a variety of drum mounts. The M80 and M81 can be mounted on the drum rim using either the plastic clip-on mount, or the metal thumb-screw mount. Why two types of mounts were needed I am not sure, although the metal mount was more flexible as it could be used in a greater number of ways.

The mounts hold the microphones OK, but they are quite heavy mics so you need to make sure the weight is distributed evenly or they may sag. The microphones also come with some nice 5M mic cables that are terminated at one end with a right-angled XLR connector. This has the major advantages of making the microphones less obtrusive, easier to place securely, and putting less weight on the rear of the microphone. The overall look with the cables in place is very neat, and the logo on the connector adds to the classy appearance.

As individual microphones they all perform well, particularly the M82 on bass drum. However, as a set, the added bonus of the clips, cables and the uniform sound they are able to provide is a draw. If I was investing in a mic set for the first time this would be a serious contender. It is not a particularly cheap set, but it will be with you for a long time and could easily prove to be a very wise investment over the years. I had absolutely no problem using these, and the addition of cables and clamps is very sensible and gives you a professional case of mics that should cope with most jobs easily.

Many microphone manufacturers sell sets intended for drums, notably Audix and AKG, but few are of this quality and come with such a useful set of extras.

A quality set of microphones that should last a very long time, and comes with an excellent supply of useful accessories.