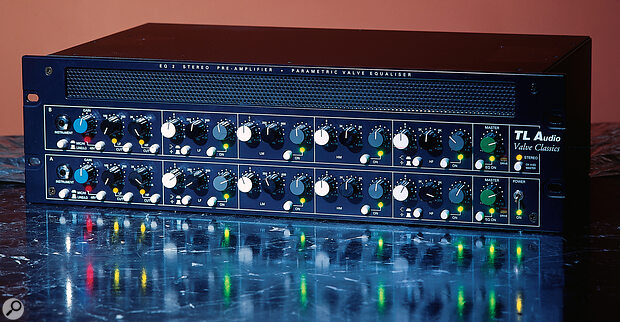 TLA's dual-channel EQ2 combines the functions of a mic/line/instrument preamp with a four-band, parametric equaliser. One very unusual but welcome feature is the ability to link the channels so that both sets of parametric equalisers can be controlled using the knobs of one channel. As with all TLA's tube units, the circuitry also includes some solid-state devices, with the aim of combining the tonality of valves with reliability and cost-effectiveness.

Housed in a well-ventilated 3U rack case, the TLA EQ2 uses a solid-state preamp with separate XLR inputs for mic and line. There are also unbalanced jack inputs and outputs for line-level use, plus a further aux jack input accessed via the front panel that can be used with electric guitars, keyboards and similar instrument-level sources. The mic amp offers up to 60dB of gain, while the line input can handle signals in the range -20 to +20dB. Phantom power can be switched independently to the two channels and a button selects mic or line operation.

Also in the input section is a pair of variable-frequency, 12dB/octave high- and low-cut filters, each individually switchable in or out of circuit. These offer frequency ranges of 30Hz to 1kHz for the high-pass filter and 1kHz to 25kHz for the low-pass filter. These shelving filters remain independent, even when the main body of the equaliser is switched for stereo operation. The main equaliser is a four-band, fully parametric affair with a valve stage for each EQ section. Both the high and low sections may be switched to either shelving or band-pass operation, but otherwise the control system follows the usual gain/frequency/bandwidth setup with a ±15dB gain range. Q is variable from 0.5 to 5, though the knob scale is not calibrated so you have to adjust this by ear. The lower two parametric sections cover frequency ranges from 30Hz to 3kHz, while the higher two can each cover 1kHz to 20kHz. This provides plenty of overlap between the bands and also allows two filters to be stacked at the same frequency should this be necessary, as may be the case when you need to create a very deep notch. Each band has its own bypass button with green status LED.

At the end of the signal chain for each channel is a master section comprising a gain control (±15dB range) and a master EQ On button. A stereo linking button is located above the mains power switch and enables both equalisers to track the channel-A knob settings. As pointed out earlier, this doesn't link the high and low-pass shelving filters at the front end. A peak LED warns of impending clipping while an amber Drive LED shows when the valves are being driven hard enough to impart a little character to the sound.

Like all the TLA products I've tested over the years, this one features a very clean signal path: its 10Hz to 40kHz frequency response no doubt helps keep the sound solid and transparent, as does thehigh-headroom circuitry. The front end is similar to that used in some other TLA units and performs exceptionally well. It is clean, quiet and doesn't colour the original sound. What's more, most equalisers don't have a preamp front end at all, which makes the TLA EQ2 a very useful all-rounder for both tracking and mixing.

The equaliser itself has the smooth, open sound of a well-executed design and offers a wide range of adjustment. It's possible to apply quite generous amounts of boost without pushing the basic sound too much out of shape, and the valve circuitry adds a little tonal support if you drive the unit fairly hard. As with all good equalisers, you can add brightness without losing smoothness and you can bolster the bass end without losing definition.

The TLA EQ2 is certainly a nicely designed, sweet-sounding piece of kit and combines a well-specified front end with a powerful parametric equaliser. Its unique selling point is its ability to link both channels for control from a single row of controls, which is immensely helpful when you're working on stereo mixes.

This isn't at the budget end of the TLA range, but I feel that it's fairly priced if you look at it as a classy mic/line/instrument preamp and an equaliser sharing the same box. Admittedly the mic amp doesn't have the proper metering you'd expect from a stand-alone front end, but you can get by using the Drive and Clip LEDs as rough-and-ready level indicators. There are several other equalisers that sound as good for a little less money if you don't need the front end, but for the studio owner needing a single piece of kit that can function as mic channel, DI box, mixing equaliser and mastering equaliser, the TLA combination makes a lot of sense.

A genuinely useful combination of a high-class front end and a very musical equaliser.