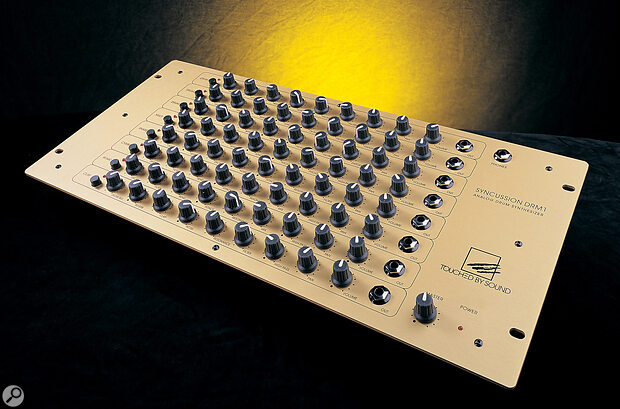 If sparkling analogue drum sounds are what you need to turn your tracks to gold, Germany's Touched By Sound company may have the answer in the form of the DRM1 eight-piece analogue drum module.

Touched By Sound is a young German company which first came to my attention when I surfed to their web site to view pictures of the forthcoming Mephisto analogue polysynth. A dazzling apparition in silver and wood, bearing motorised potentiometers, it is already a source of drooling anticipation to get-a-life saddos such as myself. It was, therefore, a surprise when TBS chose to introduce themselves to the UK not with an analogue synth but with an analogue drum module — the DRM1 Syncussion.

The DRM1 is a rackmountable source of analogue drum sounds ready to be triggered from MIDI drum pad or sequencer. Its golden finish seems to have the magical ability to render other studio gear dull and drab before your eyes, and with a soft-feel black knob for every function, it is both pleasurable and easy to operate. The recessed rear panel features MIDI In and Thru plus the stereo mix output and external power connector — there is no mains switch. The DRM1 gets its energy from that reviewer's bane, the wall-wart external power adaptor; the review model had a two-pronged Euro type, but a proper UK adaptor should be supplied with any units sold here.

If racked, the Syncussion occupies five rack spaces. Its analogue circuits are designed to create eight separate percussion voices, each with nine knobs to shape their sound. The emphasis is on simplicity of operation with a control for every function and nothing hidden, making it a refreshingly straightforward device to handle. Indeed, its manual is a single A4 sheet and once you've checked the (tiny) MIDI implementation section, the best way to explore the Syncussion is to play with it. Which I did.

Each drum has an individual output socket, accessible from the front panel: plugging into any drum's individual socket subtracts that drum from the main mix. Each drum also has a manual trigger button, allowing auditioning (at a preset three-quarters of maximum velocity) without need of a MIDI connection — invaluable when tweaking the sounds. Naturally, the drums respond to the full velocity range via MIDI. With a headphone socket (which emitted a high-pitched electronic whine through my headphones) and master volume control, the front panel is complete.

In synthesis terms, the Syncussion hangs around TR808 and 909 territory, yet refrains from tackling those famous Roland beatboxes head-on. Actually, it offers far more in terms of timbral manipulation, with its matrix of 72 knobs. Two in each row are dedicated to volume and pan, but the rest modify elements of the sound carefully chosen for maximum variation of each drum type. Sadly, there are no patch memories to store any great sounds you make.

The DRM1 has a very simple MIDI implementation — too simple, really. It responds to MIDI notes (by default on channel 10), with the eight drums being allocated specific note numbers. These can be changed by holding any of the black trigger buttons on power-up then playing notes on your MIDI controller. The first note (and channel) sets the note for Drum 1, the second Drum 2, and so on until all eight are stored in memory. Closed Hi-Hat is automatically set to two numbers beneath Open Hi-Hat. Velocity is mapped to note volume, but there's no response to overall MIDI volume control (Control Change 7), nor can you alter any of the drum parameters via MIDI controllers or velocity. I felt this was an area where TBS should have done more: velocity control of filter cutoff or distortion amount, at the very least, would have been desirable.

The drums are arranged in rows labelled Drum 1, 2, 3, Multi, Snare, Cymbal, Hi-Hat and Clap. The first three rows (Drum 1, 2, and 3) are identical, and each has controls for Decay, Pitch, Bend, Attack, Frequency Modulation Intensity, FM Frequency, Distortion Level, Pan, and Volume. These voices are seemingly geared towards reproduction of bass drum and toms, although its inclusion of Frequency Modulation opens up a realm of seriously warped sounds more normally associated with a full-blown synthesizer. The Attack knob is found on most of the drum voices, and controls not the attack per se but the level of an initial 'pop'. When turned fully clockwise, this gives the drum added bite. Bend controls the extent to which the envelope decay modifies the drum's pitch, offering positive and negative amounts, with zero at the knob's mid position.

Achieving a decent bass thump is a simple matter of setting a short decay, low pitch and a little distortion to taste. I also created some harder kicks with the help of some high-speed FM and just a little external EQ, although an authentic, booming 808 bass drum defied either my programming talents or the machine's sonic palette — I'm yet not sure which. Toms can be programmed by raising the pitch, lengthening the decay and perhaps adding more of that wonderful FM. Adding slow FM with minimal intensity provides subtle pitch changes between hits. And if you're really barking mad, you can recreate those awful falling-pitch electronic tom-tom sounds, should you wish to do so.

The Multi drum has three built-in tones, with a global Pitch control and separate knobs allowing the pitch of two other components to be set individually. It appears that its main purpose in life is to simulate cowbells or metallic 'hammer and anvil'-type noises, but it can also handle toms, woodblocks, claves and sundry clanks and rattles. I've never quite understood the fascination for the 808 cowbell but if it appeals to you, it's relatively easy to create here.

You can't have too many good snare sounds, and the DRM1's Snare module puts many relatives of the 808/909 snare, plus a great deal more besides, just a few knob twiddles away. The incorporation of a filter with cutoff frequency and resonance controls allows you to program many synthetic snares that might otherwise tie up several modules of a modular synth. You can crank up the resonance and get a high, harsh 'snap', or extend the 'reverb' release and rotate the attack fully anticlockwise for one of those 'noise burst' snares so reminiscent of Kraftwerk or Yazoo. I thought at first that there might be a reverb chip inside, but it turned out to be an analogue bucket-brigade design, which lends an authentically vintage ambience. The noise component of the snare sound has its own decay time and the Noise knob appears to control a separate filter or equaliser for noise colour.

Analogue cymbals were typically the least realistic element in a non-sampled drum kit, and the DRM1's Cymbal has more in common with my elderly Roland CR78 than any more recent drum box. Nevertheless, it's a useable sound and one that we shouldn't mock just because it is so bizarre. It provides a fairly wide range of tones including metallic blips and noise bursts. The Bend control bends the frequency of the filter rather than the frequency of the metallic element in the sound, while the Mix knob controls the relative amounts of noise and metallic 'ring'.

Although the Hi-Hat has identical controls to the Cymbal module, it sounds quite different. It is also the only voice to be triggered by two separate (and mutually exclusive) MIDI notes, acting as Open and Close. I don't know why, but I've always preferred the sound of analogue hi-hats to the real thing, and those on offer here are just my cup of tea. TBS seem to have picked all the right controls so that hardly anything needs to be 'fixed' at the desk. The main cutoff and resonance, the high-pass filter and the mix of metallic component and noise just seem to work better in this module than in the Cymbal. If I had one wish it would be to make the high-pass filter slightly wider in its response, but it's no big deal.

I've always had an aversion to synthetic clap sounds, perhaps because it brings to mind those awful 'Stars On 45' singles where any number of unrelated tracks were pasted together with a monotonous bass drum and clap relentlessly plodding through them. My prejudice aside, the DRM1's electronic clap sound is actually as good as I've heard. Particularly of note is the clap 'speed' which (presumably) simulates the enthusiasm of the synthesized clappers. I found it worked well when shadowing the notes played by the snare drum. Using the filter and a very short decay, you could achieve a short snappy hit reminiscent of a camera click. Perhaps it might have been made more versatile by the inclusion of an overall pitch control.

The Syncussion is a welcome break from the rash of 808 and 909 wannabes, although comparison with those classics is inevitable. Fortunately, there is enough tweakability on offer to carve out original sounds of your own — and if you don't want to do this, you probably don't want a Syncussion in the first place. Likewise, construction of new kits is fairly rapid once you've mastered the controls. Some of the voices appealed to me more than others, but all can be put to work in a mix, especially if you bring into play those individual outputs and some external processing. It's probably going to be best suited to Euro-styles, techno, electro pop, and so forth because, let's face it, there's no way it'll deliver a standard rock kit!

Since the DRM1 is uncompromisingly 'hands-on', I might forgive TBS for omitting patch memories; however, if they'd provided control of individual sound elements via MIDI, it would have meant instant promotion into a new league. Nevertheless, if you are looking for a tweakable, uncomplicated and great-sounding source of electronic drum sounds, the Syncussion might be worth its weight in gold. 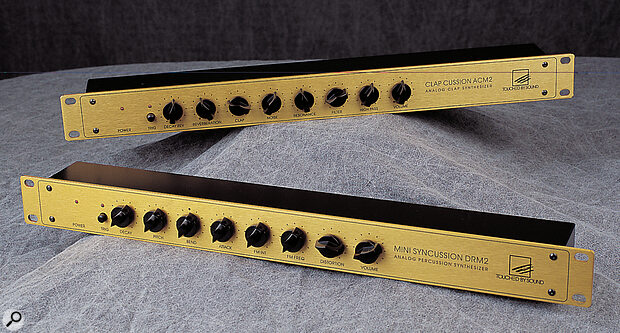 As well as marketing the complete DRM1, Touched By Sound have chosen to make the individual drums available as single rack unit devices for those who just fancy adding one or two of them to your system.

The knobs on the individual units are slightly larger, smoother and even more pleasant to use than those of their big brother. Other than that, they match the style perfectly and as a supplement to your current drum machine, they take up very little space. The only thing they lack is a MIDI Thru — something that would be handy if chaining several together.

An analogue drum machine which dares to be different, the Syncussion has a dedicated knob for every function, a classy gold appearance and individual outputs for every drum. No patch memories and no MIDI control of the parameters means what you see is always what you get.